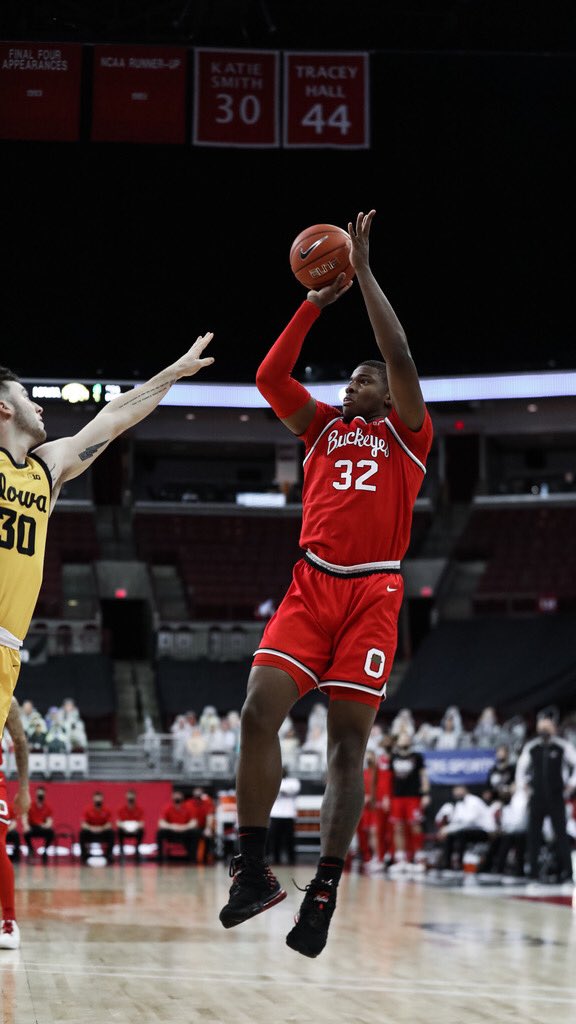 “They really played well. They clearly outplayed, us outperformed, out-coached us,” Ohio State head coach Chris Holtmann said. “We’ve got to get back to work and get some guys rested up and healed up and get moving forward.”

Sophomore forward E.J. Liddell paced the Buckeyes (18-7, 12-7) with 15 points, and fifth-year senior guard C.J. Walker scored 10 points with four assists, but it was not enough.

Senior center Luka Garza, a national player of the year candidate, throttled Ohio State to the tune of 24 points and 11 rebounds for Iowa (18-7, 12-6), while junior wing Joe Wieskamp poured in 19 points.

“We couldn’t do much, honestly. We weren’t able to take away some of his strengths when we were playing him one-on-one,” Holtmann said of the struggles with Garza. “I didn’t think we had enough detail, and some of that is we’ve got some young guys playing him. But that’s my fault, we’ve obviously got to guard him better. They had a good attack with some of our double teams, and they made shots.”

The Buckeyes and Hawkeyes battled back and forth early, and Walker drilled a pull-up jumper to cut the deficit to 10-8 just 4:15 into the game. However, Ohio State went cold, failing to make a field goal across the next 4:49 before Liddell scored to cut it to 15-11 with 10:56 until halftime.

Iowa answered with a 7-0 spurt sparked by a Garza triple and capped by four points from redshirt freshman wing Patrick McCaffery to push the lead to 22-11 with 8:03 until the midway point.

Holtmann’s squad showed life when junior guard Duane Washington hit back-to-back shots, including a step-back three pointer to cut the deficit to 32-25 with 3:29 until intermission.

However, the Hawkeyes responded with a 9-0 run, ending the half with a 42-28 lead following a 10-3 overall stretch where the Buckeyes’ only points came on an old-fashioned three-point play by Liddell.

Ohio State opened the second half with a 14-2 run on two three-pointers by fourth-year junior wing Justice Sueing, six points from Walker and two from Washington to make it 44-42 with 16:49 on the clock.

Iowa weathered the storm and ripped off a 7-0 run across the next 2:54 with a triple by Wieskamp sandwiched in between two Garza finishes to push the lead to 51-42 with 13:55 to play.

The Buckeyes did not go down without a fight, scoring five straight on a strong finish by Liddell through a foul and a three-pointer by junior wing Justin Ahrens to trail 51-47 with 13:07 left.

The Buckeyes were still very much alive but they went ice cold from the floor, failing to make a field goal for 5:50 during a 9-2 stretch where the Hawkeyes asserted their dominance to take a 66-53 lead.

Overall, Iowa played extremely efficiently and Ohio State lacked its typical firepower. The Buckeyes shot just 45.1 (23 of 51) percent from the field and 29.4 percent (5 of 17) from deep with eight assists to 13 turnovers.

“I didn’t think the ball moves very well today. I just didn’t think it moved in, and Iowa’s activity had something to do with that,” Holtmann said. “I just did not think it moved very well today, so we’ve got to take a look at it. The ball has got to move, we’ve got to take a higher quality of shot than what we took here today. And we were really, really sloppy with the ball, as sloppy as we’ve been all year.”

Sueing finished with 12 points, and Washington added seven points in the 16-point loss.

Ohio State players were not made available to members of the media after the game because Holtmann wanted to “face the music.”

“I wanted to be the one to kind of face the music here,” Holtmann said. “They’ve battled all season – they’ll be available all week, it’s not like they’re not available. I just think in this moment it’s important for me to come out here and face the music.”