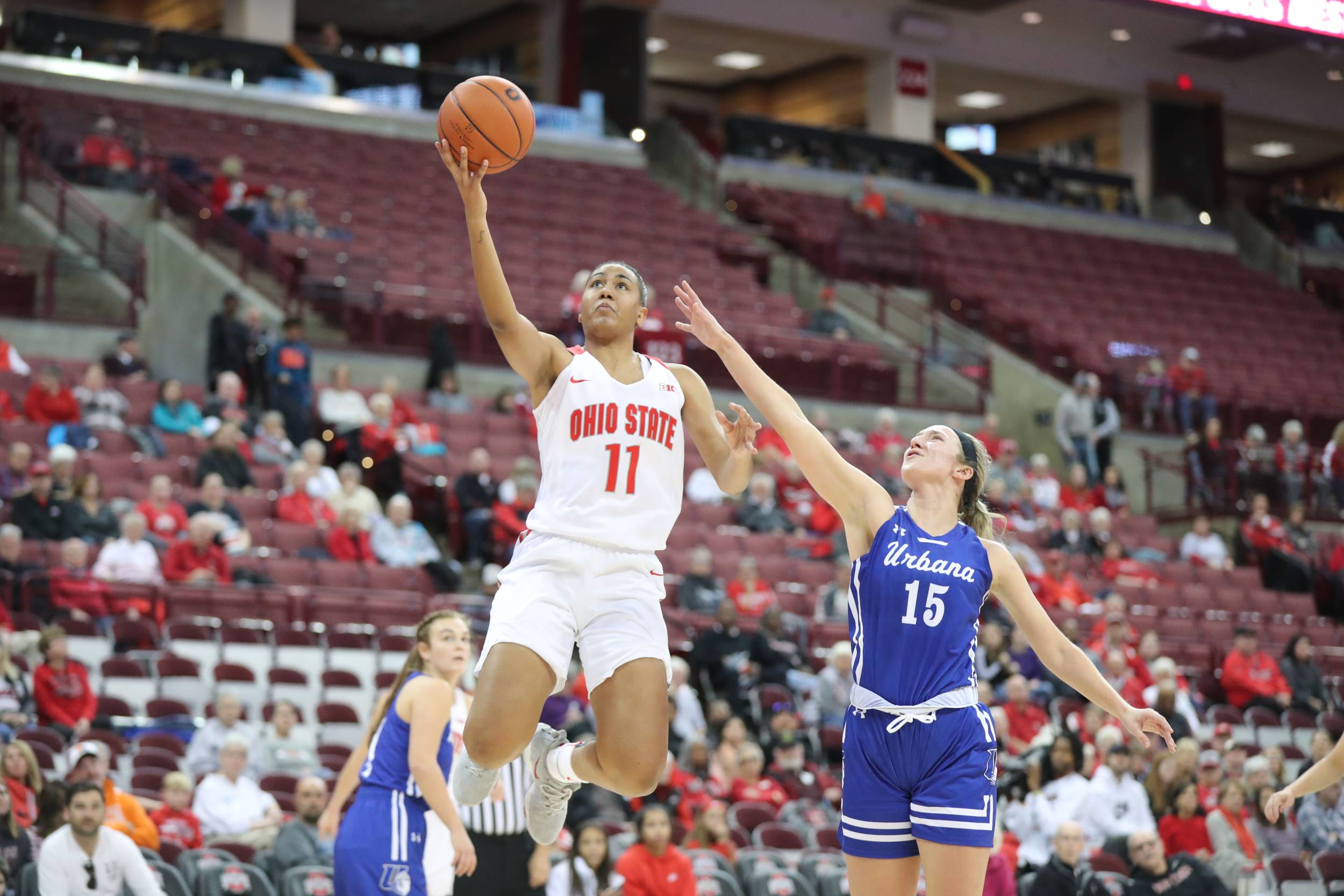 In 2017, Ohio State came into the season a favorite.

The Buckeyes were ranked No. 5 in the preseason AP poll and were the highest ranked team in the Big Ten, while the entire starting lineup was in their final season with the program, including eventual three-time Big Ten Player of the Year Kelsey Mitchell.

In that preseason, the Buckeyes played Urbana and dominated the Blue Knights 135-54 with Mitchell and Stephanie Mavunga leading the way in scoring.

Fast forward two seasons and Ohio State is no longer the favorite. The Buckeyes were not picked to be in the top five of the Big Ten by coaches or the media, and they did not receive even a single vote in the AP poll.

But regardless of the change in expectations, the result remained the same: an 81-point win against Urbana.

On Sunday, in Ohio State’s lone exhibition game before the real season starts, the Buckeyes showed the same dominance that the most talented and experience team the program has had in recent memory did, and they did it with three true freshmen starting.

Ohio State won this exhibition against the Blue Knights 131-50, highlighted by a pair of 25-point performances from freshman guards Jacy Sheldon and Kierstan Bell.

“Getting all our nerves out, that was really fun,” Sheldon said. “Our first time playing a real game was really cool and I think we learned a lot, so we have a lot to build on.”

Sheldon earned her 25 points on 11-of-19 shooting and added eight rebounds and five steals in almost 31 minutes of play, ending with a team-high plus-60.

Bell was slightly more efficient at 10 for 14, and earned four steals in just over 22 minutes.

“We’ve worked hard in the preseason, so just happy to see our kids take some of that stuff we’ve done and put it onto the court today,” Ohio State head coach Kevin McGuff said. “We still have a long, long way to go, but at least I think you could see some of the talent that we have, and we’re very young, so we made a lot of youthful mistakes, but I’m excited about what this team could ultimately end up being.”

The Buckeyes opened the game on a three from Bell on the first possession and never looked back, never losing the lead on their way to shooting 66.3 percent from the field and 42.9 percent from three.

Urbana committed 27 turnovers in the game, which turned into 49 points for Ohio State. For McGuff, he said the team improved in a variety of areas in the past week since the closed scrimmage against Eastern Michigan.

“We shot the ball better, we were more efficient on offense and just executed a little bit better, also rebounded a little bit better,” he said. “I thought we got better from last Sunday to this Sunday, and that’s the key for us. With so many new people, we still have a long way to go, but if we just keep improving, I think we’ll end up in a good place.”

Even after being up 66-25 at halftime and being up 98-36 after three quarters, the Buckeyes never took their foot off the gas, something Sheldon said became a focus as the game grew more and more out of hand.

“We focused a lot on staying focused with our play, our game, rebounding, defense are some things we have to get better on,” she said. “We tried to stay focus on that to stay in the game.”

Ohio State opens its season against Valparaiso a week from this exhibition, and go into it without much in the way of expectations from polls or preseason outlooks.

In 2017 that wasn’t the case, and the Buckeyes somewhat underperformed while striving for those lofty goals. That Ohio State team did go 28-7, but none of it mattered after an upset defeat to Central Michigan that cost the Buckeyes a spot in the Sweet 16.

No one knows what Ohio State is going to do this year, but an 81-point win in an exhibition game shows that the sky could be the limit for a team full of youth and potential.