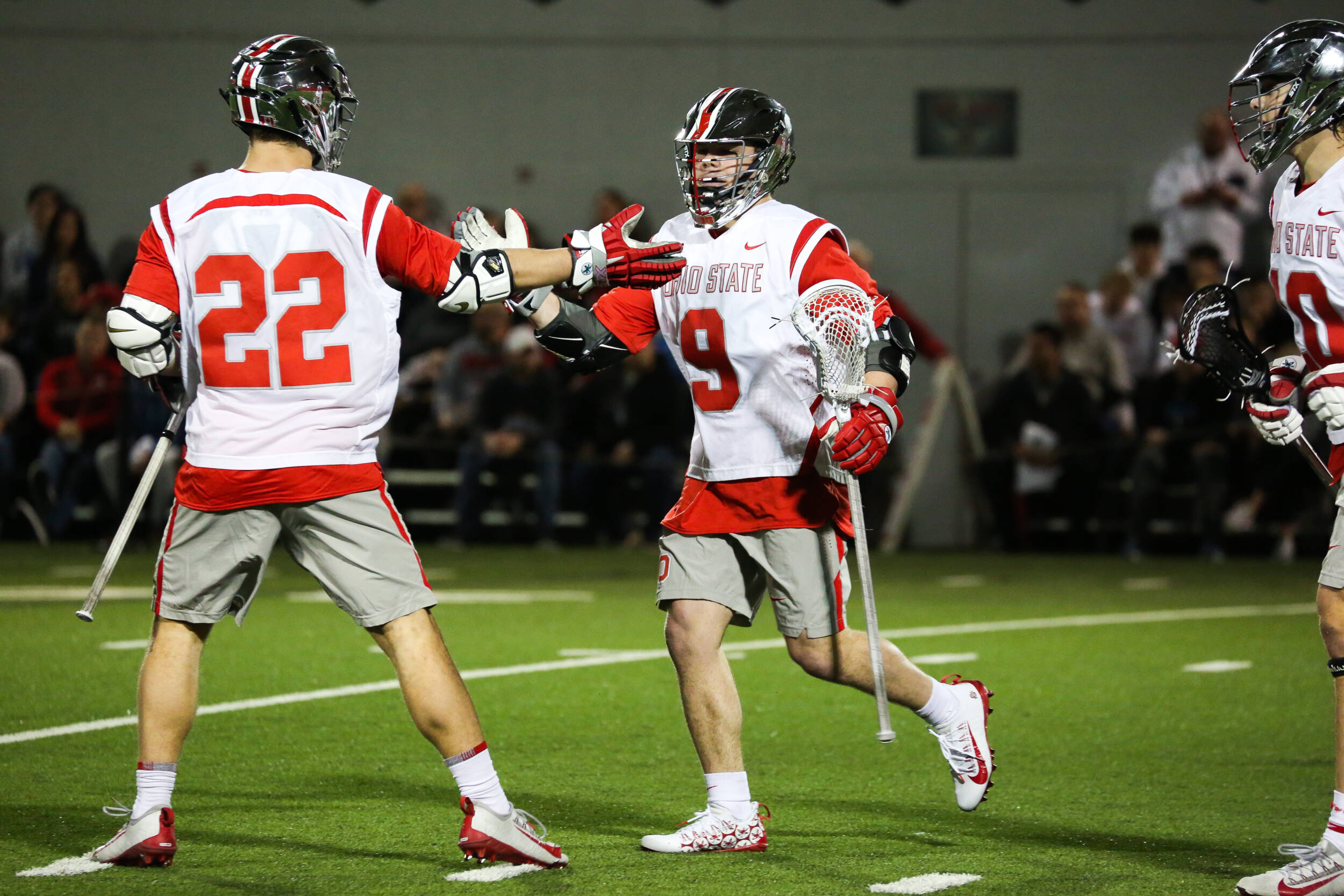 Ohio State saw three more Olympic sports seasons kick off in the past week, along with yet another win over a No. 1 foe for the men’s tennis team. The newest members of the Olympic sports club are men’s lacrosse, women’s lacrosse and women’s softball, which went a combined 7-1 in their eight games during the week. On the whole, Ohio State put up an impressive 12-7 record.

For the second straight week, the men’s tennis team upset the nation’s top team at home. After defeating Texas 4-1 last weekend, the No. 2Buckeyes knocked off USC 4-2 on Feb. 9, just two days after taking down Arizona State, 7-0.

Against the Trojans, Ohio State grabbed the doubles point thanks to a 6-4 win from Kyle Seelig and Cannon Kingsley over Stefan Dostanic and Bradley Frye and a 7-6(5) win for James Trotter and Justin Boulais against Mor Bulis Brandon Hoft.

The Buckeyes will take the courts next on Feb. 11 against Texas A&M, and will do so as the nation’s No. 1 team.

Ohio State’s men’s lacrosse team opened its season with a blowout, 23-9 victory over Detroit Mercy on Feb. 4. Against Detroit Mercy, the No. 13 Buckeyes got just about anything that they wanted offensively, including six goals for star senior Tre Leclaire and four each for Jackson Reid and Jack Myers.

The Buckeyes won again on Feb. 8, taking down Boston University on the road, 11-4. While it wasn’t quite as dominant as 23-9, it was still a resounding win for the Buckeyes, who received an outstanding effort from goal keeper Josh Kirson, who made a career-high 18 saves. Offensively, Leclaire, Reid Ryan Terefenko and Myers all chipped in two goals, with Leclaire and Myers also adding an assist each.

“It felt good to get our first road win,” said head coach Nick Myers. “Josh was outstanding in goal and our defense made the plays we needed them to in front of him. We’re coming home and excited to have a full week to get better as we prepare for UMass.”

The Buckeyes will take on UMass next as Myers noted, on Feb. 15.

The women’s lacrosse team also opened its season with a win, three days later on Feb. 7 over Duquesne, 11-9. It was a great start for new head coach Amy Bokker, who praised her team after the game.

“Our theme is to grow and keep getting better,” Bokker said after the game. “I don’t think we outplayed Duquesne tonight. I do feel as though we outlasted them and that’s a tribute to how hard and competitively we’ve been working at practice.”

“Knowing my teammates and them knowing me really helped,” said Turner. “I knew what they wanted and they knew what looks I wanted. It was amazing how well it worked together. As a team, we had a hard time at the beginning but we were able to come together and pull out strong.”

“Robert Morris is an aggressive team and we definitely lost our discipline a little bit in our play,” said Bokker. “We needed to execute our plays and worry about what we’re doing. I think if we stick to executing what we’ve been practicing we’ll be better overall.”

“I think at the beginning we came out a little slow but we really brought it in and figured out what needed to change,” said Hernandez. “Scoring a few goals in a row, we felt the momentum go up so we continued to push it and pile on the goals.”

Ohio State will next play against Kent State on Feb. 12.

The softball team didn’t open its season as well as both lacrosse groups did, but was able to bounce back, rattling off three wins to end the week after losing the opener to South Carolina, 3-2 on Feb. 7. A Meg Otte inside-the-park-home run served as the highlight for the Buckeyes.

The next day, however, Ohio State secured a 13-5 win over North Dakota State and a 5-0 win over Southern Illinois in the Carolina Classic. Ohio State hit four home runs against NDSU. Ashley Prange went 6-for-9 with a 1.444 slugging percentage, 13 total bases, five RBI, four runs and two home runs on the day.

On day three, Ohio State delivered an excellent game against UNC Greensboro that was capped by a walk-off sacrifice fly in the 10th inning for a 5-4 win. Kaitlyn Coffman and Taylor Pack both had three hits.

Next up, Ohio State will partake in Big Ten/ACC Challenge on Feb. 14-16 and face N.C. State and Notre Dame.

Ohio State celebrated senior night for five wrestlers in a 28-10 win over Northwestern that boosted the Buckeyes to 10-3 on the year and 6-2 in conference play entering the season finale against Penn State on Feb. 15.

Redshirt junior Fritz Schierl made his season debut in duals, filling in for Kaleb Romero admirably and claiming a pin over Ankhaa Enkhmandakh.

Ohio State dropped its first match of the season on Feb. 7 against No. 22 Georgia Tech, 4-1. The Buckeyes couldn’t secure the doubles point, and an upset loss for star No. 8 Shiori Fukuda in singles marked an overall bad day for Ohio State.

“It wasn’t our best day today, but the best thing about getting to this tournament is that you get another two tough matches,” said head coach Melissa Schaub We are a good team and we’ll need to respond well tomorrow after a tough loss like this.”

The Buckeyes bounced back on Feb. 9, taking down No. 10 Michigan, 4-3. Despite losing the doubles point, Ohio State rode singles wins from Fukuda, Danielle Wolf, Isabelle Boulais and Luna Dormet to the match win.

“That was a tough match,” Schaub said. “Everything you would expect in a rivalry match. We had chances at spots, but Michigan doesn’t go away and they are great fighters. It was such an inspiring effort from Luna in her first match back. We have another big one tomorrow so we need to make sure we get ourselves ready.”

Ohio State has a Feb. 16 match with Vanderbilt up next.

In game one, Ohio State had great performances from its stars ( Liz Schepers and Emma Maltais both scored goal and put up two assists each, while Tatum Skaggs tallied two goals and one assist) but couldn’t keep up with Minnesota Duluth’s high-powered attack.

Game two saw Ohio State unable to find the net, with Skaggs notching the lone goal. The two losses drop Ohio State to 17-8-5 on the season entering a weekend series with Wisconsin.

After an 8-1 start to the year, first-year head coach Kevin Burch will now have to face some adversity for the first time during his tenure, as Ohio State dropped both matches in a two-game weekend against a pair of California powers.

The Buckeyes will next host No. 6 Lewis University on Feb. 13.

“I want to say thank you to everyone who came and watched. There are no words to describe how proud I am of our team. We had some obstacles before the competition began during the warm-up but our guys can handle diversity very well.” said Head Coach, Rustam Sharipov, “We had only three misses and twelve sticks. I think the team can still improve and we are going to go back home with two weeks off and continue to push and finish the second half of the season on a good note. Go Bucks!”

The men’s team has a long break before its home finale against Navy on Feb. 29. The women’s team will next host Penn State on Feb. 14.

The Buckeyes combined for 19 top-10 finishes at the Meyo Invitational hosted by Notre Dame, with eight from the men’s team and 11 from the women.

Next, Ohio State will head to Clemson for the the Tiger Paw Invite on Feb. 14.

Ohio State’s men’s team closed Big Ten match play with a 5-1 win over Michigan on Feb. 8. The was the third and final match of the tournament that saw the Buckeyes go 2-1, with the other win coming over Wisconsin, 5-1, the day prior. Nebraska was the lone loss, by way of tiebreaker. Felix Kvarnstrom and Patrick Schmucking both went 3-0 in the tournament.

Meanwhile, the women’s team finished day one ranked 14th of 25 teams at the Northrop Grumman Regional Challenge on Feb. 9. Day two will tee off on Feb. 10, starting at 12:30 p.m. ET.