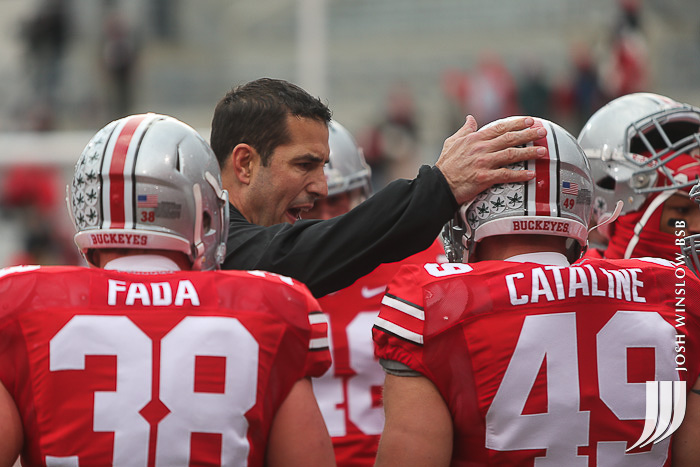 Former Ohio State nose tackle, defensive coordinator and interim head coach Luke Fickell will not be returning to the Big Ten, despite reported mutual interest between the Cincinnati head coach and Michigan State. The Spartans, who are without a head coach following Mark Dantonio’s resignation on Feb. 4, looked to Fickell as a top candidate.

However, Yahoo’s Pete Thamel reported on Feb. 10 that Fickell, who had interviewed with MSU, would be staying put at Cincinnati, where he has been the head coach since 2017. In his three seasons with the Bearcats, Fickell has put together a 26-13 record, including back-to-back 11-win seasons after a 4-8 start to his tenure.

Sources: Luke Fickell has decided to stay at Cincinnati. After interviewing for Michigan State on Sunday and talking it over with his family, he elected to stay put.

Prior to his departure for Cincinnati, Fickell served as a member on Ohio State’s staff under Jim Tressel and Urban Meyer from 2002-2016, though his career at Ohio State actually started as a graduate assistant in 1999 under his head coach during his time as a player at OSU, John Cooper.

During his time as a player at OSU, Fickell was a four-year starter, lining up on the Buckeye defense for a school record 50 consecutive starts until Billy Price broke it in 2017. Fickell signed with the New Orleans Saints as an undrafted free agent in 1997, but an ACL tear ended his NFL career before it ever really got started.

Per the Detroit Free Press, Fickell’s interest in the open Michigan State job was legitimate, but he and his wife Amy had “concerns about campus culture at MSU, including lawsuits roiling the football department.” Those concerns ultimately played a major role in Fickell’s decision to remain at UC.

Among recent scandals at MSU has been a lawsuit filed against Dantonio and the football program by former staffer Curtis Blackwell, who is alleging that Dantonio arranged jobs for the parents of former player Auston Robertson, who signed with Michigan State in 2016. Robertson was accused of sexual assault in April of 2017 and suspended from the team.

Fickell wasn’t the only former Buckeye assistant to receive interest from Michigan State in replacing what was once Tressel’s right-hand man in Columbus. Colorado head coach Mel Tucker, who spent four seasons in Columbus as a defensive backs coach from 2001-2004, turned the Spartans away on Feb. 8.

With Fickell and Tucker out of the equation, MSU interim head coach Mike Tressel – the nephew of Jim – looks to be a potential candidate to run the ship for at least a season. Tressel was a GA at Ohio State under his uncle for two seasons in 2002 and 2003 before heading off to Cincinnati to join Dantonio’s staff.