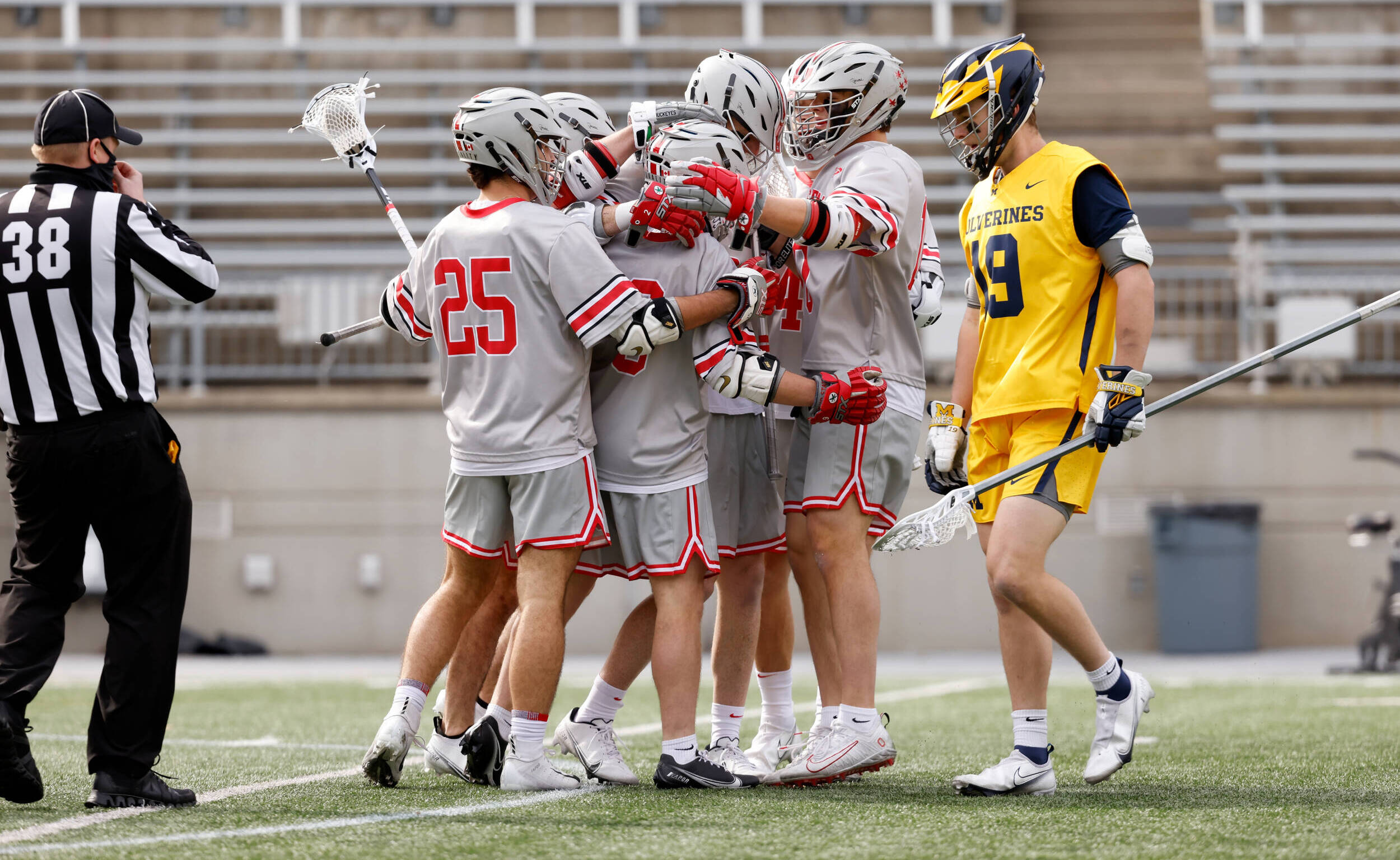 Ohio State secured a bounce back victory and a major program milestone on March 14 in a 13-10 home victory over Michigan. Firstly, the Buckeyes snapped a two-game losing streak and moved back to .500 on the season. They had lost to Rutgers 22-12 and Penn State 15-13 after a season-opening victory over Johns Hopkins prior to this game.

Secondly, this marks Ohio State’s 500th program win. It is the 23rd Division I school to reach that mark.

“I couldn’t be prouder of our men for the way they competed today,” said head coach Nick Myers. “It was a big win for our program not just because it came against our rivals but also because it’s No. 500 in the history of our program. This one is for all those who came before us.”

Jack Myers led the Buckeyes with three goals and an assist, joined in the four point club by Tre Leclaire with two goals and two assists. Johnny Wiseman had three (two goals, one assist) and Griffin Hughes had a pair of goals.

No. 6 Ohio State bested No. 8 Iowa on March 13, running away with a 406.100-395.750 victory. Buckeyes Josh Seltzer, Trevor Cummings, Max Andryushchenko, Andrew Brower and Sean Neighbarger were honored in the senior day festivities.

“I’m really proud of how our seniors competed today,” said head coach Rustam Sharipov. “They led by example and did a great job for us. We made a few improvements since competing last week and had our highest hit percentages of the season. It’s a short break with Michigan next Wednesday but I’m confident we’ll be ready.”

No. 9 Ohio State took a 6-1 victory off of Penn State in State College, Pa., on March 14 to improve to 11-3 on the season. Irina Cantos Siemers, Kolie Allen, Lucia Marzal and Luna Dormet all swept their singles matches, while pairings of Isabelle Boulais/Allen and Marzal/Liza Hofbauer took the doubles point for the Buckeyes. The full scoring is included below, via Ohio State.

It had to happen at some point. After a dream start to the season that saw the Buckeyes jump out to a perfect 12-0 record and a No. 11 spot in the national rankings, head coach Jen Flynn Oldenburg took her first loss as the head coach of the Ohio State women’s volleyball team to No. 4 Nebraska on March 12.

That’s not to say that Ohio State went down easy. The match went all five sets, with Ohio State taking victories in sets one and two before dropping the final three.

Ohio State split its weekend series with Iowa and Nebraska, dropping one and winning one against both teams. The weekend started poorly for the Buckeyes, with a Friday double-header that saw a 4-0 loss to the Hawkeyes and a 10-4 loss to Nebraska.

It was all up hill from there though, with a 7-4 victory over Iowa on Saturday behind a strong performance from transfer pitcher Jack Neely, who fanned seven and allowed just one hit in 4.1 innings.

“We strung some hits together and hit the ball hard in the fifth,” Ohio State coach Greg Beals said. “They gave us a little help in the inning as well and we were able to take advantage of it.

“I like how Jack pitched today,” Beals said. “He goes four-and-a-third innings and he punched out seven guys. He went over 75 pitches. He gave us four really good innings and we went to the bullpen early because of yesterday [two losses].”

Offensively, Mitchell Okuley kept the good times rolling after a pair of home runs on Friday with a double and three runs batted in against Iowa.

“Okuley doesn’t say a whole lot but he really competes,” Beals said. “I like the athlete that he is.”

Ohio State finished the weekend with a 6-4 against Nebraska, again buoyed by strong pitching. Will Pfennig went 6.2 innings, allowing two runs on five hits with six strikeouts and no walks. Kade Kern and Sam Wilson knocked out two-run home runs to lead the Buckeye offense.

Ohio State played back-to-back series’ over the last week, taking a 2-1 series win against Wisconsin to open the week before dropping its second series 1-2 against Northwestern over the weekend.

The Buckeyes opened their six-game week with a marathon, going 15 innings against the Badgers in game one to set a school record on the way to a 7-5 victory. Wisconsin took the second half of that double-header, but Ohio State claimed game three 3-2 behind some fantastic Allison Smith pitching. Smith allowed just one hit in five innings of action, striking out three and earning her third win of the year.

The Buckeyes split their second double-header of the week, this time in the opening games against Northwestern. With Smith again on the mound in game one, Ohio State floated to a 4-2 victory. The freshman pitcher was the only winner on the mound for the Buckeyes, pitching in all three wins. She struck out seven over seven innings.

Northwestern took game two 9-0, and snapped Smith’s winning streak with a 3-2 victory on Sunday. Despite the loss, Ohio State’s standout pitcher still allowed just four runs, fanned six batters and didn’t allowed an earned run, pitching a complete game in the process. For those of you keeping track at home, that’s a 3-1 record, 1.44 earned run average and 24 strikeouts over 24.1 innings last week for Smith. True freshman.

A 65th minute goal that gave Ohio State a 2-1 lead wasn’t enough to lead the Buckeyes to victory, but a Penn State equalizer two minutes later was all that the Nittany Lions could muster on the way to a 2-2 draw on March 13.

Kayla Fischer scored twice for the Buckeyes, thanks to a pair of nice passes from Marissa Birzon. OSU now sits at 2-1-2 on the season entering matchups with Purdue on Thursday, March 18 and at Illinois on Sunday, March 21.

Ohio State swept Michigan State for the third time this season on March 12 with a 7-0 victory in East Lansing, but couldn’t continue that momentum against Michigan on March 14, dropping its second match and first in Big Ten play, 4-3.

Full scoring is included below.

Led by shot put champion Adelaide Aquilla, Ohio State led the Big Ten at the NCAA Championships, finishing in 11th place in the team scoring and sending seven athletes to the All-American list. Aquilla, Anavia Battle and Allie Guagenti were named first-team All-Americans. Battle took fifth at the 200m with a 22.76 time, while Guagenti finished fifth in the mile at 4:36:71.

Triple jumper Clarence Foote-Talley finished ninth with a 16.18m effort to earn his way onto the second-team, along with the three members of the 14th-place 4×400 relay team: Donnie James, Jr., Frank Hayes and Cameron Cooper.

Ohio State finished in a tie for fifth at 4-under par at the Spartan Invitational. Freshman Maxwell Moldovan with his second top 10 finish in as many collegiate events, shooting 4-under par and tying for sixth. Elis Svard shot even and tied for 21st, while Felix Kvarnstrom shot 1-over par and tied for 23rd.

Ohio State will take the court next for two matches at Purdue Fort Wayne.