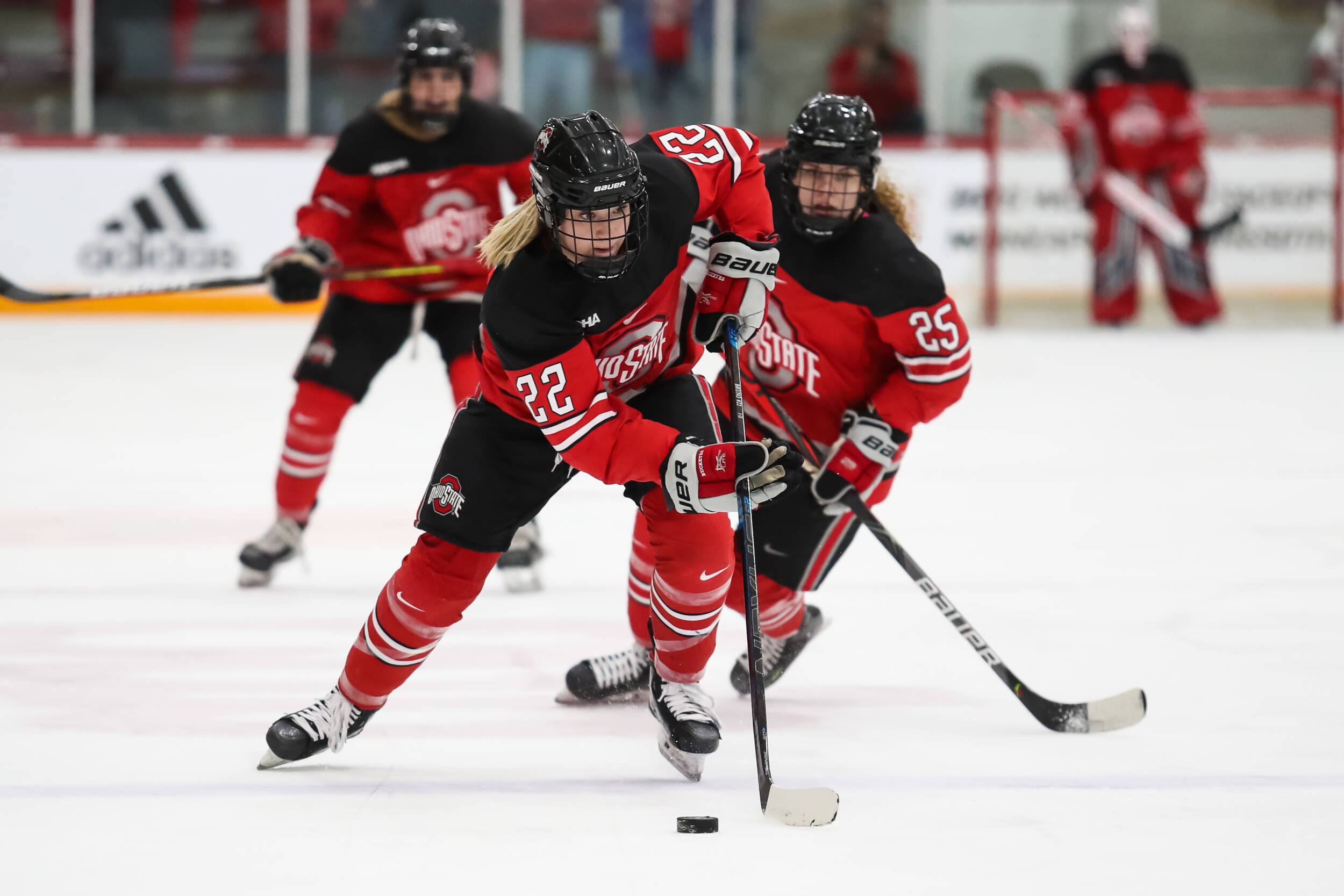 It was a massive week for Ohio State Olympic teams, with quite a few winter teams competing in conference title events, while the spring teams entered further into their seasons. Leading the way is the women’s hockey team, which secured a WCHA title for the first time in school history.

It took two visits to overtime over a two-game weekend, but Ohio State won its first WCHA title on March 8, toppling Wisconsin 1-0 in the title game to secure the hardware.

Ohio State’s most impressive win of the weekend may have actually come a day prior, when the Buckeyes won in a brutal battle with Minnesota, again in overtime, 4-3. In the first game, the Buckeyes clawed back from 2-0 down in second period and rode two Jenn Gardiner to a sudden death overtime period. There, star attacker Tatum Skaggs delivered the Buckeyes to the final with a deflection just in front of the net off of a Liz Schepers shot.

“It’s hard enough to play the No. 3 team in the country in their rink, and to be down 2-0 when we were on our heels the first period, but we just challenged the girls,” said head coach Nadine Muzerall. “It’s about character and grit and being unified, and they found a way. It was all heart and I’m just so proud of them.”

“We just renewed our mindset after being down 2-0,” said Skaggs. “We just said let’s go out there and take it to them and do what we’ve been practicing these past six months. We know that when we stick together, things happen. I think that someone needed to ignite that fire, and our entire team did it together.”

Against the Badgers, Skaggs was again the overtime hero, finding the back of the net off of a tremendous Jincy Dunne pass. The true star for the Buckeyes was goaltender Andrea Braendli, who had 40 regulation saves and kept the Buckeyes in the game despite a 17 shot difference in favor of Wisconsin. Still, that Skaggs goal was pretty slick.

The Buckeyes will take on Minnesota again in the first round of the NCAA tournament on March 14.

Pletcher’s title came against a very familiar foe: Penn State’s Nick Lee, who beat the Buckeye just a few weeks ago to break up his perfect season and force him into the second seed at the Big Ten Championships. Pletcher topped the top-seeded Lee with a 6-5 decision to claim his first Big Ten Title. Moore’s win came over Nebraska’s Eric Schultz, by way of a 4-1 decision. Moore has been in a league of his own at 197 this season, and showed it off at the tournament, claiming his third Big Ten Title.

Sasso’s loss to Iowa’s Pat Lugo was a heartbreaker for the Buckeyes, as he fell just 2-1. Sasso nearly landed a last second takedown that would have given him the way, but a lengthy review showed otherwise, as Lugo avenged his February loss to Sasso to win the Big Ten Title.

Perhaps more important than anything else from the weekend are NCAA bids, of which Ohio State received eight. Heinselman, Pletcher, Sasso, Smith, Romero, Jordan, Moore and heavyweight Gary Traub will all be competing in Minneapolis.

Ohio State’s women’s team continued its dominance with a 5-2 win over Northwestern to move to 9-3 on the season. The Buckeyes rode singles wins from Kolie Allen, Danielle Wolf, Luna Dormet, Irina Cantos Siemers and Shiori Fukuda to make up for a lost doubles point.

“We are really happy with the win today,” said head coach Melissa Schaub. “Northwestern is a tough team and they have had our number for the last couple of years. We played strong in singles and I thought we played really tough when we needed to. I’m happy with our group today and now we will look to Michigan State on Friday night.”

The women’s team will face off with Michigan State next on March 13.

Meanwhile, the men’s team stumbled in a 4-3 loss at Stanford, but quickly bounced back with a Big Ten opening win over Penn State, 6-1, to move to 14-3 on the year. Against the Cardinal, the Buckeyes took the doubles point, but came up just short in singles, with John McNally falling to Axel Geller on court one, 5-7, 1-6 in what ended up being the turning point in the match.

In the bounceback match, the Buckeyes were never truly tested, and rolled over Penn State while losing just one point. They’ll take on Michigan State on March 15.

Both lacrosse teams claimed close victories this weekend, with the first coming from the men’s team on March 7. They downed Hofstra in front of a strong home crowd, 12-10. It was a career day for Josh Kirson, whose 19 saves tied him with Mike Rimmer and Stefan Schroder for the most in a game since 2005 for the Buckeyes. Tre Leclaire and Johnny Wiseman each had two goals.

“Another battle today,” said head coach Nick Myers. “Josh was outstanding in goal and offensively we were well-balanced. Getting a couple transition goals in the second half was big. We will quickly regroup and get ready for our game at home Tuesday vs. Notre Dame.”

The Buckeyes will play on the Big Ten Network at 5 p.m. against Notre Dame on March 10.

The women’s team defeated Marquette 16-14 to move to 5-3 on the season. Liza Hernandez and Nicole Ferrara starred, scoring four goals each. The Buckeyes will take on Towson next, also on March 10.

It was a much needed good weekend for the softball team, who went 2-2 at the Arizona State invitational. Game one saw the Buckeyes blank Oregon State, 3-0. Andi Farrah drilled a home run in the first inning, and Payton Buresch went all seven innings, surrendering just three hits and striking out three for her second shutout of the year.

Game two was a rout, in favor of the Buckeyes. They crushed Wright State, 13-0, and forced a fifth inning run rule. It was a season-high in hits (16), runs scored (13) and RBI (12) for Ohio State, and an excellent first win for Skylar Hayward, who allowed just two hits and struck out six.

Both losses of the weekend came on Sunday, with a 7-3 loss to Oregon State, followed by a 9-0, five inning defeat against Arizona State. The losses dropped the Buckeyes to 8-9 on the season. They’ll finish the tournament against Lehigh on Mar 9.

“We attacked the ballgame today,” Greg Beals, Ohio State head coach, said. “We had the mindset of going out and taking care of business. We didn’t play very well last night and the guys responded really well today. Our team needed a ballgame like that to get some confidence so we can get things going.”

“Griffan (Smith) had another really solid start where he was able to hit his pitch count while commanding the game,” Beals said. “We did what we needed to do offensively. The bullpen needs to be cleaner because we helped them out quite a bit. I liked how we were able to bounce right back after they tied it up. We showed some resolve, taking a bunch from them and throwing the next punch.”

The Buckeyes have North Florida up next on March 10 and 11.

Ohio State had two gold medalists and 19 top 10 finishers at the NCAA Midwest Regional Championships. Henry Lange and Roscoe Swartz were the gold medal finishers, Large in epee and Swartz in saber. The Buckeyes also had three second place finishes, from Julieta Toledo in saber, Alexanne Verret in epee and Camilla Rivano in foil.

NCAA Championship qualifiers will be announced on March 10.

“I think the team did a good job from the beginning until the end. We had some uncharacteristic mistakes on PH, SR, and PB. Overall I am happy where we are right now.” said Head Coach, Rustam Sharipov, “We have a short week to fix the little mistakes and hit the road to Minnesota as we take on the Gophers and Cornhuskers. I’m very proud of this group of kids and honored to coach them each and every day. Thanks for your support and Go Bucks!”

Up next, the Buckeyes have a March 13 tri-meet with Minnesota and Nebraska.

The women’s team didn’t quite win their tri-meet against Arizona and Bridgeport, but it was still a strong second-place showing for the Buckeyes. Arizona won with a score of 196.350, followed by Ohio State with 195.700, while Bridgeport was third with a 193.250.

These Buckeyes will take on Pitt on March 14 in their home finale.

The Buckeyes shot 29-over and finished 10th at the Colleton River Collegiate of 15 teams. Felix Kvarnstrom finished even at par and placed at 15th of all competitors.

Ohio State’s break is nonexistent, with the Challenge at Concession up next on March 9 and 10.