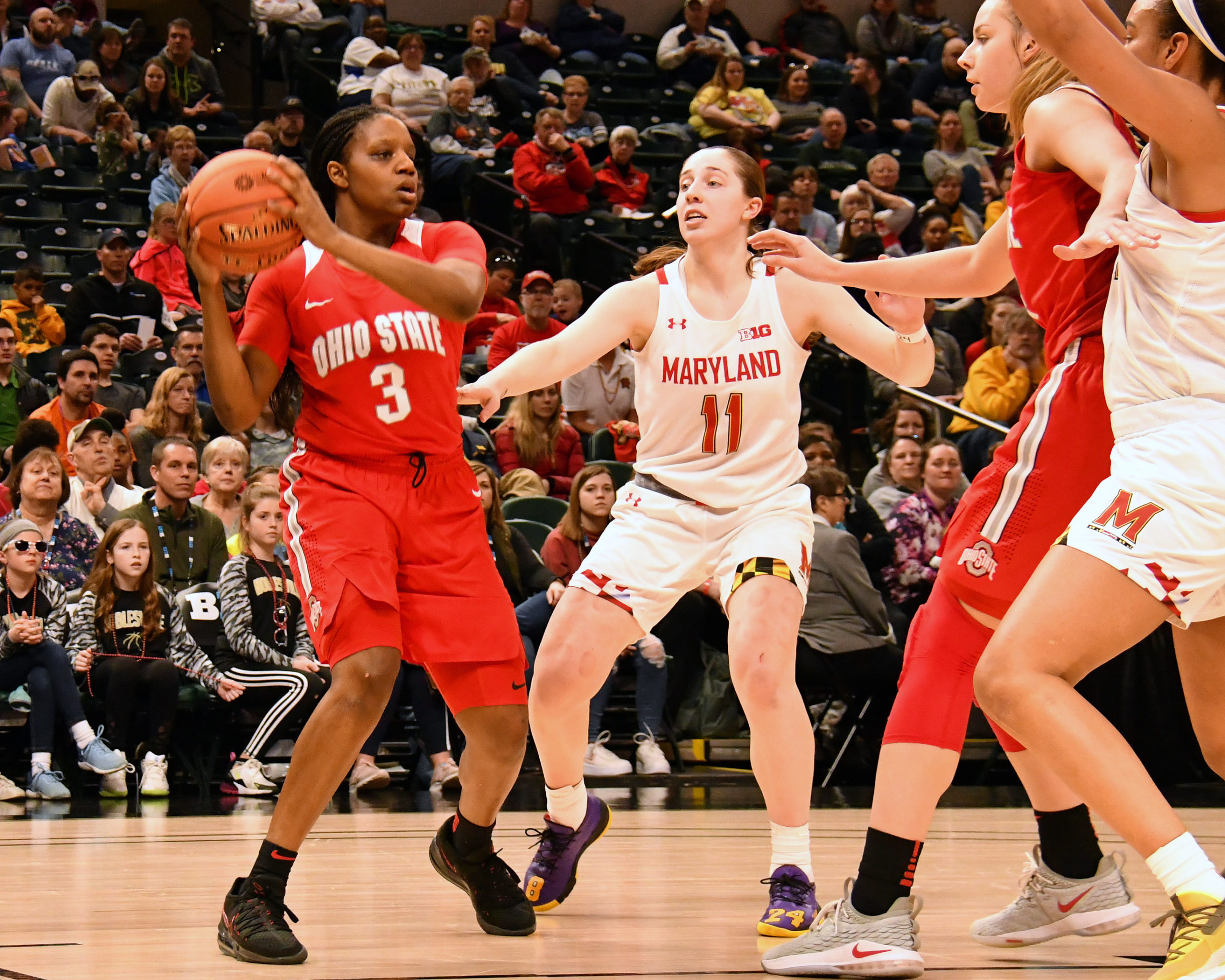 Ohio State went into the Big Ten tournament final looking to win its four straight game in as many days against a Maryland team that has the No. 2 scoring defense, No. 1 rebounding total and No. 1 most forced turnovers in the Big Ten.

No team in the history of the Big Ten tournament has won four games on its way to a championship, and Ohio State tried to do it with eight players in the rotation, and it was part of the reason for an 82-65 defeat to No. 1 seed Maryland.

“They didn’t look like they played two games before,” sophomore forward Dorka Juhasz said. “Obviously we felt that this was our fourth game, so we kind of ran out of gas, I believe. But we have to give them credit because they’re an amazing team, and obviously they’re the No. 1 seed in the tournament for a reason.”

When fatigue was less of a factor, Ohio State stuck with the Terrapins, holding onto a 22-20 lead after one quarter of play. The Buckeyes shot 8 of 16 in that quarter and forced six Maryland turnovers.

But, with a mixture of Maryland’s stifling defense and Ohio State’s growing lack of energy, the tides began to turn.

The Terrapins outscored the Buckeyes 62-43 in the final 30 minutes of the game, and held their opponent to 17 of 50 (34.0 percent) shooting while only committing seven more turnovers the rest of the way.

“Definitely,” Juhasz said on if fatigue was a factor, “but also obviously just fighting and rebounding, and I think we didn’t get those loose balls that they got, and they were more aggressive, so that led them to easy baskets in transition.”

Maryland outscored Ohio State 18-4 on fast break points, a margin that almost completely makes up the 17-point margin of the game.

The rest of that margin could be made up at the free throw line, where Maryland hit 12 of 14 free throws compared to 5 of 6 by the Buckeyes. Even though both teams had 11 total fouls, the Terrapins found theirs by driving to the hole and drawing shooting fouls.

All six of the shots from the charity stripe for Ohio State were by freshman guard Madison Greene.

Sophomore forward Aaliyah Patty agreed with Juhasz that the grueling slate and extended minutes played a factor in the final result.

“I mean, for sure. Playing four games in a row is really tough. Your legs get dead,” Patty said. “But hey, you’ve just got to fight through it, and we didn’t do a good job of doing that.”

Ohio State may have not made conference history, but it still made an impressive run that not many saw coming.

And with this run to the finals comes added experience for a young team that now prepares for the rest of what March brings.

“Now we kind of have a feeling of like how it’s going to go in the future,” Juhasz sad. “You’ve got to be tough for four games, if it’s four games. If it’s five, three, you’ve just got to be tough.

But for now, after four straight games and with Selection Monday still eight days away, this Ohio State team that has overachieved what was expected can now finally take a breather.

“We’ll get some rest but then get back to practice and keep getting better,” head coach Kevin McGuff said. “Once we get a draw, we’ll get prepared for the opportunity that lies ahead.”