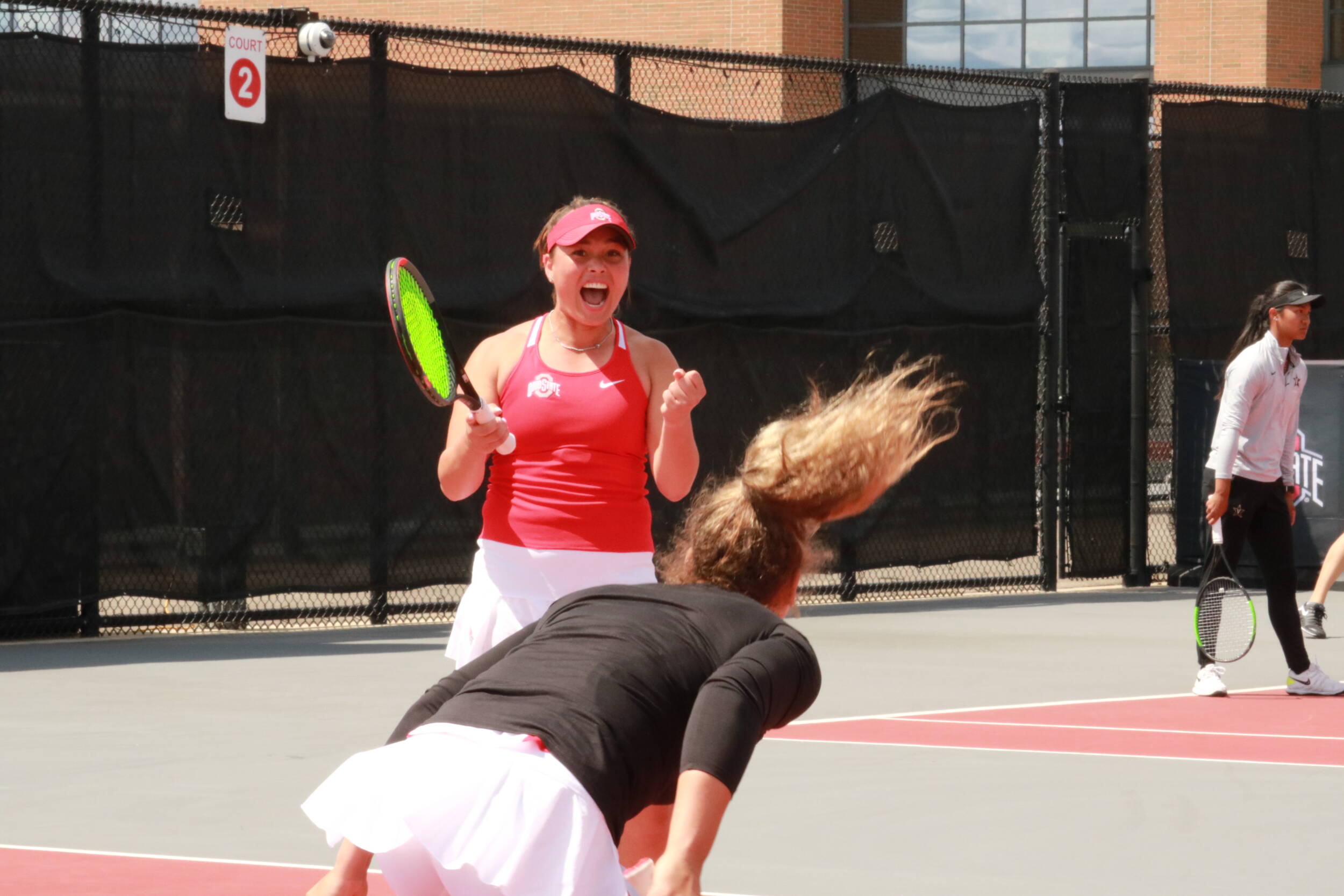 The women’s tennis team, seeded at No. 15 in the NCAA tournament after a dominant Big Ten title run in the conference tournament, won its first two national games to advance to the round of 16.

The Buckeyes opened postseason play with a 4-0 sweep of UIC, claiming the doubles point and then sweeping a trio of singles matches to dispatch of the first round foe. Lucia Marzal, Irina Cantos Siemers and Madeline Atway won in singles, with the former two and Lisa Hofbauer and Luna Dormet won in doubles.

The Buckeyes toppled No. 28 Vanderbilt in their second round matchup to advance to the round of 16, where they will square off with the No. 2 seed Texas in Orlando, at 1 p.m. on May 16.

Ohio State won without the doubles points for one of the first times this season, clawing back from a 1-0 deficit thanks to singles wins from Hofbauer, Dormet, Isabelle Boulais and Marzal, who closed out the win for the Buckeyes.

“A year ago when everything was cut short you’re thinking about how the next season is going to go,” head coach Melissa Schaub said. “We have put a lot of work in this season and for us to get to the Round of 16 – it’s a happy locker room for sure.

“Losing the doubles point was tough. We’ve had the 1-0 lead in most matches this year. After doubles we talked about how now we get a chance to see what we’re made of. We came out and fought hard at every spot and gave ourselves a chance.

“For Lucia to have to play nearly her whole third set as the only court left with the match on the line showed a lot of guts. She played tough and I’m really happy for her.”

The unseeded men’s team knocked off VCU in the opening round of its tournament 4-1, thanks to a doubles point win and singles victories for John McNally, J.J. Tracy and James Trotter.

“Obviously coming into this tournament, not hosting and being ranked where we are, this is an opportunity to prove ourselves,” said McNally. “At the end of the day, if we win our matches, we have a chance to get to Orlando and that’s been the goal all season.”

“Today was a tough match. VCU is an older team and they had a lot of guys who were out there fighting and scrapping. They weren’t intimidated at all. It was a close doubles point. We had a few things go our way and we were able to pull it out. They took advantage of a couple of breaks early in singles and had us on our heels a little. But we stayed with it and are moving on.”

The second match of the tournament saw the Buckeyes upend the No. 10-seeded Wake Forest Demon Deacons, 4-1, capped by a singles victory for sixth-year senior Kyle Seelig.

“We came out with a lot of energy today, the best we’ve had all year, and took the doubles point to get momentum early,” Seelig said. “I think we then took five first sets and we knew they were going to battle back but it was good to close it out before they got anything going.

“For me, I was glad I could finish my match and help the team advance. I was the last match on in the Big Ten finals and I didn’t get it done. I let the guys down and I didn’t want to do that again. I had a couple of chances with deuce points in the second set and I didn’t play the first one well. But I attacked a little more on the second one and that was the winning point.”

Trotter, Tracy and the doubles point contributed for Ohio State as well. The Buckeyes have No. 7 TCU on deck next, in Fort Worth, on May 15.

Ohio State took a 3-1 series victory over Illinois over the weekend, sweeping the first of two doubleheaders and splitting the second to improve to 21-18 on the year with just four games left in the regular season.

The Buckeyes dominated day one, claiming a 12-0 win in five innings in the opening game and following that with a 5-1 victory shortly after. The former was bolstered by an 11-run fourth inning, the most runs in an inning by a Big Ten team this season, led by a two-run home run from Sam Hackenbracht.

Four runs in the second inning of game two helped to lock that one up as well, with some help from freshman pitcher Allison Smith, who had nine strikeouts and grabbed her 10th win of the season.

Illinois claimed game three to open day two, 7-2, teeing off on the Buckeyes in the fourth inning for four runs and never looking back. The Fighting Illini nearly took game four as well, carrying a 1-0 lead into Ohio State’s final out before Carley Gaskill singled and Addy Jarvis went yard to give the Buckeyes a 2-1 lead. Smith, despite some trouble late, locked the game down to secure the victory.