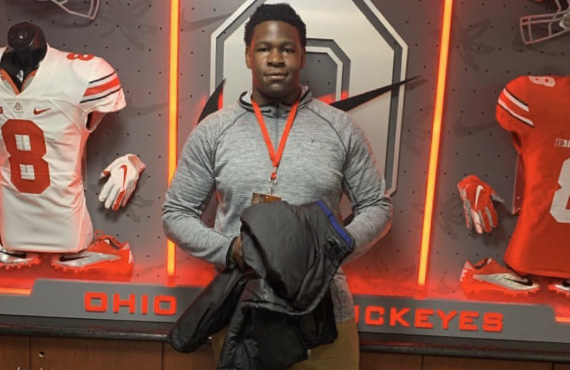 West Chester (Ohio) Lakota West four-star 2022 offensive tackle commit Tegra Tshabola has no plans to visit the University of Kentucky this summer or any time soon, despite online rumors that indicated otherwise. The Buckeye commit shut down the rumors on Monday with a pair of Tweets, first stating that he has no plans to take a trip out to Lexington and then declaring himself 100 percent committed to Ohio State.

Tshabola, ranked as the nation’s No. 183 player, the No. 20 offensive tackle and the No. 7 player in Ohio was rumored to be eyeing Kentucky after it secured a pledge from another Buckeye tackle target in Charlestown, Ind., product Kiyaunta Goodwin last month, but it appears that those rumblings were false.

It’s been a big week for Tshabola, the high school teammate of fellow Buckeye commit cornerback Jyaire Brown, who has also been the subject of potential flip rumors that have not yet yielded any real movement on that front. Tshabola accepted an invite to play in the annual All-American bowl on May 6. He was also invited to the Rivals Five-Star camp series after a strong showing at a regional in Indiana on May 9.

The only visit currently on the docket for Tshabola is an official trip to Ohio State, set for June 4.