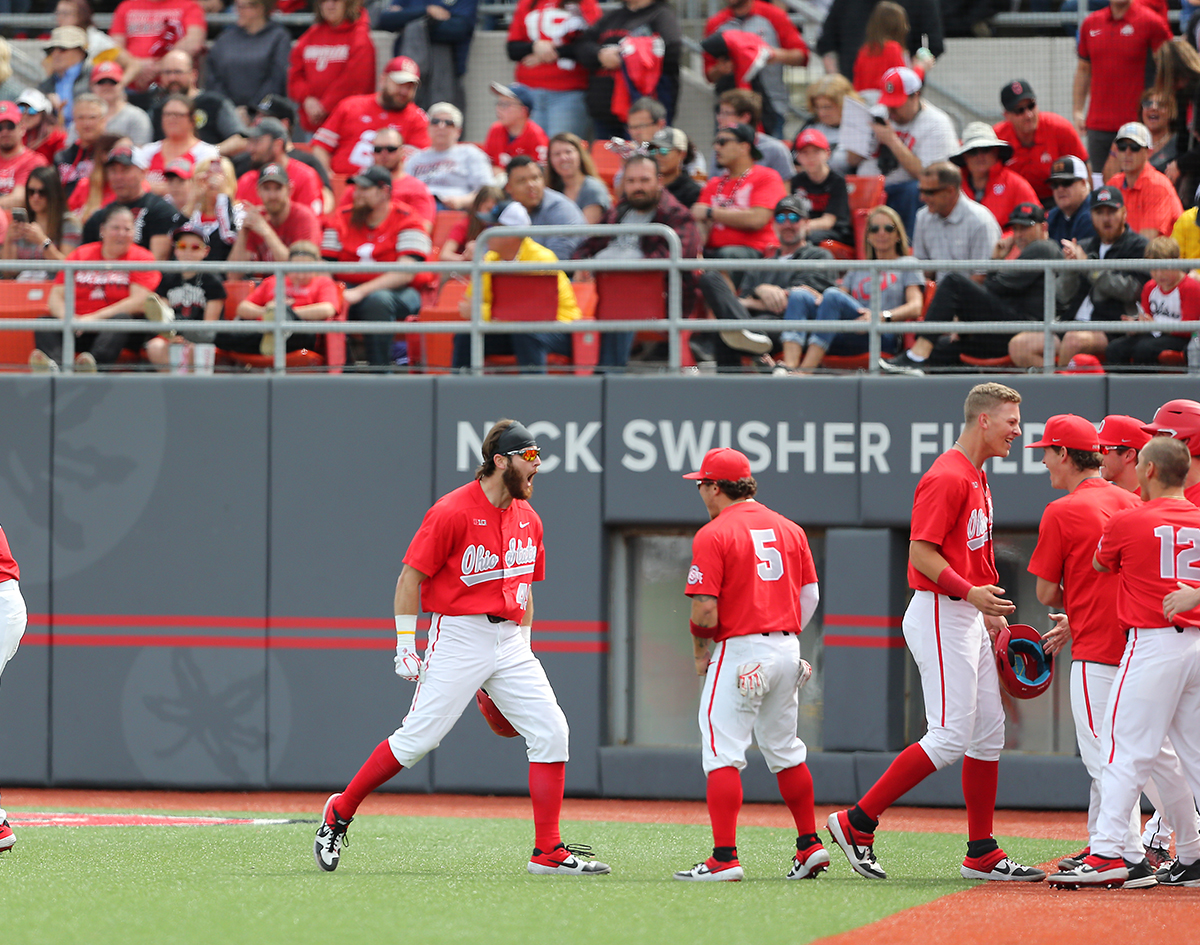 Ohio State’s Olympic-sport student-athletes excelled in the second week of April, with a few programs taking down Big Ten powers. The Ohio State baseball team went 4-1 on the week, including two wins in a series victory against archrival Michigan, who features the toughest pitching staff in the Big Ten. And the Ohio State men’s lacrosse team defeated John Hopkins at Homewood Field, marking the program’s first victory on that turf. What follows are recaps of the past week’s events for Ohio State’s Olympic-sport student-athletes, including links to the press releases.

The Ohio State baseball team cam back from behind to defeat Ohio, 10-8, at Bob Wren Stadium on April 9.

Trailing by one run in the top of the ninth inning, junior first baseman Conner Pohl tied the game with a two-out RBI single. Then, sophomore catcher and captain Dillon Dingler roped a two-run double, giving the Buckeyes the lead.

Junior left-handed reliever Andrew Magno shut down the Bobcats in the bottom half, improving to 2-3 on the season. Redshirt sophomore designated hitter Brent Todys put together a three-hit game performance with a home run and four RBI, while Dingler went 2 for 4 with one double and two RBI. Freshman outfielder Nolan Clegg also had a multi-hit game with one homer, one double and two RBI.

“The story of tonight is the belief factor,” Ohio State head coach Greg Beals said. “This ball club needed a belief-factor ball game. Three runs in the eighth with two outs and three runs in the ninth with two outs. All with big hits. A two-strike, three-run homer by Brent Todys in the eighth, a two-strike base-hit out of Conner Pohl in the ninth and a smoke double by Dillon Dingler.

“Offensively, we powered some hard hit balls late in the game and that’s what we’ve been working on, staying offensive. We competed at the end. I’m really hoping a comeback victory tonight is really going to grow that belief factor.”

The Scarlet and Gray defeated Dayton, 4-2, at Nick Swisher Field at Bill Davis Stadium on April 11.

Junior right-handed pitcher Jake Vance earned the win, tossing four scoreless innings of relief and improving to 3-2 on the year.

Magno picked up his fifth save of the season.

“We’ve been trying a lot of things with the pitching staff and putting Milheim in the start was something he’s done his whole life,” Beals said. “He pitched his team to state championship team last year as a starter. Today was probably his best outing of the year for us. Jake Vance also had his best performance of the year for us. He pitched with intensity and attacked the zone. Magno shuts it down at the end. I wish we didn’t have to use our closer, but we needed to continue the winning ways heading into a big weekend with that team up north coming to our place on Friday night.”

Ohio State hitters tallied 13 hits against the top pitching staff in the Big Ten. Freshman right-handed starting pitcher Garrett Burhenn excelled on the hill, striking out a season-high seven batters across 6.2 innings to improve to 5-1 on the season.

Canzone led the way for the Buckeyes at the dish, going 4 for 5 with one homer, one triple and three runs scored. Kobie Foppe’s bat came alive, going 2 for 4 with one double and two RBI.

Pohl put together a two-hit game with two RBI and freshman shortstop Zach Dezenzo also tallied two hits. Todys was a difference maker in the rivalry matchup, launching a three-run homer in the fifth inning.

“I liked a lot of things that we did tonight,” Beals said. “That’s the ball club I’ve been fighting for and I think the rivalry and the intensity was there. The guys were flat out ready to compete. They didn’t worry about themselves and focused on just making a difference. We did a lot of little things to win a ball game from bunts to two-out hits.

“Ridge Winand with a big time catch against the wall out there was big. Garrett Burhenn in his first rivalry game gets the ball and he was up for the challenge. It was a great outing. He set the tempo for us. We can’t leave out Dom Canzone. Your big time players have to step up in big time games and Dominic Canzone did that tonight.”

Ohio State knocked off No. 24 Michigan again in game one of a doubleheader, 10-4, at Bill Davis Stadium on April 13.

Dezenzo also homered and Pohl and senior left fielder Brady Cherry both had multi-hit efforts, while driving in one run apiece.

Redshirt freshman left-handed starting pitcher Seth Lonsway improved to 5-3 on the year, lasting 5.2 innings. Freshman right-handed pitcher Will Pfennig struck out six Wolverines in 3.1 innings of relief to earn the save.

The Buckeyes dropped the series finale to Wolverines, 6-2, in game two of the doubleheader on April 13.

Canzone and Winand led the Scarlet and Gray at the plate, both turning in 2 for 4 outings.

“We’re disappointed we didn’t win game three,” Beals said. “I thought we played really clean and really tough those first two games and we weren’t clean there in game three. We had some unearned runs and if we can eliminate those unearned runs, it would keep the game tighter and give us some more offensive options, but that wasn’t the case.

“At the end of the day, we won the series and we won the rivalry. The thing for me and the thing for our ball club to take away is how we went about it and the energy and focus we had. Our guys were locked in. They’re exhausted right now. Starting with the come from behind victory on the road and into this weekend, hopefully we learned a lot about ourselves and there’s a lot to build on.”

The No. 2 Buckeyes broke the tie atop the Big Ten standings with a 4-2 victory against No. 14 Illinois in Champaign, Ill., on April 14.  Ohio State improved to 24-2 on the season and 9-0 in the conference with the victory. Illinois fell for the first time in conference play and is 8-1 in the Big Ten and 14-7 overall.

The No. 21 Ohio State women’s tennis team rallied from behind after dropping the doubles point to defeat Purdue, 4-2, at the Varsity Tennis Courts on April 12.

After the Boilermakers won the double point, Luna Dormet and Shiori Fukuda both won in singles to put Ohio State ahead. However, Purdue answered with a win on court one, tying the match at 2 apiece. Mary Beth Hurley and Kolie Allen answered the call for the Scarlet and Gray, closing out straight-set wins to clinch the team victory.

The No. 21 Buckeyes concluded its regular season home schedule with a 6-1 victory against Indiana in the Varsity Tennis Center on April 14.

No. 8 Ohio State earned its first conference victory of the season in thrilling fashion against No. 15 John Hopkins, overcoming a six-goal deficit and scoring in the final minute to win, 14-13, at Homewood Field on April 14.

“Hats off to Coach Pietramala and a great Hopkins team,” Ohio State head coach Mick Myers said. “I loved the way our men responded in the second half to being challenged. We got a lot of contributions from a lot of different people and that’s what it takes to win big games on the road.

“A special thanks to all the Buckeye alumni, family and friends who made it out. We’re looking forward to getting home and playing in front of Buckeye Nation next Saturday.”

The Ohio State softball team split a doubleheader at Penn State on April 9. The Buckeyes dropped the opener, 6-4, before bouncing back in the nightcap with a 12-1 five-inning win.

The Scarlet and Gray lost 10-3 to No. 21 Michigan in the series opener at Buckeye Field on April 12.

The Buckeyes split their doubleheader against No. 21 Michigan at Buckeye Field on April 13. Ohio State fell, 6-2, in the first game, but rallied back to defeat the Wolverines, 2-1, with a walk-off victory in the eighth inning, snapping Michigan’s 17-game winning streak. Ohio State improved to 25-14 overall and 9-5 in the Big Ten with the win, while handing Michigan (29-11, 11-1 Big Ten) its first conference loss of the season.

Ohio State freshman Lauren Peter posted the best finish of her collegiate career, tying for sixth place at 4-over par after an even-par 72 in the final round.

The Ohio State women’s rowing team won seven races in its first home regatta of the season on April 13.

The Buckeyes raced Michigan in the morning session and Michigan State in the afternoon of the Big Ten Double Dual at Griggs Reservoir. The Scarlet and Gray finished the day undefeated against the Spartans and 2-4 in races against the Wolverines.