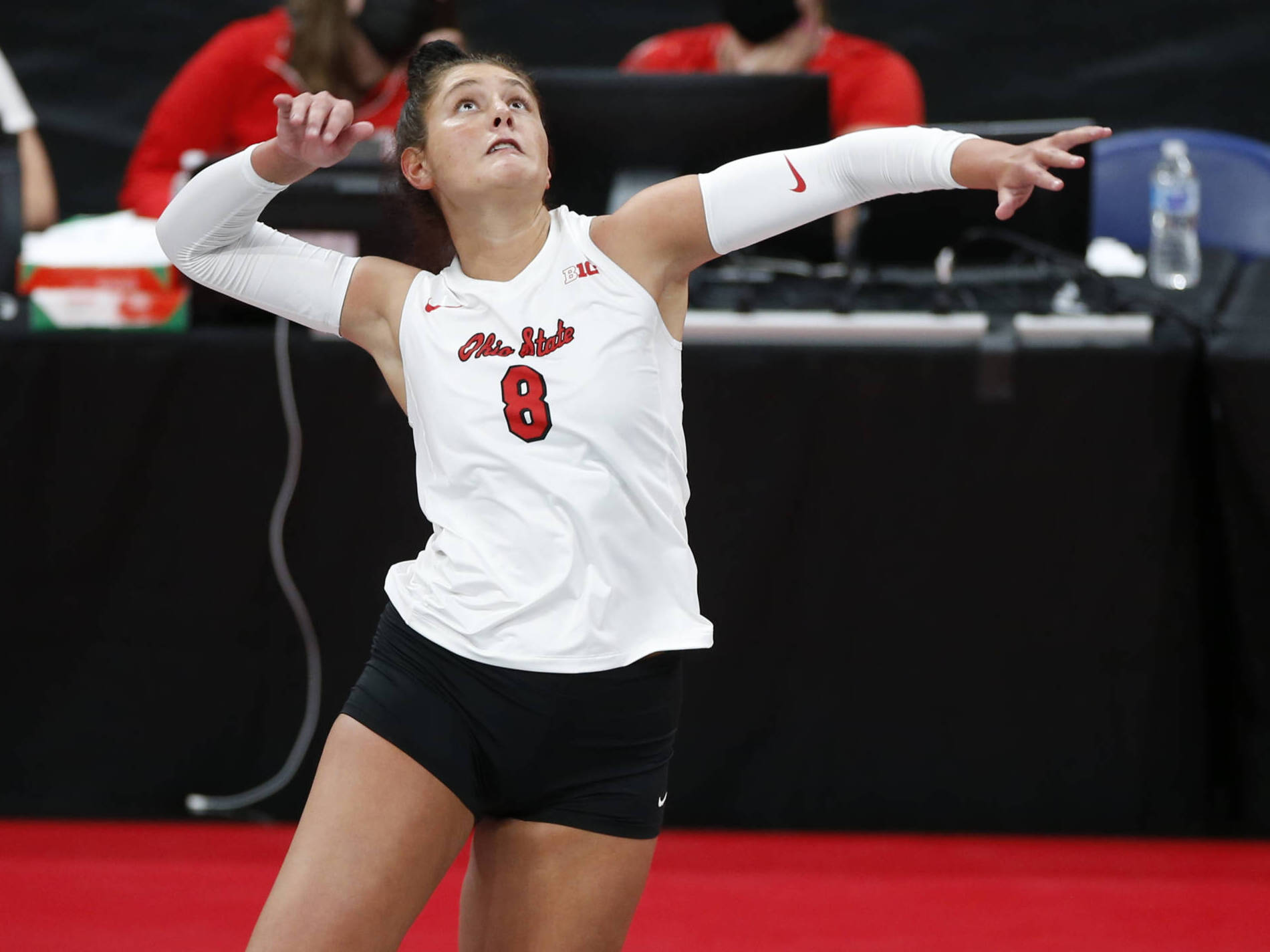 Ohio State women’s volleyball is the talk of Olympic sports at the university, and for a good reason — these girls are on fire.

The No. 6 Buckeyes traveled to Lubbock, Texas, to face Rhode Island, Texas State and Texas Tech in the Red Raider Classic at the United Supermarkets Arena.

The Buckeyes got off to a quick start, scoring the first six points of the match and forcing Rhody to call a timeout. Ohio State took a 15-10 lead and never allowed Rhode Island within five points for the remainder of the set to earn a 25-13 win.

Ohio State built a 14-point lead over Rhode Island in the second set. Rhody made a run late in the set, but the Buckeyes advantage proved too much to overcome, and Ohio State won 25-11.

In the third set, Rhode Island took its first lead of the match by claiming the opening point. Ohio State would go on to capture a commanding 20-9 lead before scoring the set’s final three points. The Buckeyes secured their sweep.

The back-and-forth match started with two set victories for Ohio State. However, Texas State stormed back in the third set to claim a 23-25 win. The Bobcats scored the first point of the set before allowing the Buckeyes to take a 3-1 lead. Both teams traded leads for the remainder of the set until they tied at 23. Texas State claimed the final two points, giving the Bobcats the set.

In the final set, Ohio State scored the first five points, including back-to-back blocks, forcing Texas State to take a timeout. The Buckeyes extended their lead to eight points, 14-6 before four consecutive points from the Bobcats cut the lead to four. Ohio State closed the door, scoring 11 of the next 16 points to win the set, 25-15, and take the match.

Both teams traded points at the beginning of the first set, but Ohio State separated itself with a 9-1 run leading to a 15-8 advantage before a media timeout. The Buckeyes held onto their lead, dominating the Red Raiders and winning the set 25-14.

Ohio State took an early 8-3 lead in the second set, causing a Texas Tech timeout. After the break, the Buckeyes extended their lead to 13-5. The Red Raiders made things interesting, cutting the lead down to four, but Ohio State managed to slip away to claim a 25-15 win.

The Buckeyes grabbed a 9-3 lead in the third set. Texas Tech would come no closer than five points as Ohio State stretched the lead to 15-7 at the media timeout. The Buckeyes led by as many as 10 points and wrapped up the set with four consecutive points to win 25-13.

Rylee Rader was named the Red Raider Classic Tournament MVP after not committing a hitting error all weekend. Emily Londot and Kylie Murr joined Rader on the All-Tournament team.

Ohio State (5-0) will travel to Virginia for a three-match road trip next weekend. The Buckeyes will play against James Madison, Virginia Commonwealth and the host Virginia.

The No. 22 Ohio State field hockey team dropped its first contest, suffering a 3-1 loss to Kent State on Aug. 31.

Ohio State’s Megan McKenna scored her first career goal to give her team a 1-0 lead six minutes into the second quarter. Kent State battled back with a goal from Luisa Knapp right before the break.

The Golden Flashes put together an offensive flurry early in the third quarter, scoring twice in less than two minutes. Jenna McCrudden scored an unassisted goal, and Ashley Bonetz found the back of the cage one minute later, leading to Kent State’s 3-1 win.

Ohio State continued its season with a thrilling 4-3 double-overtime win over Lafayette on Sep. 3 at Buckeye Varsity Field.

The Buckeyes trailed 2-0 at halftime and 3-2 late in the second half before coming back. Emma Goldean scrambled in front of the cage before scoring with 3:42 remaining in regulation to tie the game at 3-all.

With the win, Ohio State moves to 2-1 this season. The Buckeyes’ next competition will be in Buckeye Invitational on Monday at 3 p.m. when it hosts in-state foe Miami University.

Ohio State women’s soccer dominated possession and pace against No. 18 UCF on Sep. 2 and came away with a 4-2 victory at Jesse Owens Memorial Stadium.

The Buckeyes scored three goals in the first 50 minutes of the match. Kayla Fischer put away the first goal in the third minute, capitalizing off a nice through ball from Kitty Jones Black. In the 34th minute, Izzy Rodriguez bent a left-footed shot from a corner kick into the back of the net. After the break, Emaly Vatne fed a pass to Fischer, who streaked down the left side of the field before finding Emma Sears in the box.

UCF scored its two goals back-to-back. Kate Bradley matched Rodriguez with a goal directly off a corner in the 70th minute. Under three minutes later, Ellie Moreno found an open lane in the Ohio State box and shot on goal. The shot rebounded off an Ohio State player and found the net.

Later in the match, Jones Black won a ball and led Sears into UCF territory. Sears found Fischer in the box, and she finished for her second goal of the game, giving Ohio State its 4-2 win.

Ohio State celebrated an early Senior Day on Sep. 3 with a convincing 2-1 win over Navy. The Buckeyes controlled the match from the start, scoring in the second minute and limiting opportunities for the Midshipmen to attack offensively.

Kailyn Dudukovich scored Ohio State’s first goal in the second minute off an assist from Kayla Fischer. Navy responded almost 20 minutes later as Carolyn Mang headed in a rebound after a Bailey Kolinski save.

Five minutes into the second half, Flotre collected a loose ball and beamed a right-footed shot into the upper left corner of the net for her first goal of the season.

Ohio State completes its early-season five-match homestand at 4-1 and will hit the road for the first time in three weeks when it heads to Dayton on Sep. 9. The Buckeyes are 10-2-1 all-time against the Flyers and won the last meeting in the 2016 NCAA Tournament.

The Ohio State men’s and women’s cross country teams started their season at the Evansville Opener at Angel Mounds State Historic Site in Evansville, Ind. Both programs won the team title and featured the top four runners in the competition.

Ohio State will travel to University Park, Pa., for its next competition — the same site as the 2021 Big Ten Championships — on Sep. 10.

Ohio State men’s soccer dropped a 2-1 decision to Xavier on Sep. 3 in its first game of the IU Classic in Bloomington, Ind. at Yeagley Field.

After neither team scored in the first half, the Buckeyes took the lead after Xavier Green scored in the 69th minute, but the Musketeers put an equalizer in the net five minutes later. Xavier put itself ahead the 77th minute and never looked back.

With the loss, Ohio State falls to 1-2 this season. The Buckeyes play their next game against Creighton at 5 p.m. tonight.