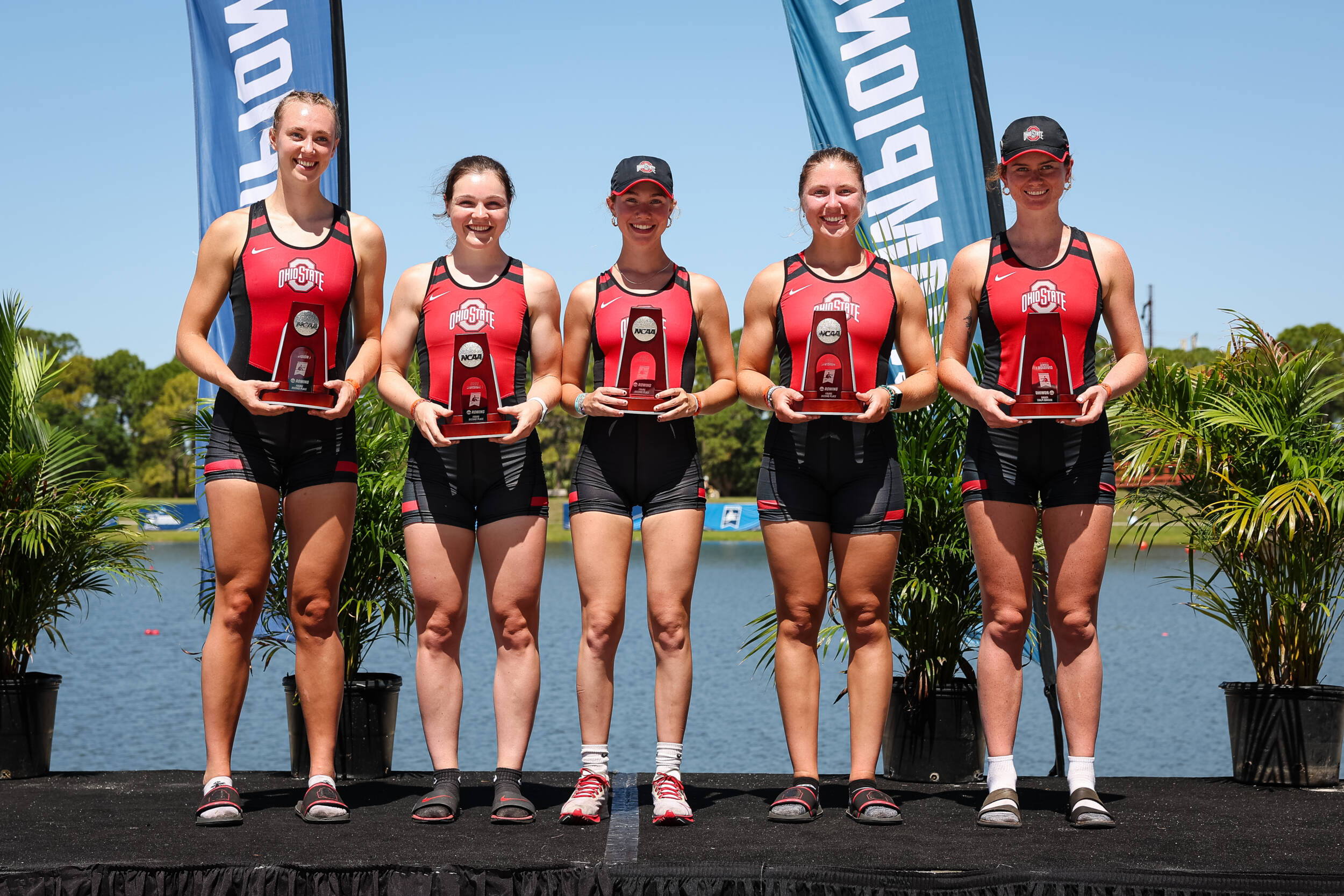 Ohio State women’s rowing finished in the No. 8 spot at the NCAA Rowing Championships in Sarasota, Fla., with a second-place race in the First Varsity Four Grand Final and a top 10 finish for the two Varsity Eight boats in the Petite Finals.

The top 6-ranked boats from the regular season progressed to the 1V4 Grand Final, with the Buckeyes as the fourth-best boat. That ranking remained as Princeton led the event, followed by Washington, Texas and Ohio State. However, OSU surged in the final moments to finish second behind the Tigers.

Brown University took an early lead at 500 meters in the 2V8 Petite Grand Finals with Ohio State in fourth behind Penn and California-Berkeley. The Buckeyes moved into third at 1,500 meters and ended in the No. 2 spot behind Brown.

In Ohio State’s final competition, the 1V8 boat was third behind Yale and Penn in the Petite Final. The Buckeyes pushed into second place behind Yale and remained within striking distance at 1,500 meters. They continued to apply pressure down the stretch and slipped in front to win the race by a few strokes.

Several Buckeyes earned All-Big Ten recognition, including Anneta and Maria Kyridou and Lexie Nothdurft on the first team, with Alessandra Montesano and Rachel DeWitte on the second team.

Third-year head coach Kate Sweeney was named the Big Ten Coach of the Year and Anneta Kyridou won the conference’s Freshman of the Year award.

Ohio State men’s golf carded its lowest round with a team score of 293 at the NCAA Championship at the Grawhawk Golf Club on Sunday. Despite the team’s strong performance, it did not make the 54-hole cut at the event.

The Buckeyes finished 23rd at the NCAAs with rounds of 300-300-293. The scoring average in the first three rounds was above 74 strokes on the par-70 layout. Ohio State played two of its three rounds in the afternoon, making the course more challenging with increasing wind and hardened greens.

Over the weekend, Adam Wallin led the Buckeyes with a 10-over par finish that put him in 55th place. Maxwell Moldovan and Jackson Chandler were right behind him at 11-over. Moldovan was even-par through 14 holes on Sunday but struggled in his final four opportunities and ended with 74 strokes, while Chandler had his lowest round of the tournament with a 4-over 74.

Patrick Schmucking rounded out his tournament with Ohio State’s lowest scorecard at 2-over 72. Still, he finished his three rounds at 18-over par. JonErik Alford closed with a round of 79 on Sunday and had a 16-over par NCAA Championship.

Eric Harrison won his heat of 200m in 20.31 seconds and took fourth overall, earning an automatic spot at the NCAA Championships. Harrison first qualified in the 100m event, running a 10.21 to take the final spot available.

Shaun Miller Jr. (high jump), Tyler Johnson (400m) and Tanner Watson (discus) also qualified for the collegiate championships in Eugene, Ore. Miller cleared 2.18m in the high jump on his first attempt, while Johnson finished the 400m in 45.49 seconds — good for fifth overall. Watson took seventh with a 56.83m throw in the discus.

Ohio State’s 4x100m relay and 4x400m teams will run at nationals after taking third and eighth, respectively. Kentre Patterson will compete in the 110m hurdles with a 13.62-second run at the NCAA Regionals, finishing ninth overall with the fastest time among non-automatic qualifiers.

The women’s 4x100m relay squad broke Ohio State’s outdoor record and facility record by running a 42.87-second dash — the event’s top qualifying time. Jaimie Robinson also broke a school record in the triple jump with a best mark of 13.60m, sending her to the NCAA Championships with a second-place finish.

Anavia Battle (11.20) and Yanique Dayle (11.24) took second in their respective heats of the 100m, while Nya Bussey ran a wind-legal personal-best 11.27 to earn the first timed qualifying spot. Chanler Robinson ran a personal-best 57.63 in the 400m hurdles to finish third in her heat and ninth overall, securing herself an automatic bid to the NCAAs.

The 4x400m relay squad finished second in the heat and fifth overall to send themselves to Eugene. Alexus Pyles advanced to the NCAA Championships in the 100m hurdles after taking third in her heat and claiming 10th overall.