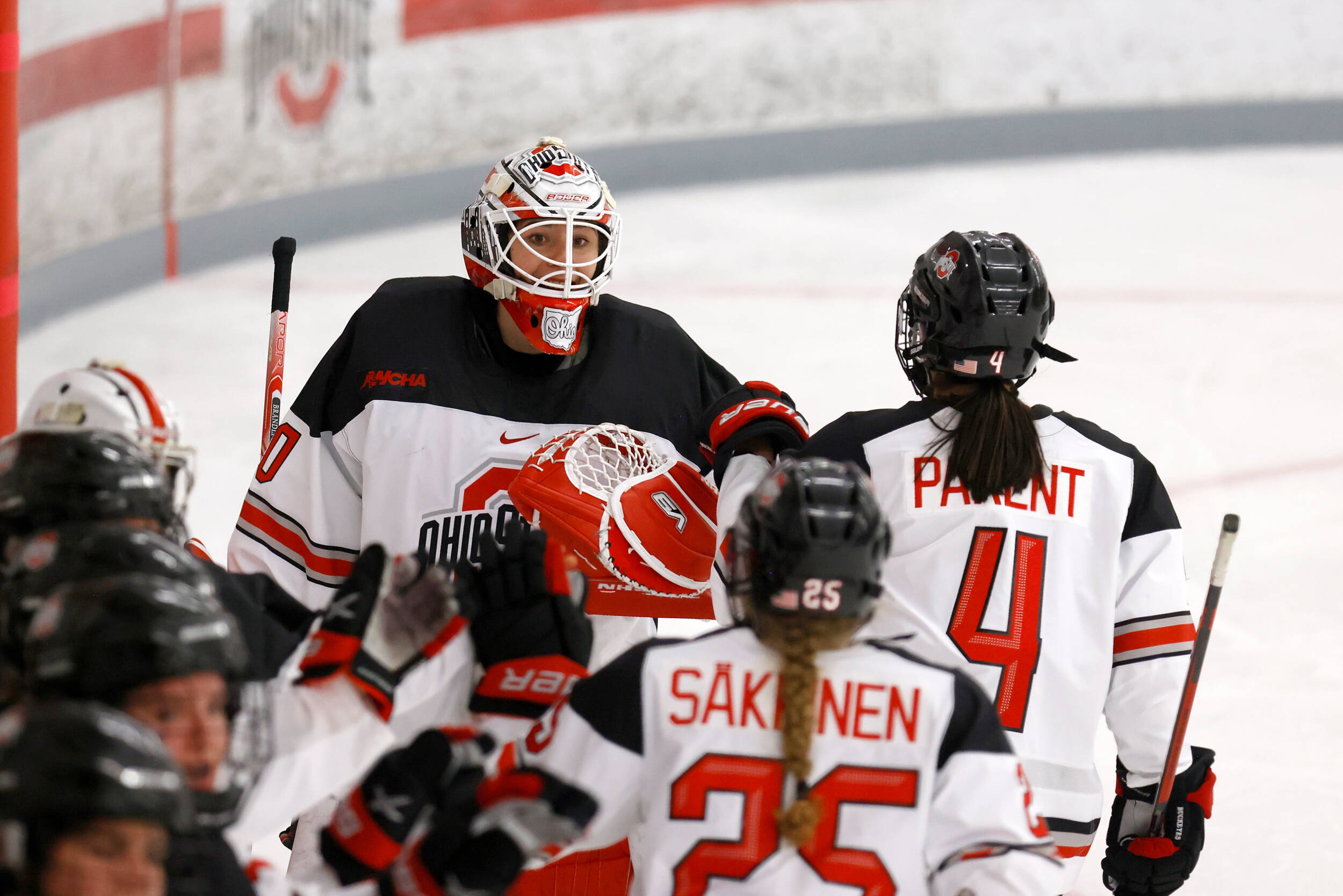 The No. 3 Buckeyes took a 6-0 win over the Tommies on Friday in Columbus. The team tallied four goals in the second period, with 11 players recording points.

Ohio State head coach Nadine Muzerall had a lot of takeaways from her team’s performance and celebrated the Buckeyes’ first win regular-season win of 2021.

“We started to become more united as a unit coming through,” Muzerall said. “I thought we did get inside a lot and didn’t do as much perimeter play that we have been known to do in the past. I thought they did well working as a unit of five when the game got going and they started working from low to high and got some shots through.

“The thing we need to work on is being relentless on the puck. That’s our bread and butter for our program and just got away from that. Some of that is first game problems. We just have to do the burners, like the stops and the starts and the little things right, and not get away with the bad rink turns and the bad habits because it will cost you eventually.”

Lexi Templeman put the Buckeyes on the board first using a pass from Eve Savander and Sophie Jaques. Emily Curlett added Ohio State’s second goal at 8:36 to put her team up two goals. Sara Saekkinen and Lauren Bernard earned assists for the score.

The Buckeyes and Boilermakers played in front of a sold-out crowd inside Holloway Gymnasium. The crowd played a significant factor in the game as the Purdue students and fans created a hostile environment — a very impressive one at that — for Ohio State and second-year head coach Jen Flynn Oldenburg.

Emily Londot recorded double-digit kills for the ninth time this season and Arica Davis continued her streak of recording at least two blocks in every match this season by finishing with three.

Ohio State entered Big Ten play undefeated, claiming the highest ranking in program history at the No. 3 team in the nation. Losing the first two conference matches isn’t ideal. Still, the Buckeyes are a talented team that will win a lot of games the rest of the season.

Ohio State and Cleveland State went scoreless for 68 minutes until Buckeye junior Channing Chasten sent a cross to sophomore captain Laurence Wootton, who finished in the bottom left corner of the Vikings goal to give his team a 1-0 lead.

Senior Devyn Etling added another goal — his first of the season — in the 82nd minute to give the game its 2-0 final. It was Ohio State’s second-straight shutout against an in-state opponent after beating posted then-No. 7 Akron last week.

Ohio State (3-4-1, 0-1-0) lost to No. 7 Maryland, 2-1, in its Big Ten opener on Friday at Jesse Owens Memorial Stadium, 2-1. The Terps held a two-goal lead before Buckeye sophomore captain Laurence Wootton scored on a penalty in the 66th minute.

The Buckeyes had several chances to score early in the second half, but Maryland’s goalkeeper generated four saves. The Terps defense parked the bus and stopped the Ohio State offense in its tracks in the game’s final minutes.

Ohio State freshman Kailyn Dudukovich followed up her game-winner on Sunday with two more goals on Thursday vs. Minnesota. Still, the Golden Gophers answered with four goals over the final 65 minutes to come away with a 4-2 victory.

Minnesota had allowed just two goals all season entering its game with the Buckeyes. Ohio State — led by Dudukovich — matched that total in the first 22 minutes.

Ohio State followed up its loss to Minnesota with a 1-0 victory over No. 12 Penn State on Sunday.

Senior Izzy Rodriguez scored off a free kick in the 66th minute and Ohio State’s defense made many quality stops to defeat the Nittany Lions in State College, Penn. The Buckeyes (7-4-0) improved to 2-1-0 in the Big Ten., while Penn State Lions lost their third consecutive conference match.

The Buckeye win is Ohio State’s eighth over Penn State in the all-time series and the first since 2017. It was also the first in State College since 2008.

The Ohio State men’s tennis team opened the fall portion of the season on Sept. 20 and Sept. 25 in two different locations, performing well in both events.

Senior James Trotter and redshirt-junior Andrew Lutschaunig claimed a pair of wins and reached the finals of the ATP Challenger Tennis Open Championship in Columbus.

The duo took down Evan King and No. 107 Jackson Withrow in the first round 7-6(4), 5-7, 10-7. In their second match, they defeated Yunseong Chung and Seong-chan Hong 6-2, 6-4 in the semifinals to reach Saturday’s championship match.

In the finals, they battled Stefan Kozlov and Peter Polansky but lost in two sets. Despite the runner-up finish, the pair are headed poised for an excellent season.

The rest of Ohio State’s team headed south to compete in the Southern Intercollegiates at the University of Georgia. In addition to the Bulldogs, the Buckeyes took on players from USC, Texas and Mercer.

Ohio State women’s tennis competed at the ITA Midwest Invitational over the weekend. Here are the results: