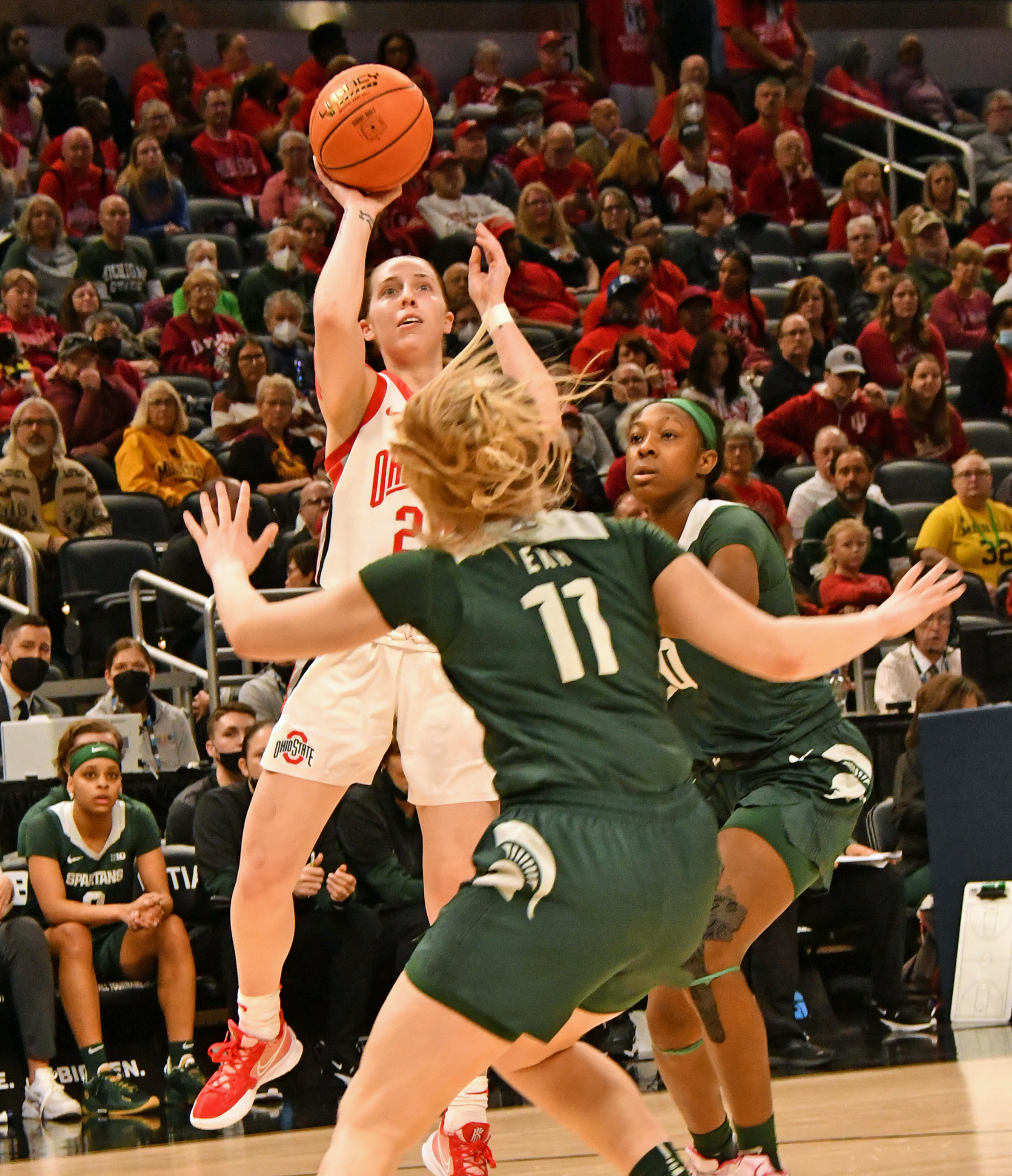 The season ended just days ago for Ohio State women’s basketball, but the Buckeyes have already received a massive boost for next year. Senior guard Taylor Mikesell announced Monday that she will be returning for a fifth year (her second at Ohio State) granted by the NCAA due to COVID.

Mikesell transferred to Ohio State this past season after two seasons at Maryland and a season of Oregon, where she became known for her 3-point shooting prowess.

Despite only gaining eligibility for the 2021-22 season days before the campaign was set to begin, Mikesell slotted right into the lineup for Ohio State head coach Kevin McGuff, and started all 32 games for the Buckeyes, who finished with a 25-7 record.

“She’s got a lot of experience at a couple of different programs where they were at a high level,” McGuff said earlier this season. “Every day, her work ethic and just knowing what it takes to be successful at this level has been really good for our young players.”

Mikesell helped lead Ohio State to a share of the Big Ten regular-season title, as well as the school’s 12th appearance in the Sweet 16 (and first since 2017). She averaged 18.6 points and 3.5 rebounds per game, shooting 48.2 percent from the field and 47.5 percent from deep, which ranks second in the nation and first among shooters with at least 130 attempts.

She tied the Ohio State single-game record for most makes from deep without missing with five, and also set career single-game highs in points (33 vs. Maryland, Jan. 20) and made threes (eight vs. Illinois, Jan. 6).

Mikesell’s strong shooting and volume – nearly eight 3-point attempts per game – had the Buckeyes near the top of the country in 3-point shooting at 37.6 percent despite only three other significant contributors on the roster – Miller, redshirt sophomore guard Rikki Harris and junior guard Jacy Sheldon – shooting above 30 percent from deep.

“Taylor’s a super skilled player,” senior guard Braxtin Miller said earlier in the postseason. “She shoots the three like no other. She can even get it off the bounce and get a floater and things like that. She’s a threat for sure. I’m super proud of everything she’s brought to the team this year. She’s really impressive, and I love that for her.”

With Mikesell back, McGuff suddenly finds himself with more potential starters than he knows what to do with. Ohio State returns Mikesell, junior forward Rebeka Mikulasikova and Sheldon, who played in and started all 32 games, as well as Harris, who played in every game and started 19.

The Buckeyes will also return guard Madison Greene, who was expected to run point for Ohio State before suffering a season-ending injury just days before the 2021-22 campaign was set to begin. With the rise of freshman guard Taylor Thierry adding some additional depth, Ohio State will enter next season with a good problem to have.