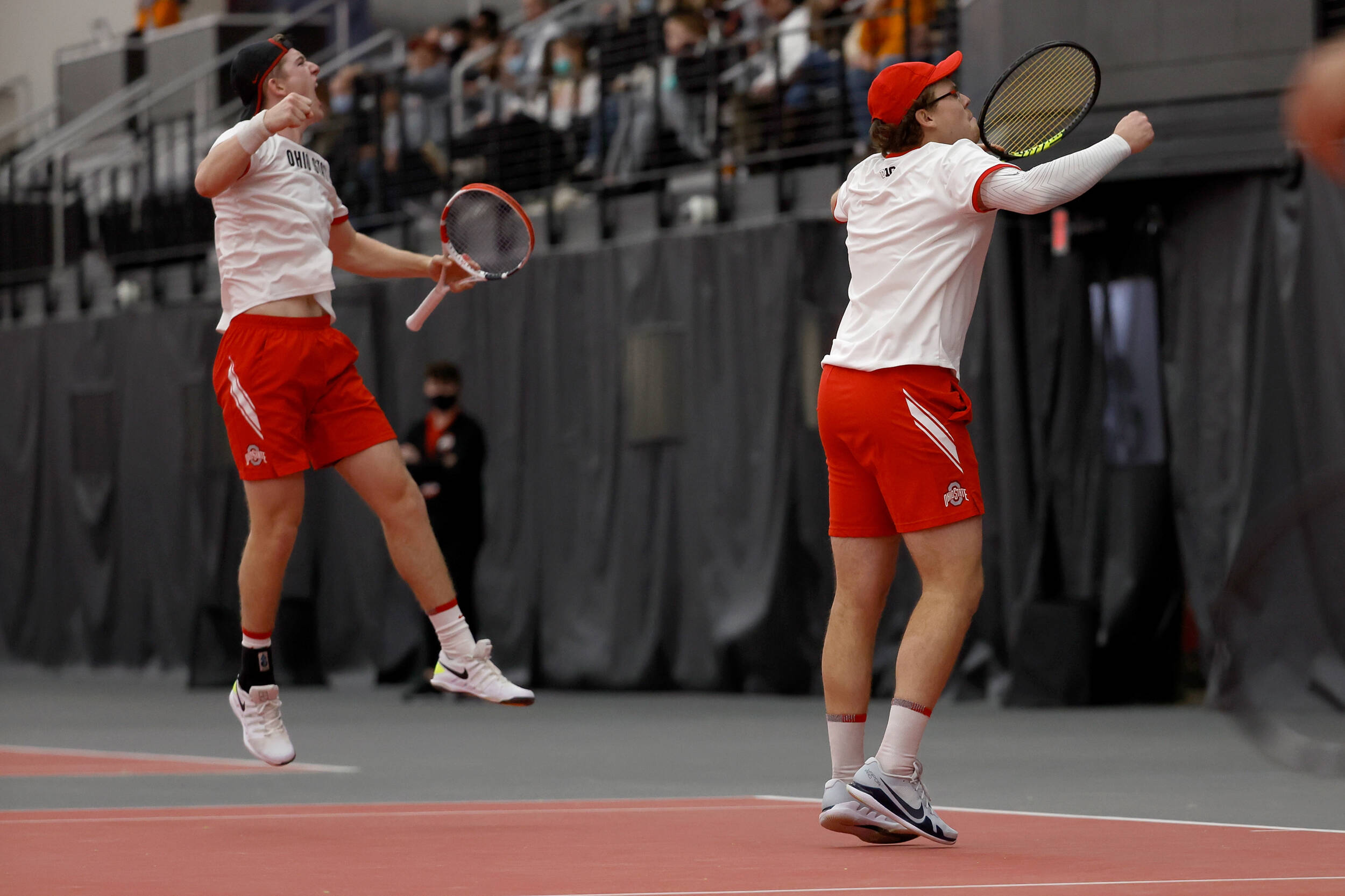 Ohio State men’s tennis dominated in a 4-0 victory over No. 1 Tennessee on Feb. 4 at the Ty Tucker Tennis Center. But that’s not all. The team manufactured another sweep against No. 6 Virginia on Feb. 6, avenging their home loss to the Cavaliers from last season.

The No. 5 Buckeyes (7-0) started the weekend with a win over the top-ranked Volunteers. Cannon Kingsley and JJ Tracy finished on court three with a dominant 6-2 victory. The nation’s best doubles pairing, Matej Vocel and Robert Cash defeated the No. 6 duo Emile Hudd and Shunsuke Mitsui, 6-3.

James Trotter finished first on court three with a quick 6-0, 6-1 win in the singles matches. Tracy followed on court four with a win, while Kingsley sealed the Buckeye upset over the Volunteers after beating No. 10 Johannus Monday, 7-6 (4), 6-3.

Ohio State earned its second sweep in three days and sixth in 2021-22 when it defeated Virginia. The Buckeyes relied on Vocel, Cash, Kingsley and Tracy to win their seventh doubles point of the year in seven attempts.

James Trotter again finished first on court three with a quick 6-3, 6-2 win. Kingsley followed on court one with a dominant 6-3, 6-2 win over No. 13 Chris Rodesch. Vocel sealed the Buckeye victory with his 6-3, 6-3 straight sets win.

Ohio State women’s hockey swept Minnesota State with a 7-1 win over the Mavericks on Feb. 5 in Mankato, Minn. Defenseman Sophie Jaques set an Ohio State record for points in a season at her position, finishing with three assists and bringing her to 47 points this year.

Ohio State produced two goals in the first period. Lexi Templeman struck first at 16:07, collecting a rebound from Clair DeGeorge’s initial shot. Jenna Buglioni scored with 27 seconds left after tapping in a loose puck in front of the Minnesota cage.

Gabby Rosenthal scored the Buckeyes’ third goal at 4:13 into the second. The senior stopped a Maverick transition at center ice with Liz Schepers taking possession of the puck. She sent it back to Rosenthal, who struck from the slot to give Ohio State a three-goal lead. Minnesota State scored its first goal at 5:34 in the second period.

Ohio State scored four goals in the final stanza. Madison Bizal beat the Mavericks’ defense and scored at 2:12. Later, Paetyn Levis took a shot toward Minnesota State goaltender Calla Frank, who deflected the puck behind the net. Schepers secured the puck and floated it toward the blue line and deflected it into the net for a goal.

Jaques assisted on Ohio State’s final two goals from rebounded shot attempts. Jenn Gardiner took advantage of the first rebound, sending a shot past Frank on the right side. Rosenthal recovered the second Jacques rebound at 18:34 for a backhanded goal to push the Buckeyes up 7-1.

The week before the Buckeyes faced the Mavericks, Jacques was named the WCHA Defender of the Month for her performances in January. She led the Buckeyes with 14 points on a team-high five goals and nine assists in six games, scoring in all but one contest.

The Buckeyes honored seniors Camryn Carrasco, Ava Lichter, Paula Luis, Cassie Neeley and Haley Watson before the meet. The 2022 graduates helped the Buckeyes to a U.S. Collegiate Championship in 2019 and have over 30 first-place finishes, two regional championship routines and even an undefeated 2020 season in their four years with the program.

Ohio State started with the trio competition. Hannah Heffernan, Paige Hopper and Rachel Jager scored an 82.6333 with an impressive routine to earn a first-place finish. Luis, Watson and Wong took second with a season-high score of 77.4000.

In the duo competition, Laila Huric and Nikki Dzurko scored an 84.9667 to win the category for the second straight meet. Emily Armstrong and Ruby Remati followed in second place with 84.3333. Carrasco and Rose Homoelle scored an 81.5333, while Victoria Carlson and Carol Walsh ended with a 75.667.

The team competition was the final event of the afternoon. Carrasco, Lichter, Luis, Olivia Malloy, Trinity Patton, Olivia Schafer, Watson, and Megan Wong took first place on the Gray Team with a routine score of 82.1333. The Scarlet Team performed an unscored exhibition for fans at the McCorkle.

Buckeye Sports Bulletin covered women’s basketball, men’s ice hockey and wrestling in the latest print publication that will be sent to subscribers on Feb. 8 with a Feb. 12 publishing date. For four free issues of the print edition of Buckeye Sports Bulletin, no card required, sign up at the link here: http://www.buckeyesports.com/subscribe-4issue-trial/ or call 614-486-2202.