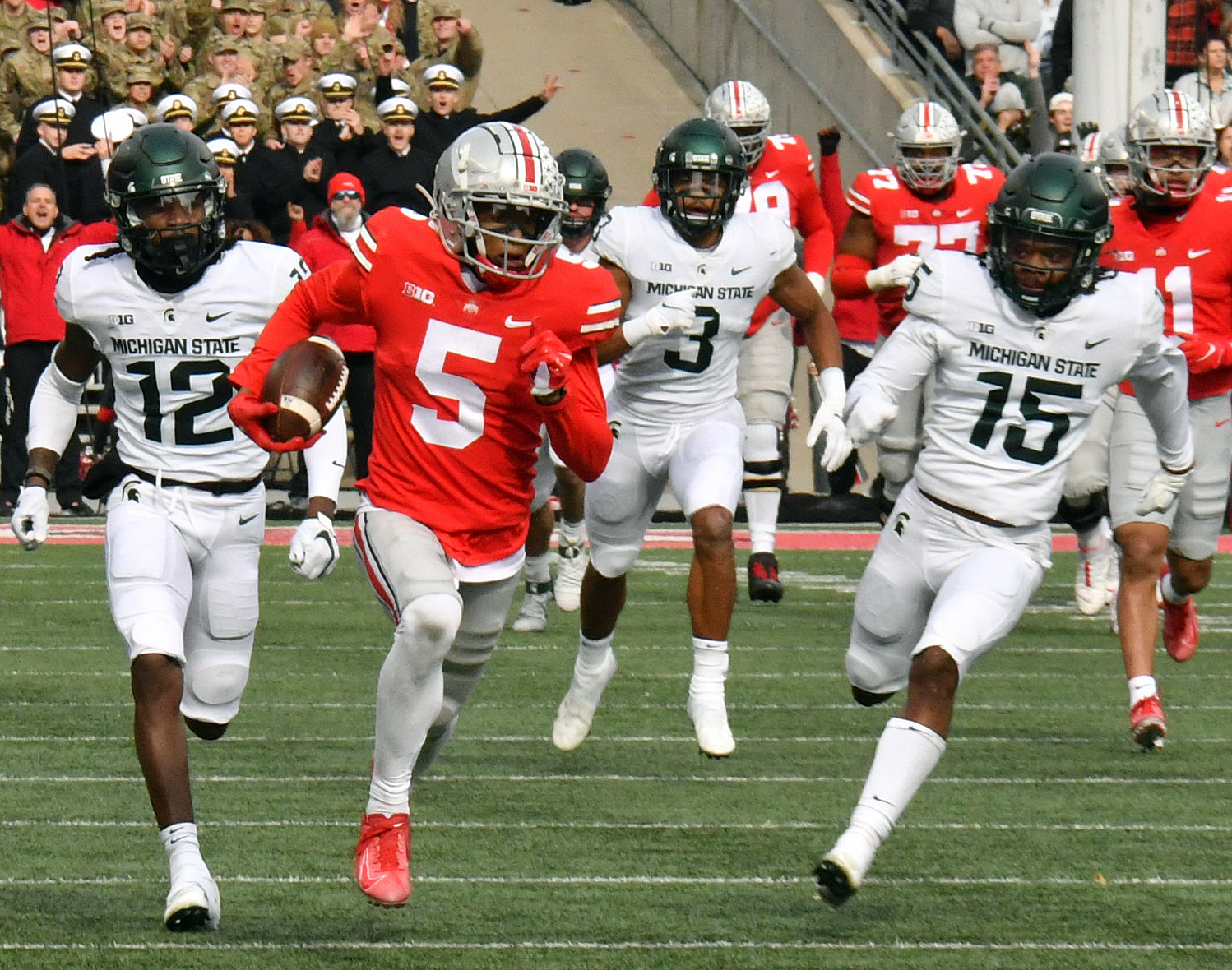 Former Ohio State receivers Garrett Wilson and Chris Olave were selected in the first round of the 2022 NFL Draft on Thursday, with Wilson picked No. 10 by the New York Jets and Olave selected at No. 11 by the New Orleans Saints.

With their first-round selection, they join an elite group of wide receivers at Ohio State that have heard their named called on the first night of the NFL Draft.

Ohio State’s experience with receivers getting taken in the first round dates back to Paul Warfield in 1964, who was selected with the No. 11 overall pick by the Cleveland Browns. He played his first six seasons with the Browns before playing in Miami for five seasons. Following a one-year stint in the World Football League, he returned to Cleveland for two seasons before retiring, finishing his career with 427 receptions for 8,565 yards and 85 touchdowns, and was inducted into the Hall of Fame in 1983.

The Buckeyes would have to wait another 31 years for a receiver to get taken in the first round, with the streak finally broken by Joey Galloway in 1995. The Seattle Seahawks selected Galloway with the eighth overall pick that year, and he went on to have a journeyman’s career, playing for five teams across 16 seasons. He finished his playing career with 701 receptions for 10,950 yards, hauling in 77 touchdowns.

Galloway’s selection began a stretch of three first-round receiver selections in five years. Terry Glenn was taken No. 7 overall the following season by the New England Patriots – the highest an Ohio State receiver has been taken in the draft so far – while David Boston was selected No. 8 overall in 1999 by the Arizona Cardinals.

Glenn played for 12 seasons, accruing 593 receptions for 8,823 yards and 44 touchdowns, and was still with the Patriots when they won Super Bowl XXXVI. Boston’s career was less illustrious, lasting just six seasons due to several injuries and off-the-field issues. Even so, he was still named an All-Pro in 2001 when he finished with 98 receptions for 1,598 yards and eight touchdowns.

Michael Jenkins and Santonio Holmes were the next two up, with Jenkins taken No. 29 overall in 2004 by the Atlanta Falcons and Holmes going to Pittsburgh in 2006 with the No. 25 overall selection.

Jenkins played nine seasons – seven with Atlanta and two with the Minnesota Vikings – but did not find a home following his release from New England during the 2013 offseason. He left the game with 354 receptions for 4,427 yards and 25 touchdowns, surpassing 500 receiving yards in five of his nine seasons.

Holmes, meanwhile, also had a nine-year career, highlighted by his fourth season in which he finished with 79 receptions for 1,248 yards and five touchdowns, and was named the MVP of Super Bowl XLIII following his highlight reel catch in the corner of the end zone to secure the Steelers’ 27-23 win. He played four seasons each with the Steelers and Jets, and following one season with the Chicago Bears in 2014, officially announced his retirement in 2017 with 389 career receptions for 6,030 yards and 36 touchdowns.

The next season, Tedd Ginn Jr. and Anthony Gonzalez became the first pair of Ohio State receivers to be taken in the first round of the same NFL Draft. Ginn went No. 9 overall to Miami, while Gonzalez was taken by the Indianapolis Colts with the final pick of the first round.

Ginn went on to play 14 seasons in the NFL with six teams, with no more than three seasons spent with any one team. He retired in the 2021 offseason with 412 career receptions for 5,742 yards and 33 touchdowns. Gonzalez played just five seasons before retiring and getting into politics, where he has served in the U.S. House of Representatives since 2018.

Ginn and Gonzalez would be the last first-round selections for Ohio State until Olave and Wilson, but with several Buckeyes seemingly on deck – including Jaxon Smith-Njigba next season – it doesn’t appear Ohio State will have to wait long to see another receiver taken in the first round of the NFL Draft.