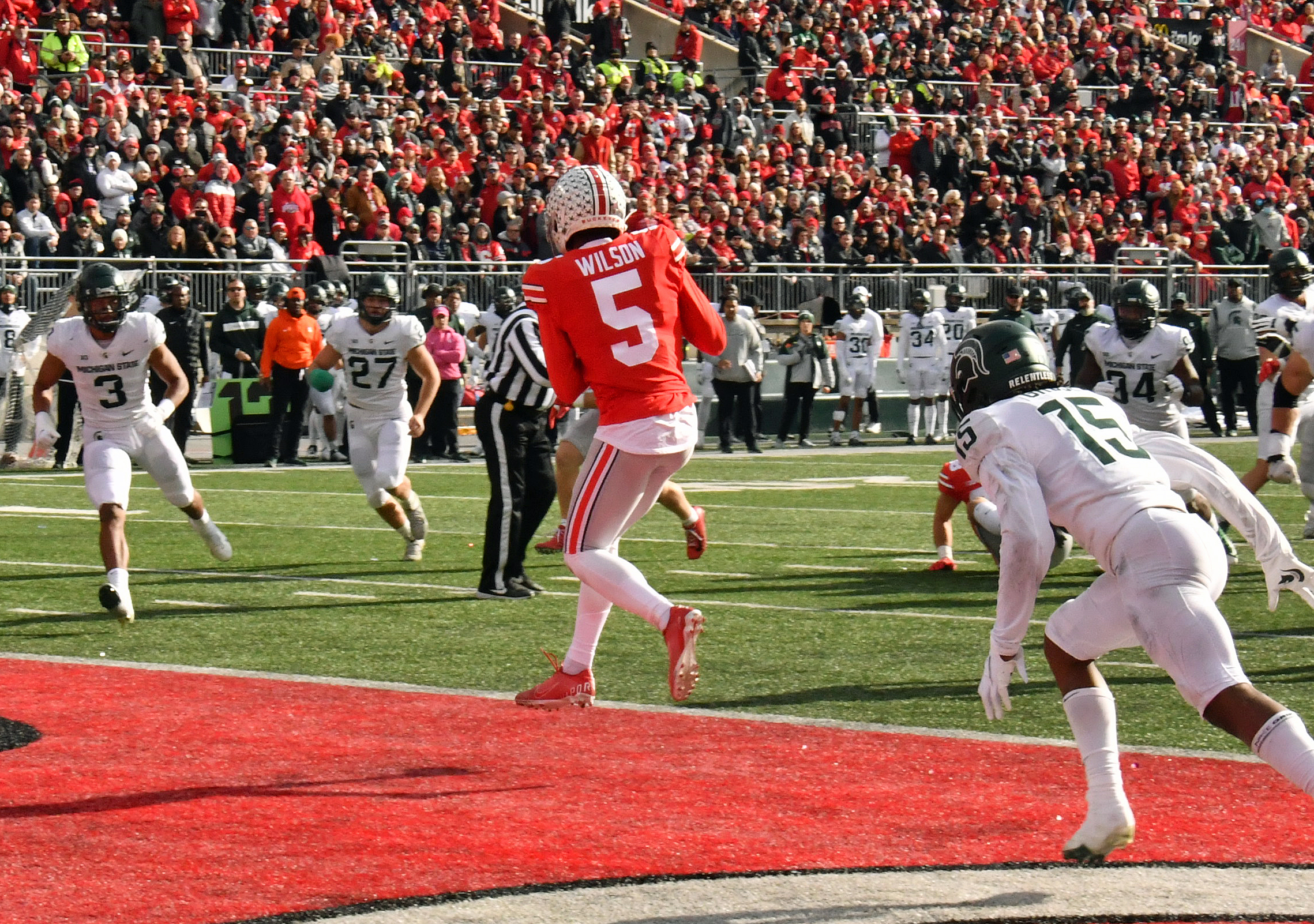 Former Ohio State wide receiver Garrett Wilson was selected by the New York Jets with the No. 10 pick in the first round of the 2022 NFL Draft. He was Ohio State’s first player to come off the board.

Wilson is Ohio State’s first receiver to come off the board in the opening round since 2007, when Ted Ginn Jr. and Anthony Gonzalez went to the Miami Dolphins and Indianapolis Colts, respectively.

A former five-star out of Austin (Texas) Lake Travis, Wilson was the No. 20 overall prospect in 2019 and made an immediate impact upon his arrival in Columbus.

Touted for his route running, hands and athleticism, Wilson cracked the Buckeye lineup as a true freshman. He reeled in 30 receptions for 432 yards and five scores while working as Ohio State’s first receiver off the bench, highlighted by a 118-yard performance with a score on three receptions in the regular-season finale against Michigan.

An unquestioned star in tandem with Chris Olave in 2020, Wilson hauled in 43 receptions for 723 yards and six touchdowns in seven games during the shortened season, establishing himself as one of the nation’s best young receivers. He furthered his standing as a junior, setting career highs across the board with 70 receptions for 1,058 yards and 12 touchdowns. He delivered perhaps the game of his career in a Buckeye win against Purdue, catching the ball 10 times for 126 yards and finding the end zone through the air three times, while carrying once for another 51 yards and a fourth total score.

The Draft Network’s scouting director Kyle Crabbs projected Wilson as a first-round pick and many analysts considered him the best receiver in the draft. He was the second receiver to come off the board behind USC’s Drake London.

“Wilson is a dynamic threat with the ball in his hands and offers the kind of run after catch ability that is sure to command a role at the NFL level,” Crabbs wrote. “Wilson, who was a part of the crowded wide receiver room in Columbus and has enjoyed a career year in 2021, projects best to the NFL game as a slot receiver, where his short-area agility will afford him more room to work and create space and he can be more naturally crafted quick touches for an offense that commands spacing issues with a prominent vertical passing attack.

“Those conditions parallel what Wilson often works with at Ohio State and would help to both maximize his immediate impact and allow the same creative touches he sees in college to follow him to the pros. I appreciate Wilson’s versatility as an offensive weapon and would hope to see him placed into a role that features him in the RPO game as a bubble/glance threat, as a jet motion option to get him leverage to the perimeter quickly, and as an underneath receiver that utilizes his burst to carry across the middle of the field in mesh/drive concepts as the underneath target.”