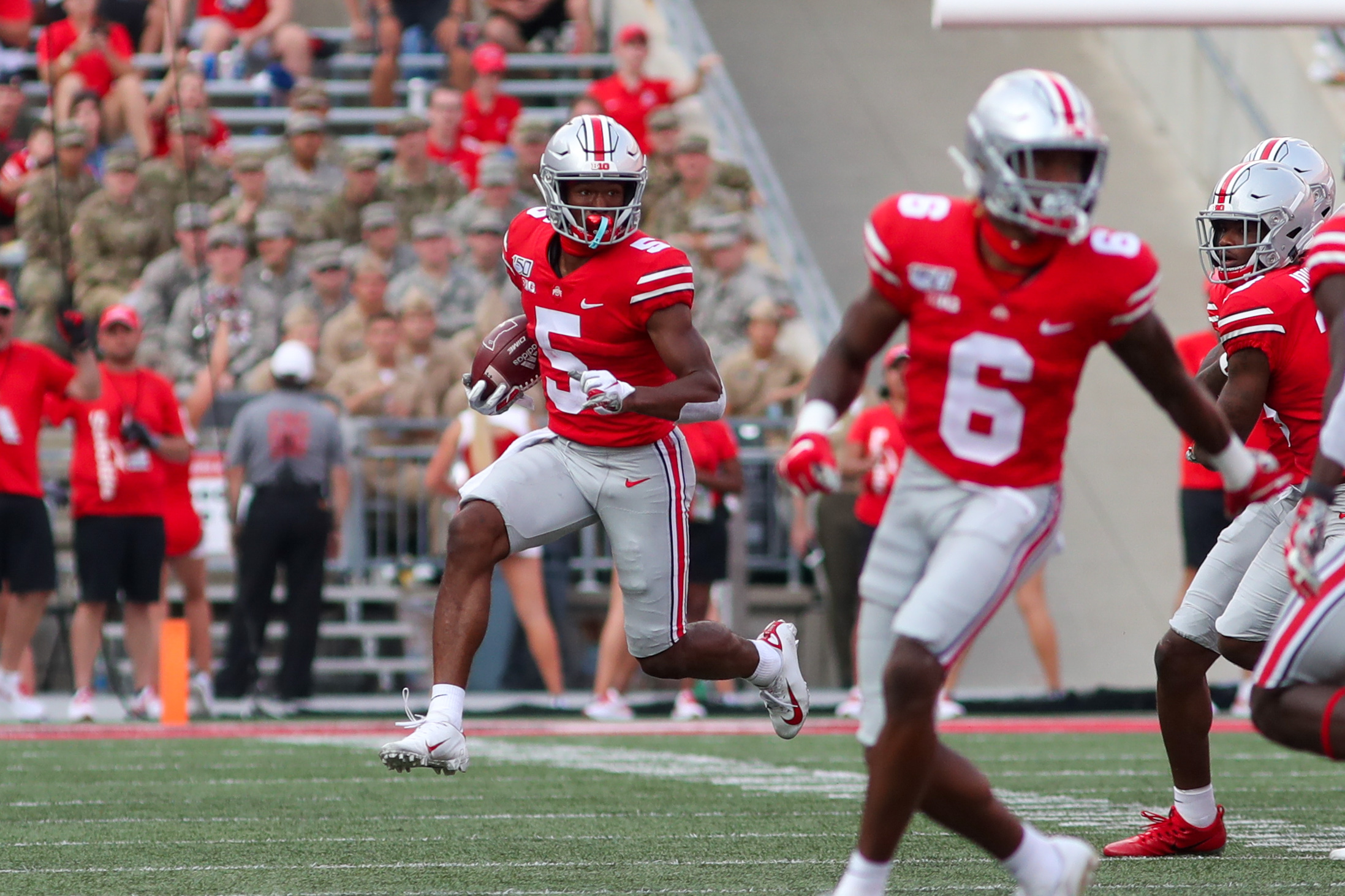 While Wilson was the nation’s No. 2 wideout, Williams ranked No. 13, and the duo represented two of the Buckeyes’ top four commits for the class.

Wilson was a five-star recruit from Austin (Texas) Lake Travis, where he hauled in 204 receptions for 3,359 yards and scored 55 total touchdowns for his career, despite missing time due to injury.

Meanwhile, Williams was thriving at St. Louis (Mo.) Cardinal Ritter, where he reeled in 104 receptions for 2,792 yards and 37 touchdowns as an upperclassman, adding three returns for scores as a junior.

The two talented wideouts formed a bond during their recruitment days, which only grew stronger once they officially became Buckeyes.

“Coming in with G, I already kind of knew G from camps and we used to chop it up here and text each other,” Williams said at Fiesta Bowl Media Day on Dec. 26. “G is like my bro – that’s my brother.”

Wilson and Williams naturally forged a friendship with both of them hungry for playing time as they entered their first collegiate seasons after tearing up the high-school ranks. That bond was formed through a shared competitive spirit.

While competing with each other for reps, Wilson and Williams found themselves becoming closer off the field. The two have been often inseparable and always supportive.

Wilson emerged as an immediate contributor and downfield threat for the Buckeyes in year one, showing improvement as the season progressed.

On the season, Wilson corralled 30 catches for 432 yards and six touchdowns, which included some acrobatic grabs.

The first touchdown of Wilson’s career was also his first catch as a Buckeye. Facing third-and-8 from the 9-yard line, sophomore quarterback Justin Fields found the talented freshman in a one-on-one matchup in a 21-0 game against Cincinnati. Fields threw the ball up and Wilson, despite only being 6-feet tall, went up and won the jump ball.

Two weeks later against Miami (Ohio), the Buckeyes led 49-5 less than three minutes into the second half when Wilson made another highlight-reel play. Backup quarterback Chris Chugunov launched a bomb to the end zone on first-and-10 from the Miami 38-yard line, which Wilson tipped to himself amid contact and eventually hauled in while bobbling it to the ground.

The former five-star showed why he was so strongly sought after as a recruit on numerous occasions, including a performance against archrival Michigan that will forever endear him to Ohio State fans.

Wilson snagged three receptions for 118 yards and one touchdown against the Wolverines, including one of the Buckeyes’ best plays in a 13-1 season.

Also, Wilson rose to the occasion on the biggest stage in his performance against Clemson in the College Football Playoff semifinal. He hauled in four passes for 47 yards, including a gravity-defying catch near the Ohio State sideline.

While Wilson enjoyed more reps, highlight plays and attention as a first-year receiver, Williams flashed his elite speed and playmaking ability when given the chance.

The St. Louis native had an impact on special teams, often representing the first Buckeye down the field on kickoff with his high-end speed. That speed is part of what made Williams such a highly touted recruit. In high school, he broke the Missouri state record in the 300-meter hurdles, which was previously set by Ohio State running back Ezekiel Eliott.

Williams showed that speed in the Buckeyes’ early-season game against Miami (Ohio), when he caught a simple slant route from backup quarterback Gunnar Hoak and blazed past the RedHawk defense for a 61-yard touchdown.

He only totaled six catches for 112 yards and the one score for the season with few reps, but taking a slant untouched for a 61-yard touchdown shows exactly what kind of playmaking ability Williams possesses.

The dynamic duo of Wilson and Williams are only getting started, and while they have limited reps under their belts, their confidence in each other knows no bounds.