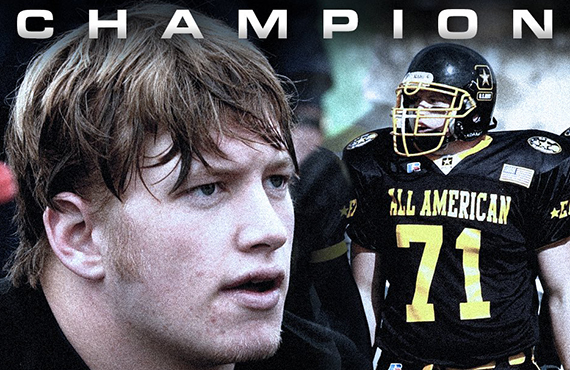 The All-American Bowl, which is widely considered the nation’s premier high school football all-star game, recently conducted a bracket-style tournament to determine the best player to participate in their annual showcase. And though he began the tournament as an eight seed, former Ohio State center Nick Mangold made an unlikely run to the title.

The fans have voted and we have a winner ❕❗️❕

“What a hell of a ride,” Mangold said on Twitter. “From a middle of the road seed to a Cinderella story to absolute miracle in front of our eyes, we did it. I say ‘we’ because you people who voted made this all possible. Thank you to each and every one of you. It’s time to party.”

A three-star prospect from Centerville, Ohio, Mangold was the backup to Alex Stepanovich on the Buckeyes’ 2002 national championship team as a freshman. He then became the starter when Stepanovich suffered a knee injury in the second game of the 2003 season and never relinquished the position.

Mangold was named a team captain and earned first-team All-American honors following his senior season, having led Ohio State to a share of the Big Ten title and a win over Notre Dame in the Fiesta Bowl. He was then selected by the New York Jets in the first round (29th pick overall) in the 2006 NFL Draft.

Mangold was New York’s starting center for 11 season, playing in 164 of a possible 176 games, and earned first-team All-Pro honors in 2009 and 2010. He was also selected to the Pro Bowl seven times. Mangold was released by the team in 2017 in a cost-cutting move, and went unsigned for the season. After one year out of football, he signed a one-day contract in 2018 to officially retire as a Jet.

Mangold graduated from Ohio State last May with a degree in operations management, earning his diploma through the university’s degree completion program alongside former wide receiver Santonio Holmes, who was a teammate with both the Buckeyes and Jets.