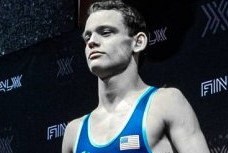 Wrestling fans have come to know the Ohio State wrestling program as a national powerhouse and the home of world-class freestyle wrestlers like Kyle Snyder and Logan Stieber.

What fans may not realize is that Ohio State is the home of world-class Greco-Roman talent, too.

Redshirt sophomore Brady Koontz proved this by defeating Indiana’s Liam Cronin in a best-of-three series to earn the 55-kg spot on the U23 World Greco-Roman Team.

Koontz had finished as the Final X runner-up on the senior level at the U.S. Marine Corps Junior Nationals in Fargo, North Dakota, placing him in a special wrestle-off with Cronin.

Koontz was a member of the 2015 Cadet World Team and wrestled at the Junior World Championships in the fall of 2018. He wrestled earlier in the summer of 2019 for a spot at the Senior World team, but Max Nowry won the spot in back-to-back matches at Final X Rutgers.

As the No.7 seed out of nine competitors at the Senior World Team Trials, Koontz cruised to the finals by blanking his first two opponents, 8-0 and 9-0. Then, Koontz bested Dalton Duffield in back-to-back bouts to take first place and advance to oppose Nowry.

As a Final X participant, Koontz earned the right to a wrestle-off with Cronin for the U23 spot. The Buckeye grappler started strong in the FargoDome, beating the Hoosier, 5-1, in the first match. However, tension rose when Cronin won the second match, 6-6, on criteria.

“Match two didn’t go my way, and obviously, I was pretty mad, mostly at myself, for getting caught in those arm throws in the beginning. I knew I shouldn’t have been reaching,” Koontz said. “After the match, I was just focusing on what I had to do. Between the matches, I was thinking about my game plan. I wasn’t planning exactly what I was going to do, but I was planning my attack.”

Koontz bounced back in the third match, winning, 3-1, and securing his spot as the 55-kg representative for Team USA at the 2019 U23 World Championships in Budapest, Hungary, Oct. 28-Nov. 2.

“I worked really hard for this, ever since Final X. My hard work is paying off,” Koontz said.

Although Nowry bested Koontz at Final X Rutgers, Koontz held his own against Cronin to secure the U23 spot. With only Nowry beating him, Koontz staked his claim as the No. 2 Greco-Roman wrestler at 55 kg in the United States.

“I’ve thought about that a couple times and how I’m just kind of amazed at how far I’ve come,” Koontz said of being No. 2 in the nation. “Because I used to be pretty bad at wrestling and I just kept working hard; I loved it no matter how hard I got my butt kicked. And it just shows to any kids out there that maybe aren’t enjoying it or maybe aren’t thinking it’s for them, you just got to keep working hard, and it’s going to pay off at some point.”