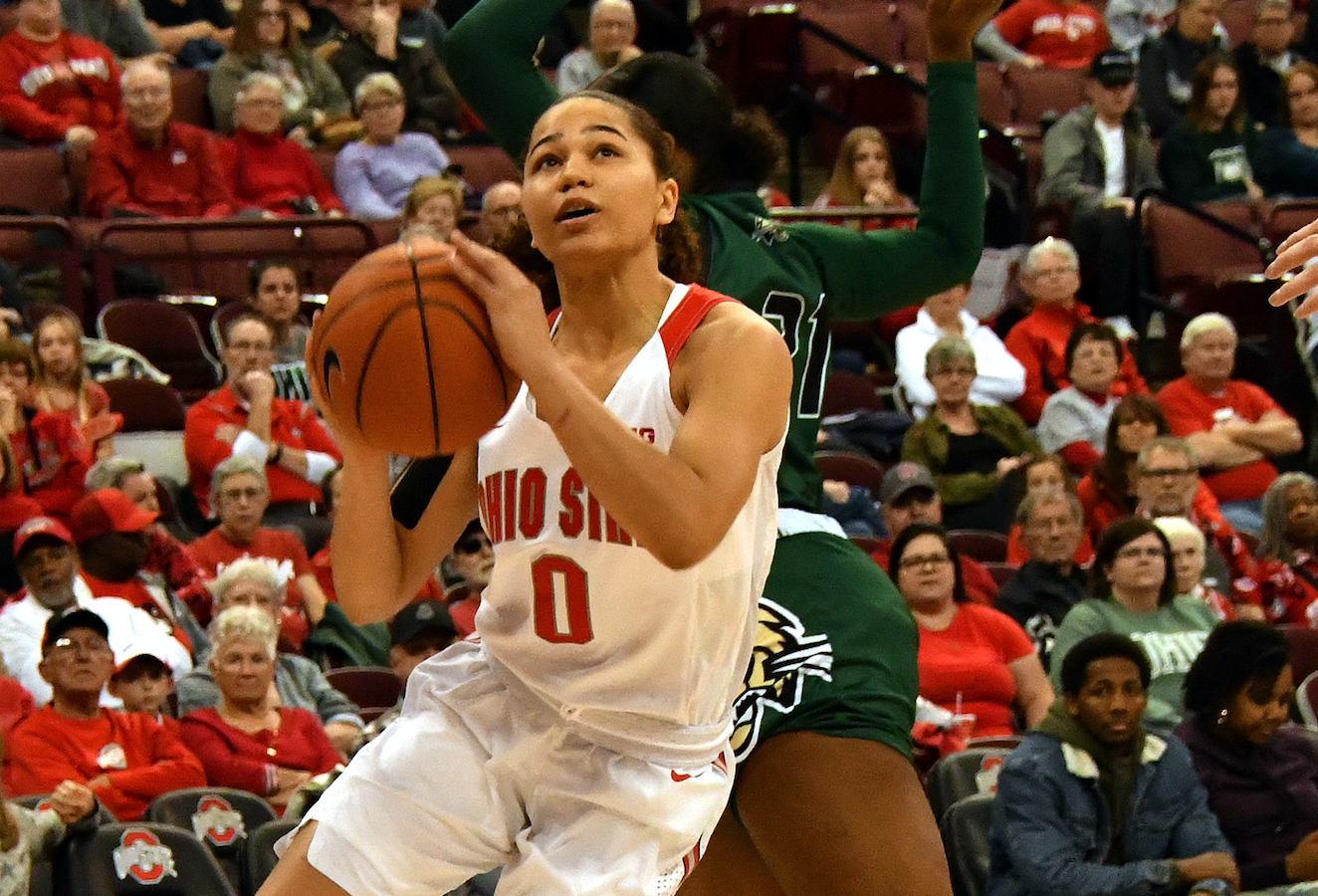 Consistency has been a struggle for Ohio State all season long, but this time, it was the inconsistency that once again shined through.

Just three days after the Buckeyes lost by 16 at home against Purdue, Ohio State went on the road against No. 24 Minnesota, the Buckeyes blew a 13-point second quarter lead, came back down seven in the fourth, and ended up upsetting Minnesota 66-63.

The win was the 400th of Ohio State head coach Kevin McGuff’s career.

“I’m not much for nostalgia, especially during the season, maybe I’ll reflect another day, but just mostly a reflection of that I’ve had a chance to coach a lot of great players,” McGuff said on his milestone. “I was really happy for the team because down the stretch we really stayed together, we played together and we had great chemistry, and it was evident on the court.”

Minnesota came into the game shooting 40.6 percent from three, No. 7 in the country. But in the game, Ohio State was able to contain the Gophers in the first half, holding them to 2-of-9 shooting from deep. But the shots started falling in the latter 20 minutes, making 4 of their 8 shots from three in the second half.

The Buckeyes did not capitalize on their three-point attempts much at all, shooting 5 of 26 from behind the arc.

Ohio State led by as much as 13 in the first half, taking a 30-17 lead before Minnesota scored 11 of the final 15 points in the second quarter to make it a 34-28 Buckeyes lead going into the second half.

But an 8-0 Minnesota run to start the third quarter gave the Gophers a two-point lead, the same lead they would take into the fourth quarter after the teams combined for a dreadful 7-of-28 shooting in the opening portion of the second half.

Kierstan Bell was the lone bright spot for the Buckeyes in the third, scoring eight of the teams 10 points in the frame, her first eight points of the contest. She continued that hot shooting in the fourth, ending the game with 13 points on 4-of-10 shooting.

The two teams then traded threes before sophomore Aaliyah Patty hit a layup with 1:40 to go to take a 64-63 lead. Patty finished a perfect 6 of 6 from the field, tallying a double-double with 13 points and 10 rebounds.

Guard Destiny Pitts and forward Taiye Bello were the stars for Minnesota, with Pitts’ game-high 26 points and Bello’s 14 rebounds pacing the team. On the whole, the Gophers relied heavily on their starting five, scoring only 2 bench points compared to Ohio State’s 25.

“I think that’s one of the strengths of this team is we have a lot of people we can put in the game, we have a lot of depth, and that was evident,” McGuff said. “It was a really hard fought, physical game today, so we needed all that energy down the stretch from everybody.”

But one of Pitts’ eight turnovers came with 34 seconds in the game, a turnover that sealed the win for the Buckeyes.

Free throws were a crucial factor in the game, with the Gophers hitting 19 on 23 attempts, while Ohio State only attempted 13, making nine of them.

Freshman guard Madison Greene made her first collegiate start for Ohio State against Minnesota following a 12-point performance against Purdue that tied for a team high. Against the Gophers, Greene scored six points on 3-of-6 shooting.

“She’s been really steady, she executes the offense when she’s in there, she’s a really tough defender, too,” McGuff said. “She just seems to make other people better when she’s on the court.”

Ohio State’s most veteran player, junior guard Braxtin Miller, continued her shooting struggles in this game. Miller came into the game 1 of 20 on her last 21 three-point attempts, and finished with four points on 2-of-10 shooting, including 0 for 4 from three.

“She’s playing a lot of minutes, so it could be fatigue a little bit, but you know it’s as long as she keeps taking good shots, they’re going to fall,” McGuff said. “She’s a great shooter, she can really score the ball, and I’ve got a lot of confidence in her, she’s going to make a couple and then she’s going to explode.”