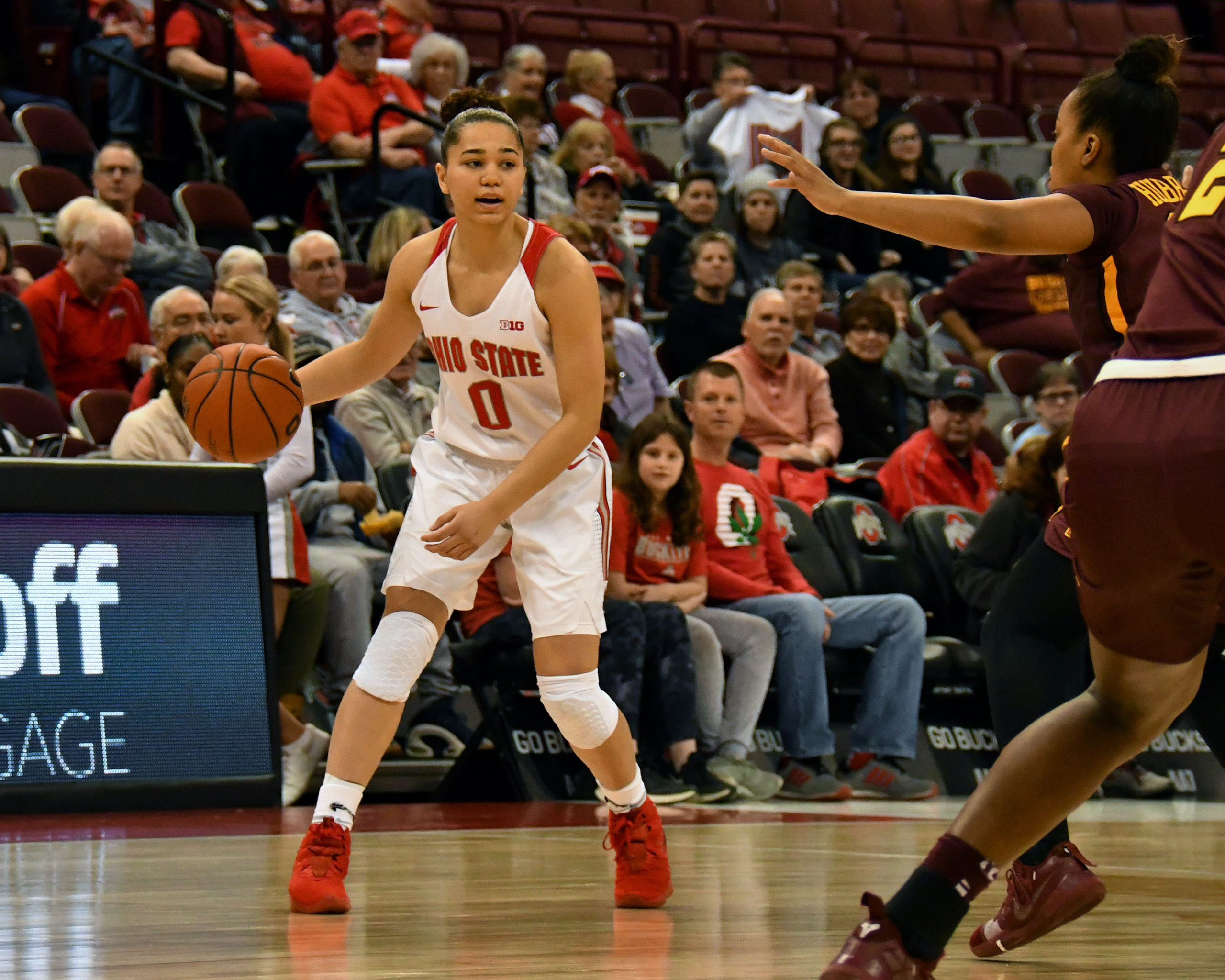 Ohio State battled early on and played some of the best 40 minutes of basketball it has put together this season, dominating Minnesota 99-76, the same team the Buckeyes beat by just three points earlier this year, to get their fourth straight win, the longest win streak for Ohio State this season.

But after taking a 12-point lead into halftime, Minnesota cut the deficit to six, 51-45, following an 8-2 run to open the third quarter. Later on in the quarter, though, freshman guard Madison Greene converted a pair of and-1s to put the Buckeyes back up 12.

The two attempts were part of five and-1 attempts for Greene on the game, a team-high this season. She converted on four of them and ended the game with 25 points, seven assists and zero turnovers.

“She was really great tonight,” Ohio State head coach Kevin McGuff said. “She played aggressively, she took care of the ball, she got other people involved, she scored herself, so just really fun to watch her continue to grow and get better.”

On the five attempts for a three-point play, Greene said it was a little bit of luck, but freshman guard Jacy Sheldon disagreed.

“It was crazy,” Greene said, “I mean I had no control over that.”

“Yeah, you did, are you kidding me?” Sheldon jokingly interjected. “That was all you, what are you talking about?”

Ohio State continued to add to the lead from there, taking a 73-57 lead into the fourth quarter, a lead that would not get any closer the rest of the game.

Freshman guard Kierstan Bell had another strong performance, tallying 15 points and six rebounds in only 14 minutes after not playing in the fourth quarter due to foul trouble. That trouble came with 2:19 in the third quarter when Bell was whistled for a questionable reach-in foul. She then pointed to the Jumbotron and told the ref to watch the play, which proceeded to get her a technical foul.

“You have to remember it’s getting to February now and the refs, they’ve reffed a lot of games this year and so they’re a little worn out,” McGuff said on what he told Bell after the technical foul. “You just have to, regardless of if you agree with the call or not, you just have to keep playing and leave them alone.

“She’s just young and she’s just passionate, she just really wants to do well and so just a great opportunity to learn for her.”

Sophomore forward Dorka Juhasz returned to action after missing the previous game due to a right ankle injury. Juhasz struggled for a lot of the game, and was jumping around and stretching out the ankle much of the time she was on the sidelines.

But she finished strong, making a pair of three pointers early in the fourth quarter to help push the Ohio State lead to 81-59. Juhasz ended the game with eight points and eight rebounds on 3-of-10 shooting.

From there, the Buckeyes cruised, ending with a 23-point victory, the largest against any Big Ten team that was not Illinois, who sits at 2-10 in the conference.

Sheldon said the strong shooting night for the team was a lot in thanks to Greene’s inside presence.

“She created driving lanes, she got shooters open, so that definitely helped,” Sheldon said. “We shot it well tonight, so that helped too, so I think that balance of being able to create those driving lanes and those threes, too, was really helpful for us tonight.”

Sheldon also had a strong outing overall for the Buckeyes, finishing with 19 points on 6-of-8 shooting (3 of 5 from three) and seven rebounds.

The win against the Gophers moves Ohio State up to 15-9 and 8-5 in the Big Ten, good for sole possession of fifth place in the conference.

“I think we’re starting to play really well together and we’re gaining some confidence too,” Sheldon said. “It’s our fourth win, so we really want to keep that going, keep playing together, keep playing really hard, and hopefully we can carry that on.”

Ohio State goes back on the road for a 2 p.m. matchup Sunday against No. 20 Indiana.