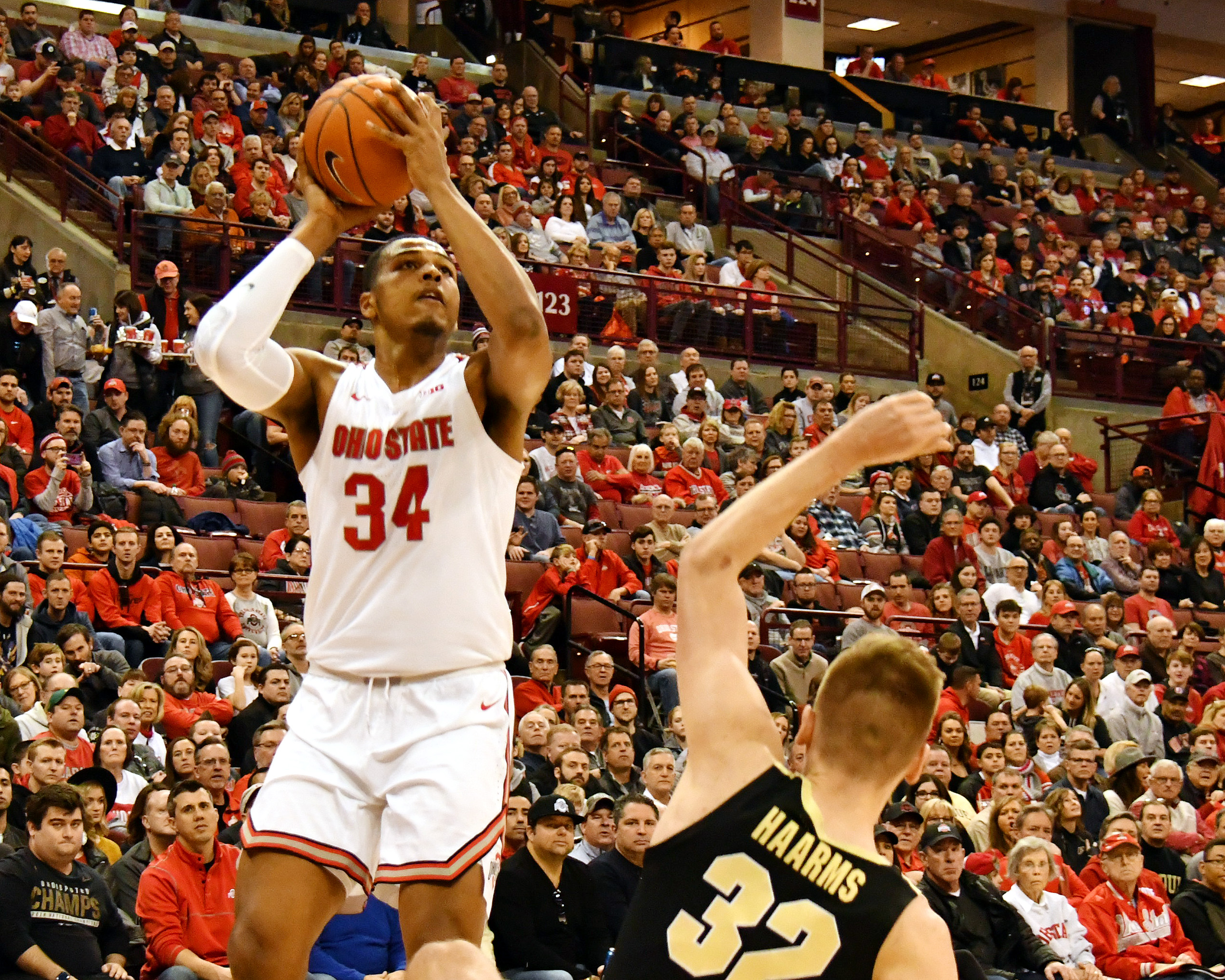 “Just compete, to be honest,” sophomore guard Luther Muhammad said of head coach Chris Holtmann’s message. “We knew it was going to be a fight from start to finish. We had to come out and play hard, play together. And our coach was just hitting on competing, executing and toughness.”

The Buckeyes used a balanced attack to take down the Boilermakers, led by junior forwards Kyle Young and Kaleb Wesson. Young led the team with a career-high 16 points while grabbing seven rebounds, and Kaleb Wesson recorded 13 points with eight boards, four assists and four steals.

“More than anything he impacts the game in ways that are not always on the stat sheet, but today it really was on the stat sheet with his rebounds and his scoring,” Holtmann said of Young. “His activity and his ability to guard different bodies in different positions – he was really good.”

After leading 29-20 at halftime, Ohio State opened the second half on a 7-0 run with a three-pointer by Muhammad sandwiched between layups from Young and Kaleb Wesson.

Purdue used an 8-3 spurt sparked by a three-pointer and and-1 from senior forward Evan Boudreaux to cut Ohio State’s lead to 39-28 with 15:11 to play.

Eleven points was the closest Purdue would get until the Boilermakers ripped off a 6-0 run to cut a 45-30 Buckeye lead to nine points with 10:17 remaining. Kaleb Wesson and Muhammad answered with back-to-back triples, and Kaleb Wesson hit a pair of foul shots to put Ohio State up 53-36.

Boudreaux, who fouled out with a game-high 17 points with 2:15 left, converted another old-fashioned three-point play, but Young responded with the most exciting play of the game. Junior guard C.J. Walker surveyed the floor from the right wing and threw a lob pass to Young, who stuffed home a powerful dunk, igniting the home crowd of 18,809.

“It felt good,” Young said of the slam.” I always like those kind of plays, hype plays, get people going. I probably should have dunked the one coming down the lane on that fastbreak – my teammates were mad at me for that – so I had to get one back.”

In the first half, Kaleb Wesson knocked a three-pointer to start the scoring for Ohio State, which Purdue senior guard Jahaad Proctor answered with a triple of his own. Then the Buckeyes fired off a 7-0 run in under a two-minute span to take a 10-3 lead with 16 minutes until halftime.

The Buckeyes and Boilermakers battled back and forth, with Boudreaux cutting Ohio State’s lead to 16-12 with a rebound putback with 9:42 until the midway intermission.

After Purdue cut their lead to four, the Buckeyes responded with an 8-0 run, where they held the Boilermakers scoreless for 6:15. Proctor converted consecutive buckets followed by a basket by Purdue sophomore forward Trevion Williams in the lane to cut the Ohio State advantage to 24-18 with 2:15 until halftime.

Senior wing Andre Wesson ended a 5:15 scoring drought for Ohio State with a layup with 1:40 left in the first half. The Scarlet and Gray took a 29-20 lead into the break.

Muhammad finished with 11 points on 3 of 5 three-pointers and 2 of 2 free throws, while Andre Wesson contributed eight points and seven rebounds.

“He was great, made shots, took good ones, took clean ones, kind of played off other guys, played really solid,” Holtmann said of Muhammad. “And then impacted the game on the other end. He was as good as maybe he’s been.”

“He made the right play a lot,” Holtmann said of Walker. “Steadiness, solid defense – he was really solid today.”

“I just know we have really, really challenging games coming up,” Holtmann said. “I don’t know outside of Iowa what’s after that, but in this league, they keep coming.”