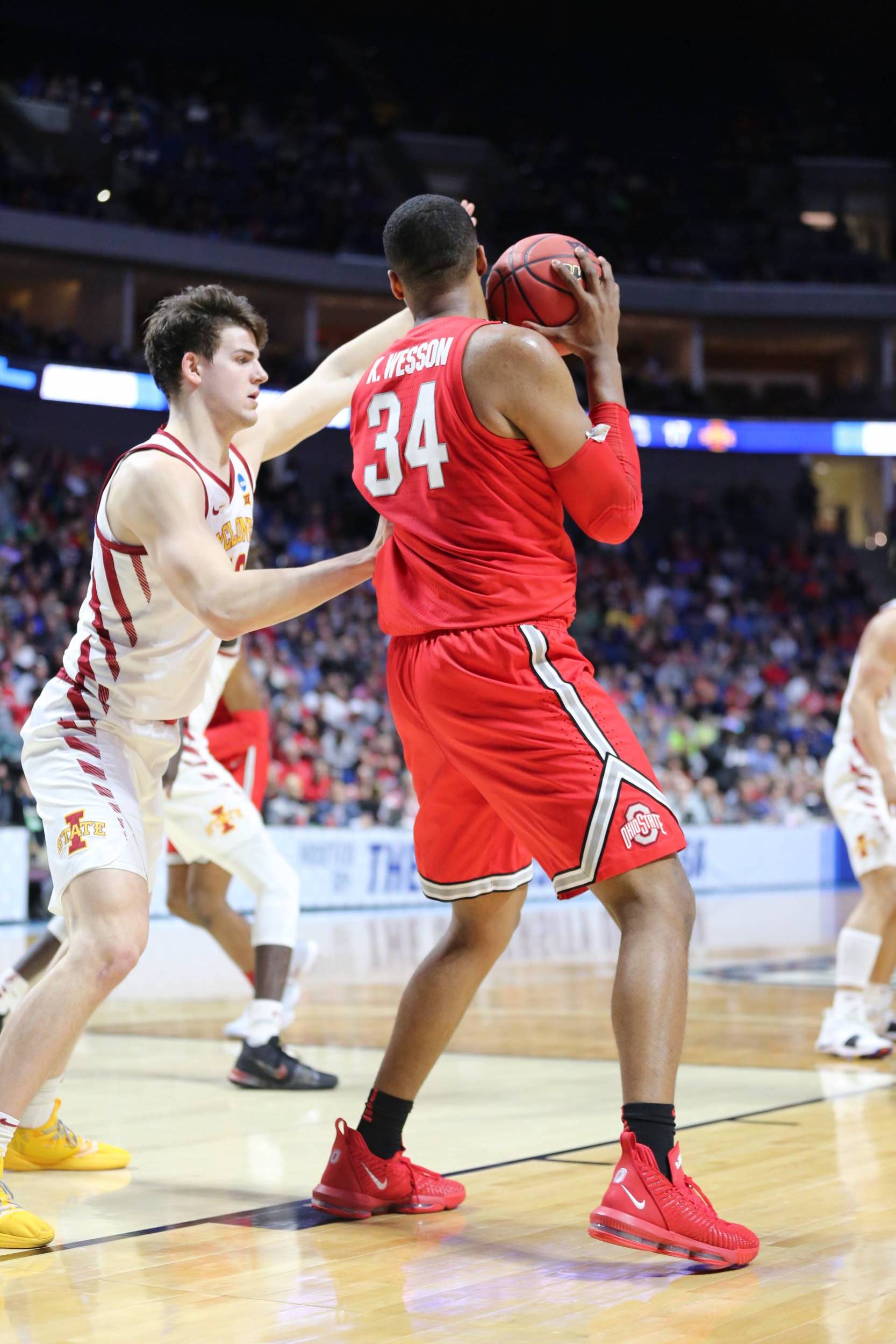 TULSA, Okla. — Kaleb Wesson had 21 points and 12 rebounds and Keyshawn Woods added 19 points when No.11-seed Ohio  State  upset sixth-seed Iowa State 62-59 in the first round of the NCAA Tournament Midwest Regional at BOK Center in Tulsa, Okla., on Friday.

“We’re extremely happy right now,” OSU sophomore Kyle Young said. “It’s good to be in the tournament but you don’t want it to be your last game.”

Wesson credited the Ohio State defense for the victory against a team averaging 77.4 points.

Sophomore Musa Jallow had 11 points for the Buckeyes.

“I think it feels great, obviously,” OSU coach Chris Holtmann said of some questioning the Buckeyes’ being in the tournament with and 8-12 Big Ten record. “You know, you could say it validates the committee’s decision, but we really felt like we had put together a really strong body of work and that our guys had earned it.

“I think that you’re always concerned when you’re in a situation where it’s, you’re on potentially that cut line, but we really did feel like our guys earned it. We knew we had a tremendous challenge.”

The crowd of 12,443 was about 75 percent for the Cyclones. Ames, Iowa, is a 496-mile drive to Tulsa, about the same trip for the Houston backers. Its 811 miles to Tulsa from Columbus.

The Buckeyes were up 44-38 when Wigginton made a three-pointer from the right corner while being fouled by sophomore Kyle Young and made the free throw for a 44-42 score with 11:41 left in the game. Kaleb Wesson countered with an old-fashioned three off an offensive rebound 30 seconds later. Junior Andre Wesson followed with a bucket underneath via a pass from Young to make it 49-42.

Later, the Buckeyes got three offensive rebounds on one possession, Kaleb Wesson made a two foul shots and OSU led 53-50 with 4:35 left.

A Shayok jumper for his 23rd points gave Iowa State its first lead of the second half, 54-53, with 3:37 left but Woods regained the lead by a point on a bucket.

The Buckeyes missed three shots on their first trip down the court then heated up to take an 11-2 lead thanks to an 9-0 run Jallow canning a pair of jumpers.

Iowa State then went cold, missing six straight in a four-minute span that allowed consecutive field goals by Kaleb Wesson to tie the score at 17.

The Cyclones had to rely on  free throws to stay in the game because they missed their next four from the floor as well for the Buckeyes to go up 25-20 with 3:38 left in the half.

OSU went ahead despite Kaleb Wesson going to the bench with his second foul with 6:31 left.  Wigginton made a pair of foul shots on the Wesson foul to make it 20-20 but the Buckeyes responded without their center.

Freshman Duane Washington Jr. made one of two free throws to make it 26-20 with 3:18 remaining but that was it for the OSU scoring in the half. Shayok ended the Cyclones’ 0-11 drought with a trey with 1:27 to go and Wigginton added a free throw.