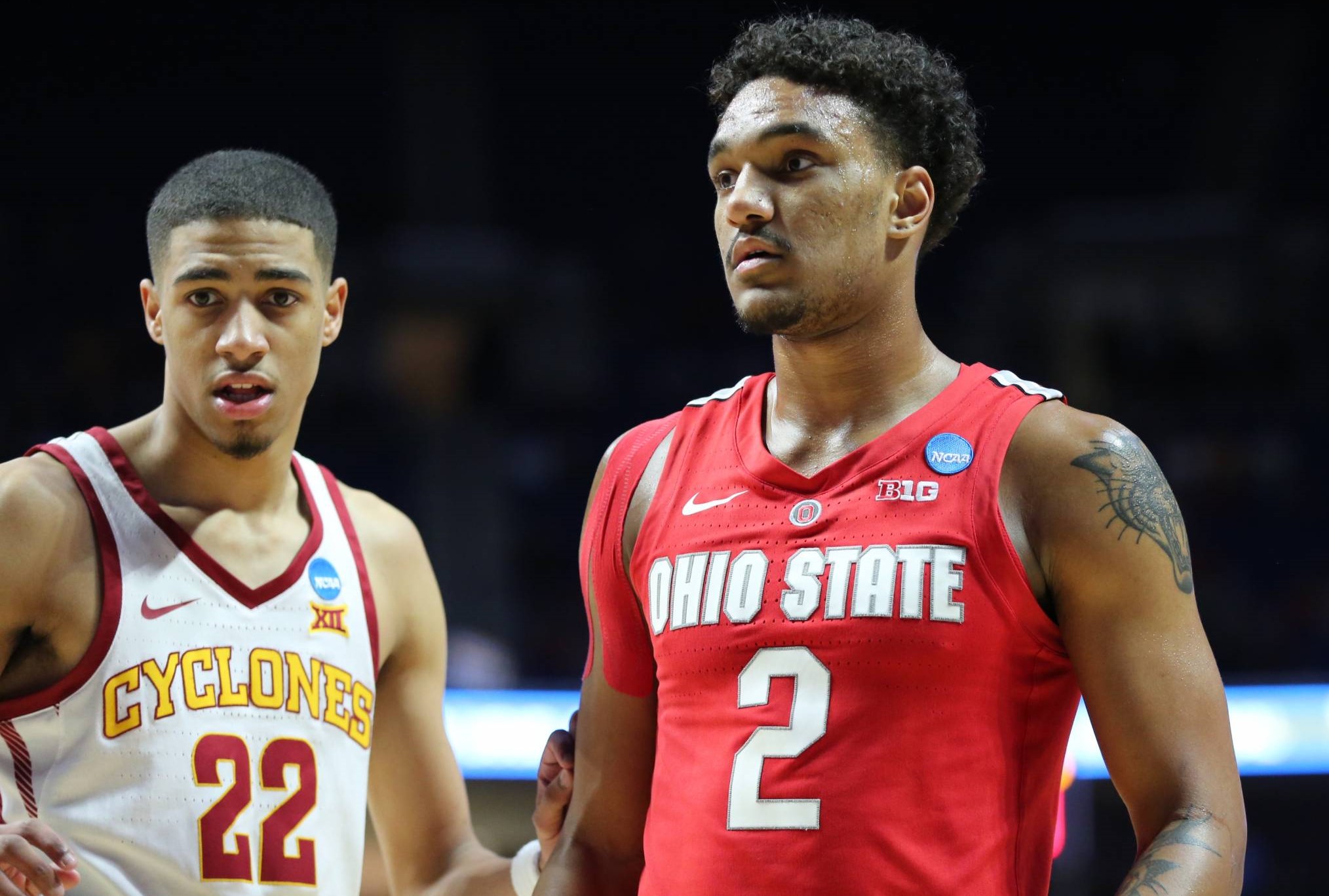 TULSA, Okla. — Defense was the talk post game for Ohio State after the 11-seeed Buckeyes defeated sixth-seed Iowa State 62-59 in the first round of the NCAA Tournament Midwest Regional at BOK Center in Tulsa, Okla., on Friday.

The Cyclones (23-12) averaged 77.4 points per game and the Big 12 Tournament champions had four players who averaged double figures in scoring and another was just below 10.

While Iowa State shot 43.4 percent (23 for 53) for the game, the Buckeyes (20-14)  got the stops when needed. Included was a stretch in the first half when the Cyclones missed 11 straight shots, a big reason the Buckeyes carried a 26-24 lead into the break.

Then there was the play that OSU coach Chris Holtmann called the most important defensively in the game. Iowa State had just taken it’s first lead of the second half, 54-53, when OSU graduate transfer Keyshawn Woods put the Buckeyes ahead 55-54.

On Iowa State’s next possession, sophomore Musa Jallow stole the ball from leading scorer Marial Shayok (23 points) and was fouled. OSU was not in the bonus and the Buckeyes went down the court, and after another foul, this on committed on sophomore Kaleb Wesson, Woods followed with a  three-pointer and 58-54 lead with 2:44 to play.

“His steal late was a momentum changer for us,” Holtmann said of Jallow.

Jallow said he all the video work leading to the game paid off.

“They pretty much ran that stagger screen the whole game,” he said. “After a while you pick up on it and I just took it.

“Everybody knuckled down. We worked on defense every single day in practice. Throughout the whole year it prepared us and the Big Ten prepared us.”

Holtmann said he gave the team some words of advice after the March 17 NCAA selection show.

“I didn’t think we would win if we didn’t. I think it was our best. To come here and play as well defensively as we played, our guys were tremendous. Our guys  and their responsibilities terms of game plan were tremendous.

“We know they’re an explosive offensive team. They were going to take shots just we tried to make them tough shots, take tough twos,” he said. “We slowed them down a little bit, throwing the ball inside, playing inside-outside.”

OSU didn’t make a field goal after Woods’ basket but two free throws by Wesson and two more from Woods with 18 seconds left were the last points of the game.

“That’s a dream everyone thinks about,” Woods said. “You want to ice the game, have it on your back. Be the man and seal the deal. Ever since I was a little kid.”

He, too, lauded the defensive effort.

“I’d say this one of our top defensive games if  I had to rank this,” Woods said. “Even when we couldn’t score late, we were still able to get stops.”

The Buckeyes are in the round of 32 for the second straight season and will play No. 3-seed Houston (32-3) on Sunday at 8:40 pm. with the winner advancing to the Sweet 16 in Kansas City.

“Our preparation is everything. We’ve got to be dialed in from the get-go,” he said. “As long as all of us are dialed in and we’re determined to guard, we’ll get results like this tonight and that’s how it’s got to be, especially coming in Sunday playing a team like Houston.”