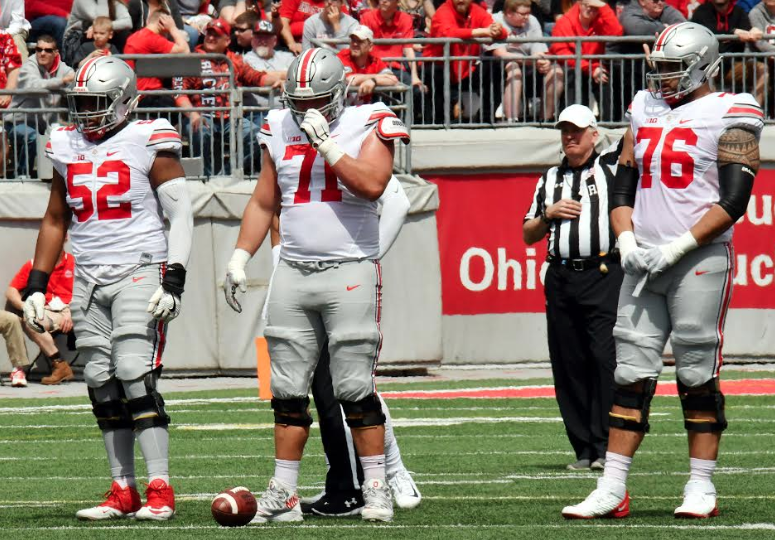 When the first-team offense broke from its huddle and spread out five linemen, the newest look in the trenches featured a veteran at a new spot.

While the Buckeyes worked through 14 practices of spring camp without a 2018 starter and a pair of 2019 arrivals, fifth-year senior Branden Bowen filled the void at left guard in the scrimmage finale.

According to Myers, the latest move in OSU’s musical chairs along the offensive line was a rather recent installation.

“At left guard, not long this spring,” Myers said. “But Bowen is one of those guys, he’s so smart and knows so much about the offense that he can bump anywhere on the offensive line — it really doesn’t matter — and that’s honestly a huge help. His versatility has been a huge help for us this spring. He’s been all over the place.”

The 6-7, 315-pounder was Ohio State’s right guard as a sophomore in 2017 — before he broke his left leg during the Buckeyes’ sixth game of the season — and returned to the original interior position throughout spring camp.

“(Bowen) is so versatile,” Davis said. “He can play any position. The only position I’ve never seen him play is center.”

“I think that the offensive line — we have four guys to replace there,” Day said. “And so that’s something that is probably the least experienced. … Thayer didn’t play in the spring, so how’s that all going to look when we get into the preseason? We do have some guys coming in which is good — the calvary coming — which is important.”

In the meantime, Bowen at left guard holds Ohio State’s first-team offensive line over until Jackson and Miller step foot on campus for good.

“I know when I was out, he filled in at the right guard spot,” Davis, who missed time near the end of the spring with a virus, said of Bowen. “He was playing right tackle, left guard and left tackle. Having a guy like that is a huge part of our offensive line because if someone goes down, he’ll be the first guy up to say, ‘Hey, I could go in there.’ And not just go in and do OK — he can go in there and do a good job. So he’s super versatile and someone I truly respect.”