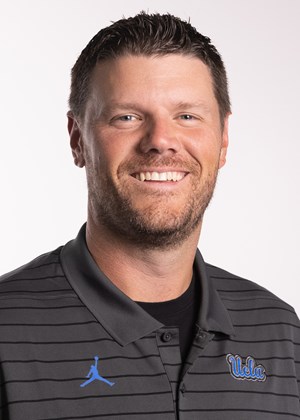 Ohio State has picked UCLA offensive coordinator and offensive line coach Justin Frye as its replacement for Greg Studrawa, who was fired after a tumultuous season on Jan. 6.

Frye, like Buckeye head man Ryan Day, is a product of the Chip Kelly tree, working under Kelly in Westwood at UCLA since 2018. He was hired as the offensive line coach and remained in that role, but also filled the offensive coordinator slot since the end of the 2018 campaign – though Kelly famously calls his own plays and has quite a bit of influence on the Bruin offense.

The connections between Day and his new OL coach go deeper. Both served as graduate assistants at Florida under Urban Meyer (Day in 2005, Frye in 2009-10) and in turn, both joined Steve Addazio’s staff at Temple. Frye worked as Addazio’s offensive line coach for two seasons at Temple in 2011 and 2012, and then traveled with Addazio and Day to Boston College, working as the offensive line coach for the Eagles from 2013-17. He coordinated the running game as well.

At UCLA, Frye helped to build one of the nation’s best rushing attacks this season. The Bruins averaged 215.1 yards per game on the ground, good for 17th nationally. UCLA led the league in scoring with 36.5 points per game and Zach Charbonnet became Frye’s seventh rusher to finish in the top 30 nationally for total rushing yards. The UCLA rushing attack was even better in 2020, gaining 230.6 yards per game, enough for the No. 12 spot nationally.

Perhaps his best season came in 2013 when his line helped to guide the way for Heisman finalist Andre Williams at Boston College. Williams rushed for 2,177 yards, the fifth-most in a single season in NCAA history.

Frye played offensive tackle for Indiana from 2002-06, setting the school record for consecutive starts by an offensive lineman with 45.