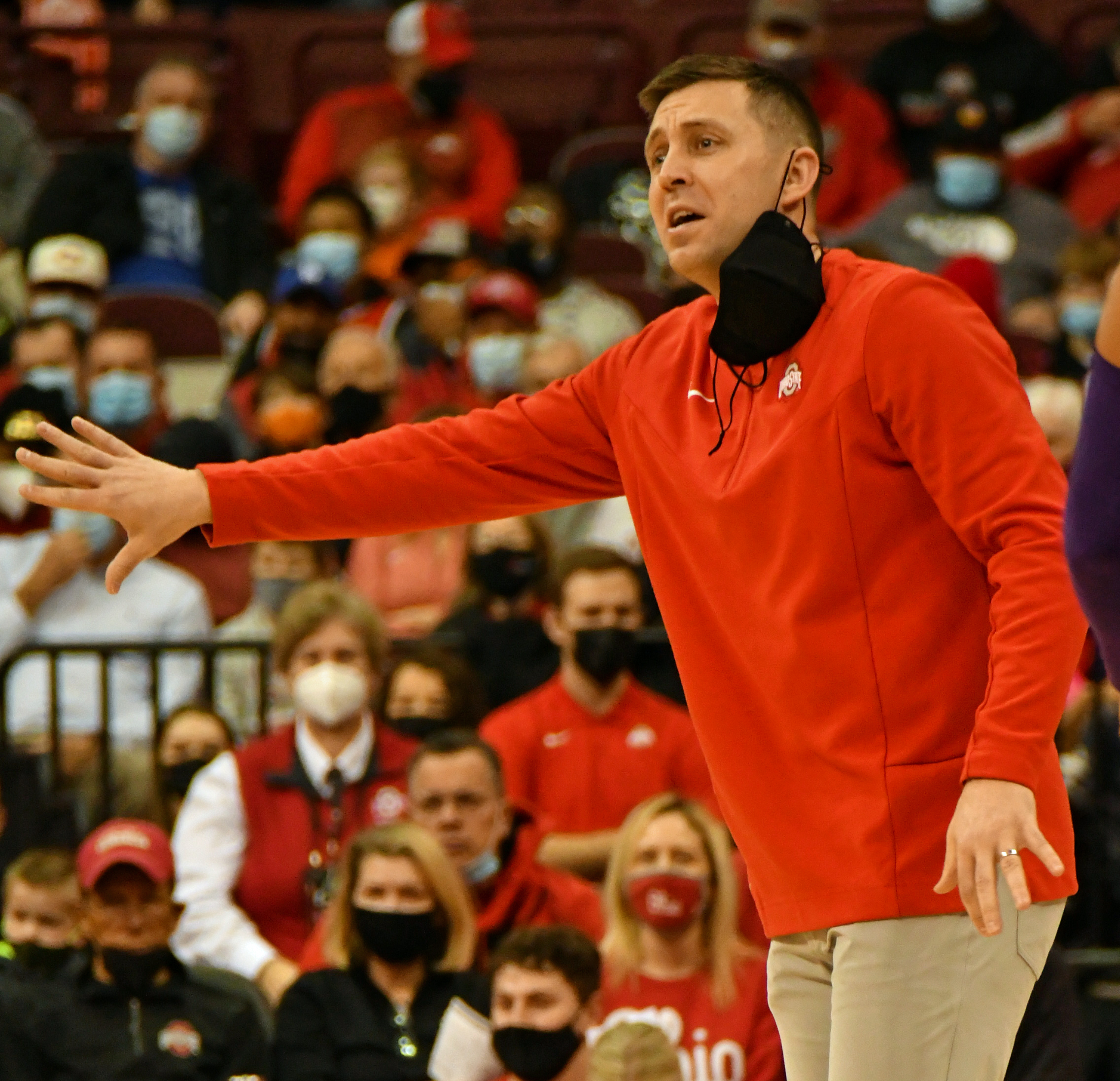 Jake Diebler couldn’t have asked for a much better start to his tenure as Ohio State’s head coach. Filling in for Holtmann and assistant Ryan Pedon, who missed the game because of COVID protocols, Diebler claimed victory in his first career game as acting head coach, with the Buckeyes (10-3, 4-1) scoring early and often to pull away from Northwestern (8-5, 1-3), 95-87.

It was E.J. Liddell, who had struggled in his first two games back from a lengthy COVID pause that forced him to isolate for 10 days, who led Ohio State to its fourth league win in five tries. The junior forward scored 34points on the game, with Northwestern completely unable to find an answer for him inside or outside of the key. He rattled off 17 of Ohio State’s first 19 points, knocking down five 3-pointers and all six of his shots overall.

He finished the half with 21 points on 8-of-11 shooting as Ohio State rocketed out to a 51-39 lead at the break – the new high-water mark for the Buckeyes in a first half this season, edging a 42-point outburst against Niagara.

The game nearly got out of hand early for the Wildcats, thanks in large part to the barrage of Buckeye shots from downtown. When Northwestern shifted to focus on Liddell defensively out of the first break of the game, Ohio State found both Malaki Branham and Meechie Johnson Jr. for triples of their own, pushing the lead to 15 points at 29-14 and forcing a Northwestern timeout with more than 12 minutes to play in the first frame.

A quick 10-2 Northwestern run cut into the Ohio State lead, but a Cedric Russell 3-pointer and a pair of Kyle Young foul shots put that to an end and put the Buckeyes back up 36-24 just out of the under-eight-minute timeout.

The two traded buckets down the stretch to enter the break, with Ohio State shooting a white-hot 66.7 percent from the field. However, eight turnovers, which the Wildcats converted into 11 points, kept Northwestern in the game.

Liddell started the second half as he ended the first, with a bucket, but Northwestern again found a run to put pressure on the Buckeye lead. Amid a stretch that included a trio of Buckeye turnovers and three missed shots from downtown, Northwestern’s Ty Berry found eight points to spark a 12-2 run, cutting the OSU lead down to just four, 55-51, the smallest deficit since 13-9 at the 15:47-mark of the first half.

And as it did after the run in the middle of the first half that cut Ohio State’s 29-14 lead in half, Ohio State had a response ready. Branham snapped a nearly three-minute scoring drought with a jumper, and Zed Key added one of his own to push the lead back to eight points.

Behind more hot shooting from Berry and Chase Audige, Northwestern would get back within two scores at 61-56, but never closer as Ohio State rattled off a quick seven points, capped by another Russell 3-pointer, to push the lead back into double digits.

The two squads would again trade baskets down the stretch on the way to Ohio State’s seventh straight home win of the season, where it has yet to lose this season and where it hasn’t dropped a game in front of fans since Jan. 23, 2020 against Minnesota (COVID restrictions kept fans out of Value City Arena in the 2020-21 season).

Liddell led all scorers, while Branham added in 24. Audige, Berry and Pete Nance led the Wildcats with 23, 20 and 20 points respectively. Jamari Wheeler’s eight rebounds led all Buckeyes, as did his six assists and four steals.