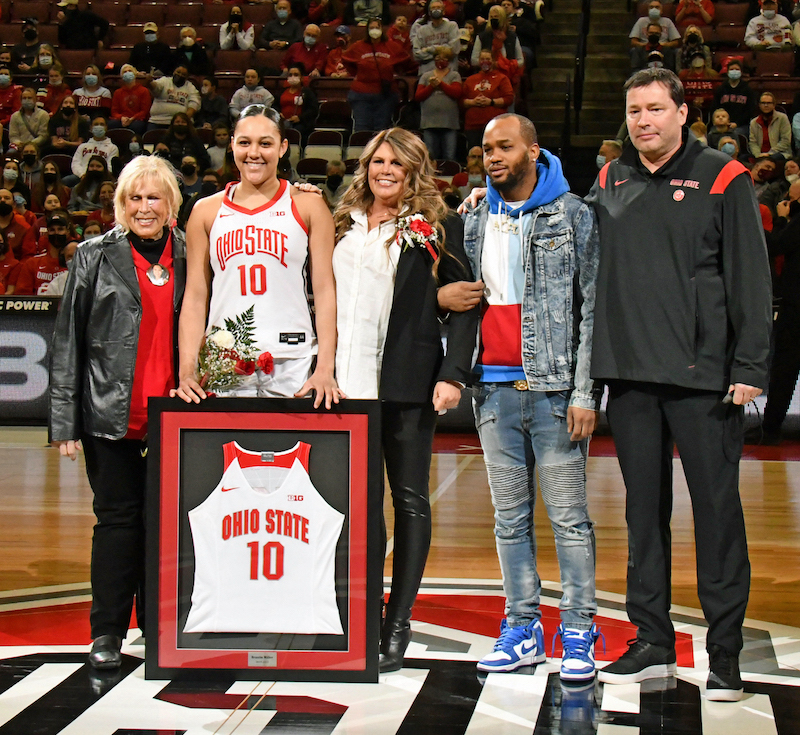 Given the dominant start, the Buckeyes appeared primed for a big lead at the end of the first, but the Badgers knocked down two triples in just eight seconds after a turnover by Ohio State and instead led just 16-15.

The short-lived Badger rebellion did not last, however, as the Buckeyes opened the second quarter on a 9-0 run that lasted over four minutes to take a 25-15 lead, the highlight of which was a feed inside from senior guard Taylor Mikesell to Sheldon in which she scored despite being fouled.

Ohio State continued making things difficult for Wisconsin on the offensive end, holding the Badgers to just seven points for the remainder of the quarter. After a miss from Mikesell with just 10 seconds remaining in the half, sophomore guard Rikki Harris intercepted Wisconsin forward Tara Stauffacher’s pass down the court, and graduate forward Tanaya Beacham scored at the buzzer to give the Buckeyes a 32-22 lead at the half.

The lead for Ohio State came in spite of its 3-point shooting, of which the Buckeyes were just 1 of 8 in the first half. Mikesell took seven of those shots, connecting on just one, while the Badgers were 3 of 9 from deep.

The Buckeyes, even without the deep threat, continued dominating in the third quarter, beginning the frame on a 14-0 run to lead 46-24 with 5:16 remaining. Ohio State was 7 of 9 from the field during that run, forcing five turnovers by the Badgers.

Ohio State scored just five points in the final five minutes of the frame but also held Wisconsin to just seven total points in the quarter to lead 51-29 heading into the fourth.

The Buckeyes added eight points in the fourth for their 59-42 win as three – Sheldon, junior forward Rebeka Mikulasikova and Beacham – all hit double figures. Sheldon led all scorers with 19 on 9-of-13 shooting, and Beacham, Harris and Miller all had seven rebounds.

Of Ohio State’s 59 points, 22 came off of turnovers, of which the Buckeyes forced 18 and had seven steals.

Ohio State will stay home to take on Penn State on Feb. 24, with the tip set for 6 p.m. The game can be watched on Big Ten Network Plus.