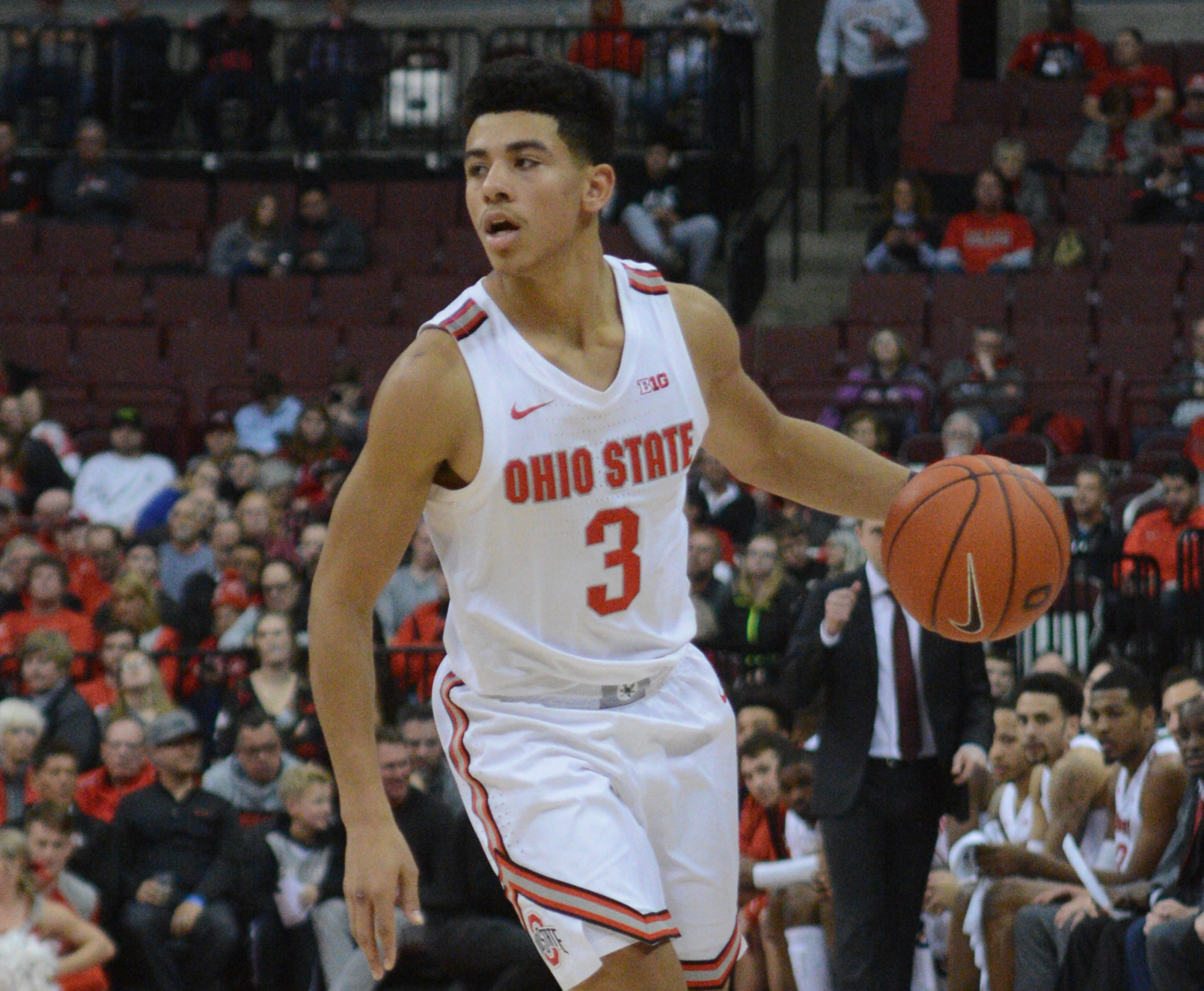 The No. 11 Buckeyes suffered their third straight loss 67-55 against No. 12 Maryland in front of 16,192 fans at the Xfinity Center in College Park, Md.

“It was one of those games where we just struggled making shots,” Ohio State head coach Chris Holtmann said. “That’s the biggest thing coming from this game. We had some decent looks by some guys and some clean threes that we’ll make. We just did not make them tonight.”

Freshman guard DJ Carton made his first career start with junior guard CJ Walker being limited to due to illness, and played well, scoring 14 points and dishing three assists.

Andre Wesson trimmed Maryland’s lead to two with a layup on a dish from his brother Kaleb just 1:44 into the second half. Less than a minute later, Holtmann was hit with a technical foul and an ensuing layup pushed the Terrapins lead to seven.

After Andre Wesson’s triple, Ohio State did not make another field goal for nearly six minutes, with a pair of foul shots from Kaleb Wesson and a technical free throw by sophomore guard Duane Washington keeping the visitors within reach.

“We had a stretch there where they had three or four empty possessions,” Holtmann said, “but we could not get enough conversion at the other end where we could get it down to a one-possession game.”

The Terrapins were able to hold off the Buckeyes at home, keeping their lead at seven or more points and extending their perfect start to the season in the Xfinity Center.

“They’re really good,” Holtmann said of the Terrapins. “They’re length provides, obviously, a lot of problems, and it’s not just the length inside – obviously, Jalen Smith. And (Maryland head coach) Mark (Turgeon) does a really good job. They’re disciplined, hey don’t foul. I’ve always felt like Mark’s teams are really smart in how they defend you. Even their young guys make a lot of smart plays. He’s got terrific length, but he and his coaching staff deserve some credit for that.”

Ohio State opened the game on an 8-0 run with back-to-back three-pointers by Kaleb and Andre Wesson on Carton assists and a Kaleb Wesson bucket in the paint.

“We did make a couple threes in that stretch and we defended them well,” Holtmann said. “They have some lulls in their offense, too. As gifted as they are, they have some stretches where they can struggle to score. We were able to jump out to a little bit of a lead there early.”

Maryland scored its first point on a free throw by Maryland sophomore guard Eric Ayala at 14:33 and did not hit a field goal until a three-pointer by sophomore forward Jalen Smith six minutes into the game.

The Terrapins recovered from the slow start with a 12-3 run to take a one-point lead over the Buckeyes, led by six points from Ayala.

The Big Ten opponents battled through an ugly first half, which reared its head during a 32-second stretch where Ohio State committed three turnovers and Maryland gave it back twice in a two-point game. The Buckeyes did not commit a turnover in the game’s first 8:26, then gifted the Terps with eight free possessions in the next 6:19.

Carton made back-to-back layups between a pair of foul shots from Maryland senior guard Anthony Cowan before Smith and Cowan knocked down consecutive triples to push the lead to eight points.

Carton connected on his first three-pointer of the game, but the Terps answered quickly on a three by freshman forward Donta Scott from Ayala, marking his fourth first-half assist, and third in as many possessions.

Holtmann liked what he saw out of Carton in his first start at Ohio State, filling in for the typical starter Walker.

“He was really sick yesterday, so that was the reason that DJ started,” Holtmann said of Walker. “Eventually we’ll go back to our traditional lineup, we’ll see. I like the idea of DJ seeing the game a little bit. He did some great things tonight, particularly after that first stint. He came back in and was aggressive and ran the team well in a game like this.”

Junior forward Kyle Young missed his second straight game while continuing to recover from an appendectomy. The Buckeyes will need to get back on track Saturday, Jan. 11 at Indiana.