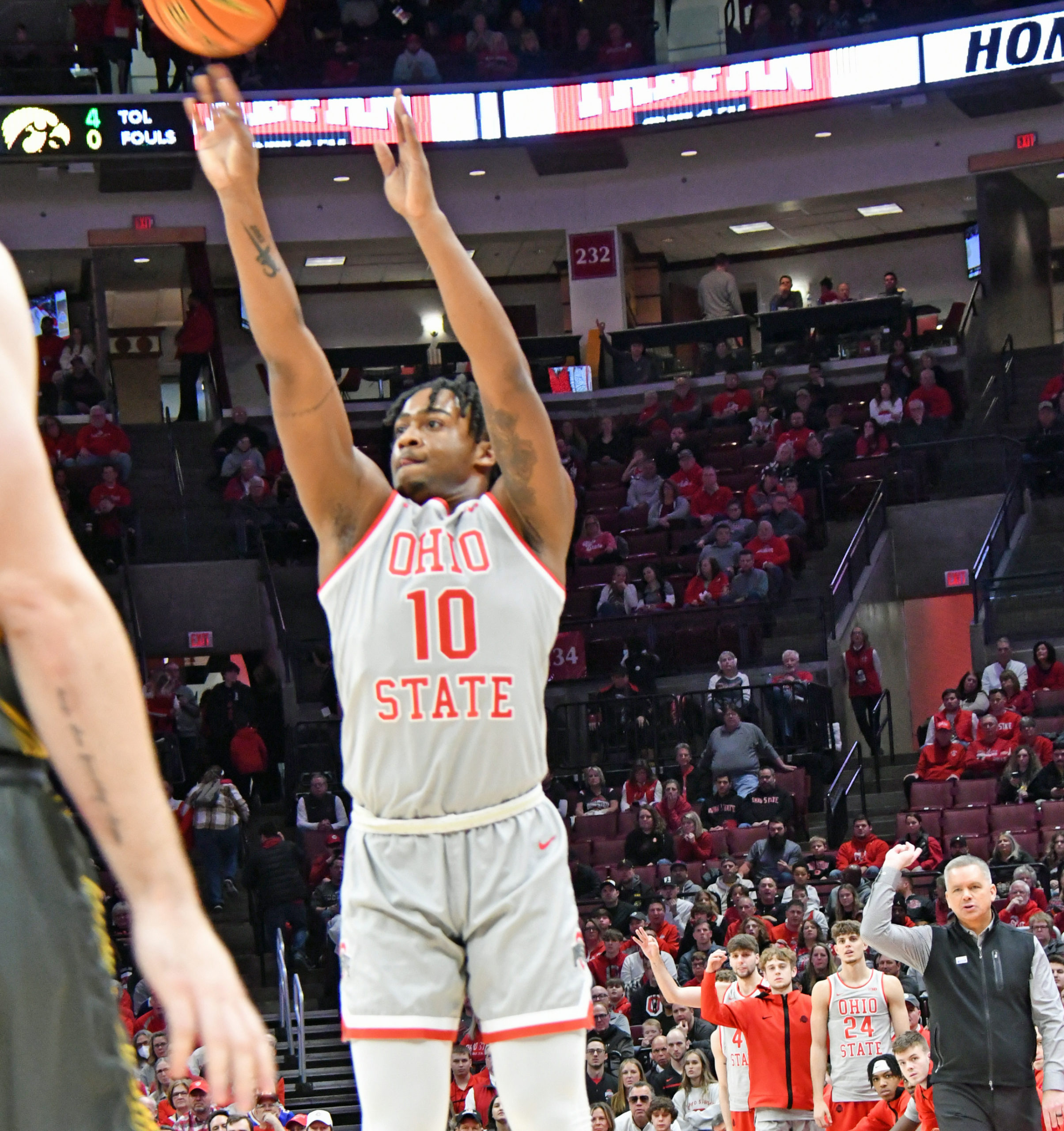 Sensabaugh scored Ohio State’s first five points of the contest, but the Hawkeyes sandwiched an 8-0 run between his buckets. The Buckeyes connected on just two of their first seven shots, both of which came from Sensabaugh, and Iowa held an 11-5 lead with 15:30 to play in the opening half.

However, the Buckeyes caught fire from there, ripping off a 20-4 run across the next 6:15, to pull ahead 25-15 with 9:15 remaining in the frame. The stretch was highlighted by a pair of devastating blocks from center Felix Okpara, one of which set up a transition three-pointer for guard Sean McNeil — who sunk a pair of threes during the run.

Ohio State’s lead grew to as much as 11, with the Buckeyes holding a 28-17 advantage following a three-pointer from Justice Sueing with 8:25 left in the half. But, Iowa outscored Ohio State 18-9 across the final 8:25 in the frame, to pull within two, 37-35, at halftime. Both teams endured scoring droughts of more than three minutes to close the frame.

Both teams showed their prowess from beyond the arc in the first half, as Ohio State shot 54.5 percent (6 of 11) from deep while Iowa found twine on four of nine attempts (44.4 percent).

After Iowa guard Ahron Ulis tied the game with a jumper less than 15 seconds into the second half, Ohio State embarked on a 12-2 run — sparked by six points from Sensabaugh — to put the Buckeyes ahead 49-39 with 15:53 to play.

Ohio State connected on 11 of its first 15 field goal attempts to start the second half, scoring 25 points in the first 8:48 of the frame. However, the Hawkeyes still remained in striking distance, trailing 62-52 entering the under-12 timeout.

The Buckeyes held the Hawkeyes at arm’s length until the under-8 timeout, maintaining a 10-point lead, 71-61, with 7:35 to play despite Iowa star forward Kris Murray dropping 11 points across the first 12:25 of the frame.

Guard Isaac Likekele produced a double-double with 18 points — his most since joining Ohio State as a transfer this season — to go along with 10 rebounds and seven assists while Sueing added 10 points on 4-of-9 shooting after coming off of the bench for the first time this season. Guard Roddy Gayle Jr. registered his first career start, finishing with 9 points — including an emphatic two-handed dunk over a pair of Hawkeye defenders during the second half.

Murray led the Hawkeyes with 22 points on 9-of-19 shooting while adding seven rebounds and four assists. Forward Filip Rebraca and Ulis supported Murray with 15 and 12 points, respectively.

Not only did Ohio State’s win snap its own losing streak, but it also put Iowa’s four-game winning streak to an end.

Ohio State heads back on the road on Tuesday for a battle with Illinois in Champaign, Ill., with tip-off set for 7 p.m. The game will be televised on ESPN.