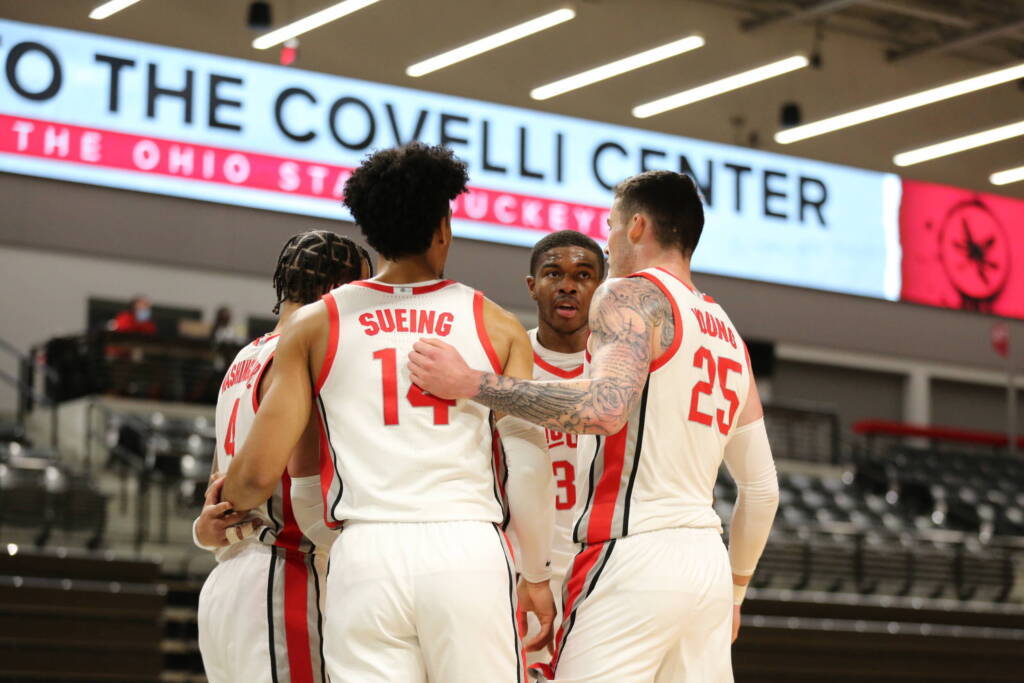 Ohio State overcame a five-point deficit in the second half to defeat UMass Lowell 74-64 at the Covelli Center on Nov. 29.

The Buckeyes entered its matchup with UMass Lowell as massive favorites, but the River Hawks brought its brand of excellent perimeter shooting and sound team basketball to Columbus.

Junior guard Duane Washington led the Scarlet and Gray with 21 points, while Walker added 13 points and five assists in a 10-point win.

After the heavily favored Buckeyes went up 56-51 with 7:33 to play, the visiting River Hawks ripped off five straight points to tie the game with 6:46 remaining.

Washington answered the River Hawk run with a three-pointer on a friendly roll around the rim, but UMass Lowell senior guard Obadiah Noel responded with the equalizer from deep out of a timeout.

Walker hit a clutch shot with 2:30 left to push the lead to 65-61, but Noel cut it to two with a jumper of his own on the ensuing possession. Sueing extended the lead to four with a pair of free throws, and Washington hit the dagger from deep after a 2-for-10 start from beyond the arc.

“I got some good looks during the game and unfortunately, they didn’t go down. But the saying is, ‘shooters shoot,’ and you’ve still got to be confident in yourself,” Washington said. “And I believed in myself, and I let it fly with confidence and put it in, so credit to C.J. for making a good pass.”

After a lackluster first half, Ohio State picked up its defensive intensity to open the second half, but UMass Lowell continued to play extremely hard and knockdown shots from deep. The River Hawks took five-point leads on two separate three-pointers in the second half, leading 41-36 four minutes into the frame, and 50-45 with just over 11 minutes left.

Sueing drilled a three-pointer to cut the River Hawk lead to 50-48. After Noel split a pair of free throws on Liddell’s fourth foul with 10:36 left, Ohio State ripped off an 8-0 streak. The Buckeyes hit 6 of 8 foul shots with a Washington jumper on that run.

Ohio State jumped out to an 8-2 lead across the game’s first 3:45, appearing to be ready to roll to another blowout win with an 8-0 spurt after UMass Lowell scored first.

After the River Hawks cut the Buckeye lead to 8-6 with more than 15 minutes until halftime, Ohio State freshman center Zed Key fired off a 6-0 run by himself. Key finished with eight points, four rebounds and two blocks.

“E.J. was in foul trouble today, so (Key) brought a lot,” Walker said of Key. “Offensively, he finished under the rim, got some great defensive rebounds that we needed when we got stops, and he just brings a lot of attention under the basket for us to make plays, like me, Duane and Justice, being able to get downhill.”

The Buckeyes and River Hawks battled back and forth until senior forward Kyle Young extended the lead to 21-13, marking the biggest advantage of the first half. Strong defensive effort and solid three-point shooting helped UMass Lowell tie the game at 33 heading into halftime.

The River Hawks’ stringent defense held Ohio State to 34-percent shooting and 0 for 8 on three-pointers across the game’s first 20 minutes. Meanwhile, the visitors shot 40 percent (6 of 15) from beyond the arc in the first half.

“We were able to get just enough stops there late, and our execution late against their zone got a little bit better, and Duane was able to make that three that created some separation. But I think (our defense) has to be a staple for us,” Holtmann said. “We’ll shoot it better than we have these first two games, there’s no question about that. But our defense has to sustain us.”

For four free issues of the print edition of Buckeye Sports Bulletin, no card required, sign up at the link here http://www.buckeyesports.com/subscribe-4issue-trial/