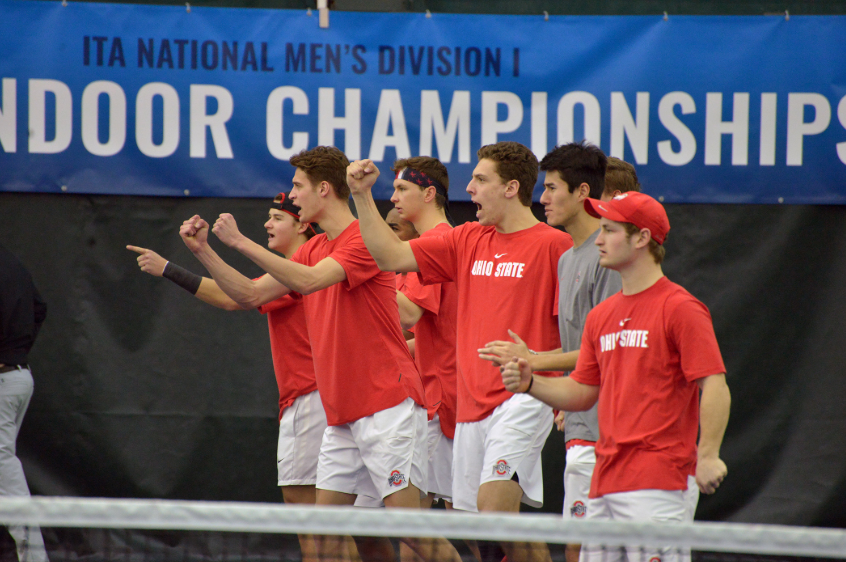 For the second time in the past five years, the Ohio State is atop the men’s tennis landscape at the end of the winter season. The Buckeyes capped their dominant weekend Monday when they won 4-2 over Wake Forest and took the ITA Indoor Team National Championship.

No. 2 OSU remained perfect at 13-0 on the campaign. Ohio State last captured the indoor title when the Buckeyes beat Southern California 4-1 on Feb. 17, 2014.

The championship action at Midtown Athletic Club in Chicago began when the Buckeyes claimed the doubles point and led 1-0 to start the match against the Demon Deacons. OSU’s duo of juniors Alex Kobelt and Kyle Seelig won 6-1 over Wake Forest’s Bar Botzer and Petros Chrysochos before junior JJ Wolf and senior Martin Joyce lost 6-3 to Bona Gojo and Alan Gadjiev, but senior Hunter Tubert and sophomore John McNally came through 7-6 (7-3) against Siddhant Banthia and Julian Zlobinsky.

Singles started with Wolf’s 6-0, 6-3 rout of Goho for Ohio State’s second match point. Kobelt followed soon after with a 6-3, 6-3 win over Yuvel Solomon, putting the Buckeyes up 3-0 and one point away from the match victory.

But Seelig fell 6-2, 6-3 to Bozer and Tubert lost 6-2, 2-6, 6-3 against Banthia as OSU’s led the match by one point at 3-2. Ohio State held its breath with Joyce and McNally each battling ahead until Joyce won 7-5, 7-5 over Melios Esftathiou and sealed the 4-2 match victory against the Demon Deacons.

“Marty Joyce is a captain and he’s been with us, and he’s supposed to close it out,” Tucker said. “Obviously, we blinked a little bit. I talked about it (Sunday) when I was interviewed by the ITA. The difference with college tennis is guys struggled a whole break throughout a set. We had commanding leads on courts two, four and six, up at set — everywhere.

“We flinched a little bit, blinked a little bit and gave it back, but Marty Joyce was able to step up big, big serve and captain. That’s what you want. You want your captains on the court. Hunter Tubert had a 3-1 lead late in the third set and (Banthia) stepped up and played well, but we felt pretty good having our captains on the court at the end.”

While the Buckeyes enjoy the triumph, they have a quick turnaround with their next match Wednesday at 2 p.m. in Columbus vs. Kentucky (6-4). OSU gets four days off before Sunday when Notre Dame (8-4) comes to campus for a noon start.

“Obviously, it feels good,” Tucker said. “But I’ve got to be honest with you, we’ve got to get back home at we’ve got to play Wednesday at 2 or 3 p.m. against Kentucky. There’s no rest. Notre Dame’s coming in on Sunday and, obviously, they were here in this tournament. So we’re in the middle of the season. It’s nice, but the season isn’t over and we’ve got to keep getting better.

“But for the work they’ve put in and everything that we’ve been through so far, for them to hang on to a big trophy on the way home is what we were looking for.”