Ohio State Learns From Closed Scrimmage Ahead of Sunday Exhibition 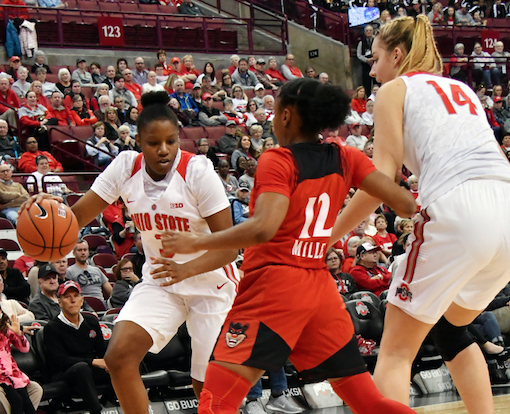 With seven freshmen new to the team, Ohio State’s closed scrimmage against Eastern Michigan last Sunday was head coach Kevin McGuff’s first look at his group against any sort of competition.

He said he left the game with plenty of places for the team to improve moving forward.

“We did some great things, had some clear things we need to work on. I think the good news was most of the things I think we have to work on are mostly fixable, and they can be fixed pretty quickly if we just commit to it and focus,” McGuff said. “It was really good because with so many freshmen you can talk to them, you can tell them, you can demonstrate in practice but until they actually get in a game and see like ‘Oh, that’s what you’re talking about,’ it really might not sit home the way you want.”

It may have taken that game experience for the first-year players to get a taste of what is to come this season, but for the sophomore trio of Dorka Juhasz, Aaliyah Patty and Janai Crooms, all of which made major contributions a season ago, they have been through this preseason before.

But all of them agreed that this season has felt different than the year prior, with a change from graduate transfers into young, unproven talent.

“Practices have been very different, just with the energy,” Crooms said. “We have such a young group, but really, really talented group. I feel like we’re more talented this year.”

Patty agreed with the change in energy, and said many of the largest changes from her eyes have come with a personal change within the team.

“We’re so energetic, I mean we have a great team, we all bond very well,” she said. “For me, I feel like it’s different in a perspective that I have to step up and play a bigger role. I mean there’s a lot of new people, I have to be one of those people that help people out, show them what to do, where to go, so I feel like that has been more of a challenge for me.”

The preseason game against the Eagles was the first of two exhibitions before the regular season begins, the other being one a game at home Sunday against Urbana that is open to the public.

These two games could be more substantial than normal for a team that has so many unknowns and a lack of experience. Juhasz said the Eastern Michigan scrimmage was an important stepping stone for this team to grow off of.

“It was definitely a good learning point for us because it was our first game playing together, and not just against the practice guys that kind of know our skills and abilities at this point,” Juhasz said. “We have to be tougher in rebounding, and I think we have the length and we were pretty strong and we were working hard, but I believe that rebounding will be one of the most important things this year, and if we can improve in that throughout the season, I think we can be really successful.”

Following the exhibition Sunday, the Buckeyes will have a full week before they open their season against Valparaiso. At this point in the preseason, and with about a week until the real games begin, McGuff has pros and cons about where his team stands.

“Kids are working really hard, I like the progress we’re making, but just because we have so many new people and we’re so young, it’s still a little bit choppy and up and down,” he said. “The intensity, the focus, the chemistry is really positive, it’s just going to be a real work in progress throughout the year in terms of really establishing a system, an identity and a way of playing.”

The potential is high for this Ohio State team, but with one closed scrimmage down, it is clear there are still key areas the team needs to improve at.

But the team also understands the untapped potential that is within the roster, and with time, who knows what Ohio State can truly be, even in year one with seven true freshmen.

“I feel like we all know how good we can be, but there’s a lot of steps it takes to be where we want to be, and it’s not just going to happen in a week or a day,” Patty said. “I think mentally and physically we have to be ready for these tougher opponents, so I feel like mental toughness is going to be a big key to our success this year.”