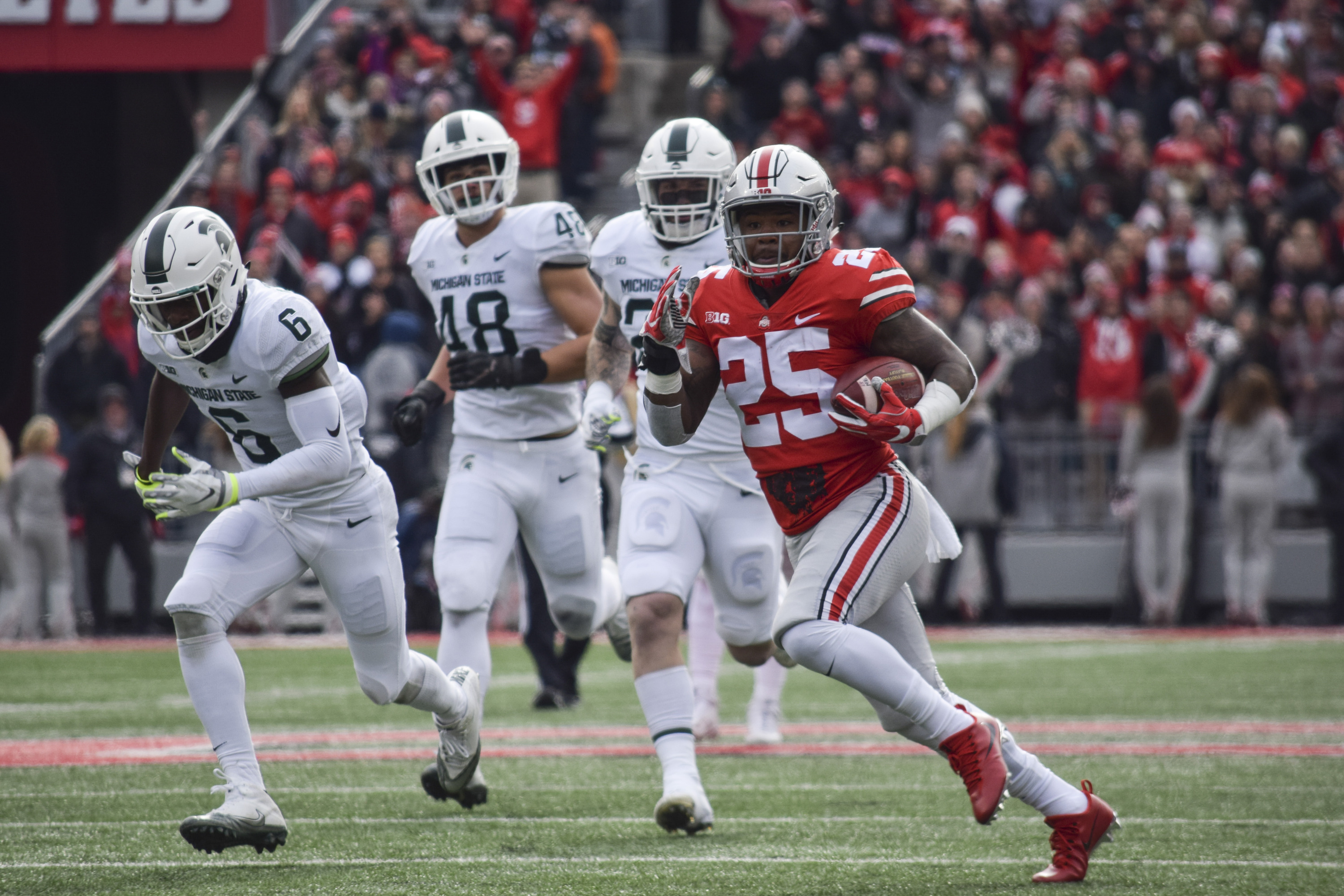 The Ohio State vs. Michigan State rivalry is one that has blossomed ever since Urban Meyer arrived in Columbus.

Meyer is 4-2 against Mark Dantonio’s Spartans since coming to Ohio State in 2012, but just one of those games, last year’s 48-3 thumping, was decided before the fourth quarter. In fact in the other five matchups combined, the teams were only separated by just one point with Ohio State holding a slight 121-120 edge.

Before the 2017 game, the last time the home team had won a matchup in the series was 2007, when the Buckeyes squeaked by Brian Hoyer’s Spartans, 24-17. This rivalry has produced some thrillers over the years, so let’s take a quick look back at the last six games Ohio State has played against the Spartans.

The first year of the Meyer era at Ohio State was anything but pretty, even though it ended in a perfect 12-0 record. The Buckeyes’ first conference game of the season came in East Lansing, Mich. where Braxton Miller ran for 136 yards and threw for another 179 in a one-point win. His lone touchdown pass to Devin Smith, a 63-yard score, gave Ohio State just enough to pull out the win.

The first loss of the Meyer era at Ohio State came in Indianapolis, as Michigan State ruined the Buckeyes’ national title hopes by stunning the No. 2 ranked OSU squad by 10 in the Big Ten title game.

Ohio State surrendered more than 300 yards passing to quarterback Connor Cook while the Buckeyes struggled to get much going through the air. Miller completed just 8-of-21 passes and was stopped short on an infamous fourth down late in the game that ultimately sealed Ohio State’s fate.

The Buckeyes would go on to lose the Orange Bowl to Clemson while the Spartans knocked off Stanford in the Rose Bowl.

The Buckeyes got their revenge in 2014 against the Spartans, the first year of realignment in the Big Ten. After playing in separate divisions for the first three years of the Big Ten expansion, Ohio State and Michigan State were both played in the Big Ten East division and put together a showdown for the ages.

Freshman quarterback J.T. Barrett played the best game of his freshman season, completing 16-of-26 passes for 300 yards and three touchdowns and added another 86 yards and two scores on the ground.

The win for Ohio State propelled them to a division title, conference title and national title as the Buckeyes went on to complete one of the most impressive runs in program history, finishing the season 14-1.

Perhaps the most excruciating loss in Meyer’s tenure at Ohio State, the Buckeyes failed to get anything going on offense and struggled to a 14-14 tie with Michigan State late in the fourth quarter.

Despite playing without star quarterback Cook, the Spartans managed to get within range for a field goal attempt which Michael Geiger pushed through to complete the upset victory over the Buckeyes.

Ohio State managed just five first downs and 132 total yards of offense in the loss, which kept them out of the College Football Playoff.

Much like the 2012 game, the 2016 matchup didn’t feature much offense as high winds and snow flurries blew through Spartan Stadium.

Michigan State, winners of just three games in 2016, kept the Buckeyes on the ropes throughout the game and had a chance to win late with a two-point conversion attempt. Playing with nothing to lose, Dantonio went for the win, however Malik Hooker and Chris Worley stepped in front of a pass from Tyler O’Connor, preventing a Spartan upset.

Ohio State ran the ball effectively against the Spartans that day as both Barrett and Mike Weber went over 100 yards in the one-point victory.

Perhaps the most perplexing game in this rivalry, Ohio State entered the game coming off a shocking 55-24 loss to Iowa while the Spartans were fresh off of an upset of Penn State. After being unable to run the ball, or perhaps refusing to run the ball against Iowa, the Buckeyes came out with an early emphasis on the run game and it paid off.

Ohio State bulldozed the Spartans for 334 yards on the ground as both Weber and J.K. Dobbins went over 100 yards in the win. The Buckeye defense was equally impressive, holding Michigan State to just 64 yards rushing on 34 attempts and forcing quarterback Brian Lewerke into three turnovers.

Lewerke is set to return as the Spartan quarterback on Saturday against the Buckeyes, looking for more success than he found last season in a 45-point shellacking.