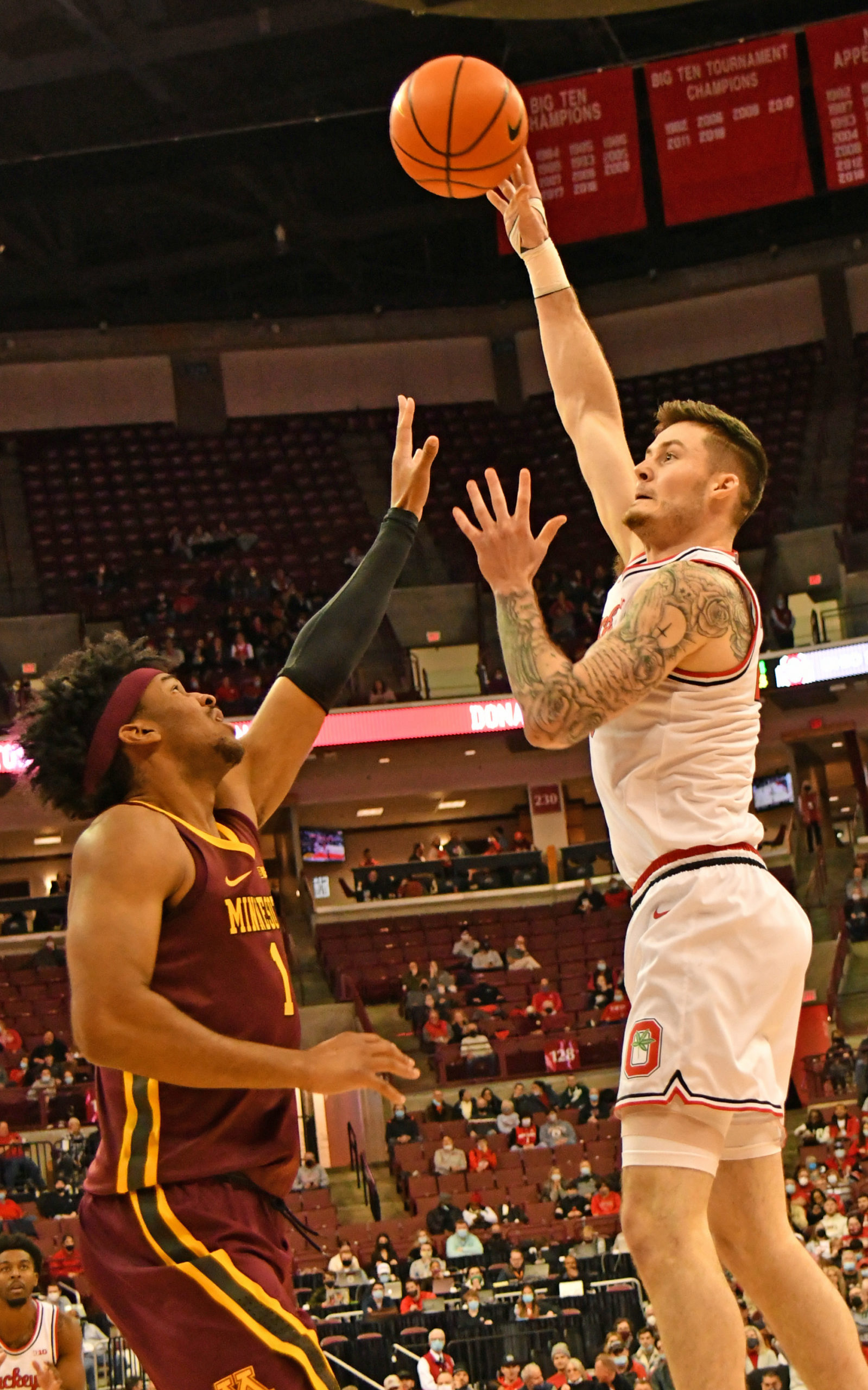 Ohio State (16-6, 9-4 in the Big Ten) put the finishing touches on its season sweep of Minnesota (12-11, 3-11) on Feb. 15 only about two hours removed from a result about three hours east of Value City Arena that could prove far more important for the Buckeyes than their own win. As OSU escaped the Golden Gophers – again dominating them on the boards as it did in game one – it provided itself with a half-game of insurance for Big Ten tournament seeding with an 70-45 victory.

Because as the Buckeyes were successful on the 15th, Michigan State – also vying for a top-four seed and two byes in tournament play – came up short. The Spartans fell late in a matchup with Penn State, knocking them from their perch at the No. 4 seed and creating a space that the Buckeyes filled, jumping ahead of both MSU (9-5) and Rutgers (9-5) in the league standings and creating some insurance in the case of a loss down the stretch, so long as it’s not to the Spartans on March 3.

That’s a thought for the future, though. In the moment, against the Gophers, Ohio State again proved itself superior in the paint, riding the same gameplan that it used to torch Minnesota in Minneapolis only a month prior. The Buckeyes won the rebound battle 36-29, scored 28 points in the paint to Minnesota’s 14, but faced more resistance at home than it did on the road for at least one half.

Despite Ohio State’s presence down low and a 33.3 percent field goal percentage in the first half for Minnesota, the Buckeyes turned the ball over eight times and missed on all but one of eight 3-point tries to not only keep their foes in the game but to outright cede the halftime lead, trailing 25-23 at the break. The first 20 minutes of play saw Ohio State face a three-minute scoring drought within the first 10 minutes and one-up that in the last time, going entirely scoreless from the 9:22-mark to the 2:33-mark while Minnesota rattled off 10 points to claim a 23-17 lead, its largest of the game.

The Buckeyes must have solved whatever ailed them in the halls of Value City Arena, because they came out firing from the opening seconds of the last 20 minutes and never really stopped. OSU opened with a 14-4 run to leap out to a 37-29 lead with 15:36 to play, bolstered by a Jamari Wheeler 3-pointer rattling in to open the scoring, a pair of Zed Key lay-ins and back-to-back Malaki Branham triples that brought the home crowd to a fever pitch and forced Minnesota into a timeout.

That break did nothing to blunt the suddenly formed Buckeye buzzsaw as Wheeler knocked down another 3-pointer to give Ohio State a 40-29 edge on its next possession, though a Luke Loewe 3-pointer on the other end did at least temporarily halt the stampede into a media timeout, but not for long. Liddell broke the break with a jumper, Minnesota came up short on its next two possessions and Wheeler stayed hot, converting a fast-break layup and knocking down another 3-pointer after a Loewe jumper to push the OSU lead to 47-34.

That run all but ended the game. Minnesota scored only 20 points in the second half to Ohio State’s 47, and never drew any closer than 14 points in the last nine minutes of the game, and when it did, at 56-42 with 4:40 on the clock, Liddell knocked down consecutive 3-pointers to answer, pushing the lead to 20 points.

Liddell led the Buckeyes with 16 points and 10 points, Wheeler finished with 13 points and Branham added 11. Loewe was at the front of the Minnesota attack with 12 points.