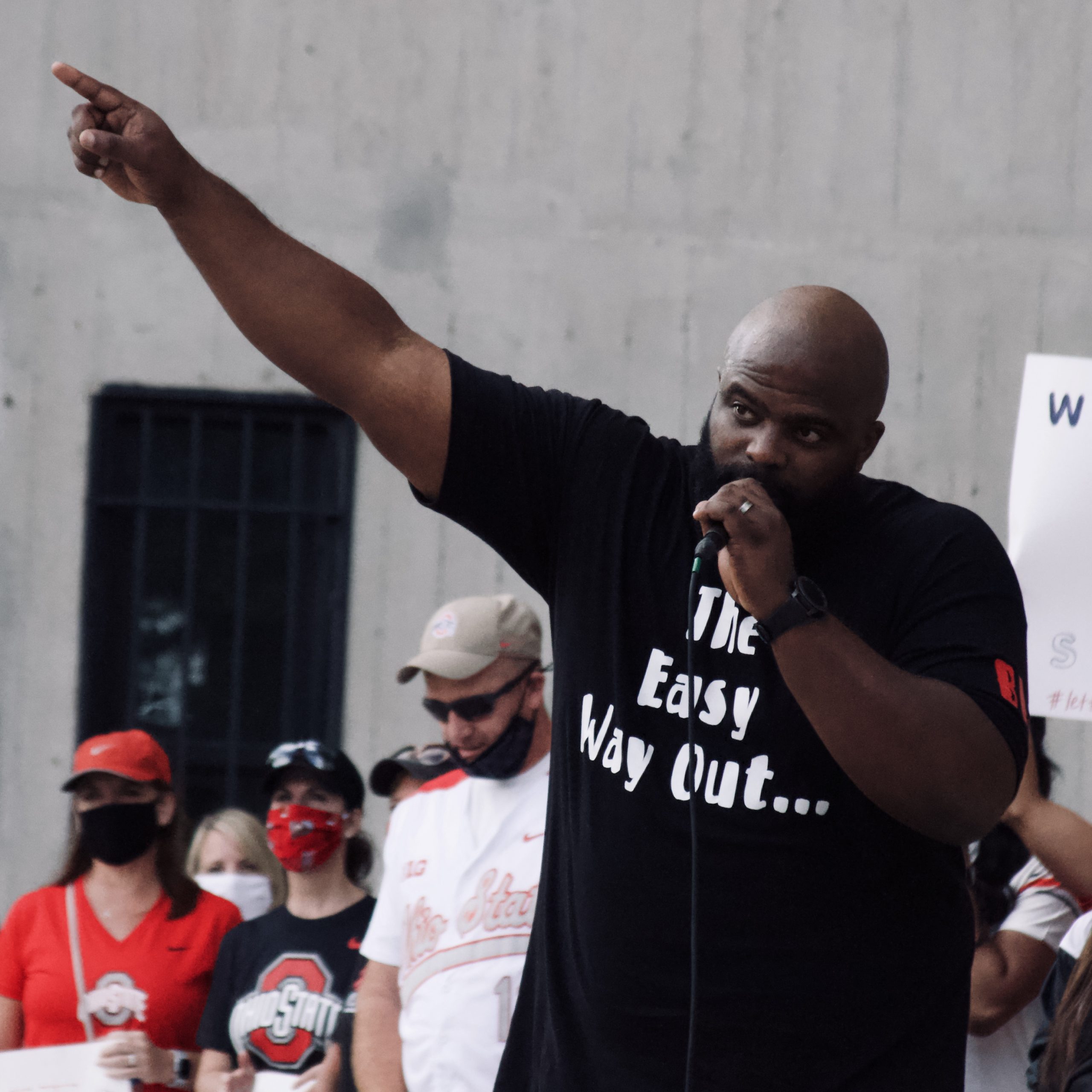 Parents from Ohio State football, as well as baseball, stood in front of a large crowd of Ohio State fans at Ohio Stadium Saturday to talk about why they believe that their kids should be playing football in the fall, despite the Big Ten’s decision to postpone football for the remainder of the year.

The group, which is led by Football Parents at Ohio State (FPAOS) President Amanda Babb, mother of wide receiver Kamryn Babb, talked for about 30 minutes, with multiple parents making their voices heard on what they believe needs to be done by the Big Ten and, specifically, buy Big Ten Commissioner Kevin Warren.

Amanda Babb, president of the @fpaos_board, with a speech about wanting transparency from the Big Ten.

Also, she thinks Ohio State has the best team in the country. pic.twitter.com/g6LuBxDQpl

“The schedule came out, I called coach (Ryan) Day and said ‘OK, what can we do as a parents’ organization?’ We had a plan, and then three days later, it’s like the whole world was taken out from under us,” Babb said at the rally. “We just want that transparency. What happened? What happened from Aug. 5 to Aug. 11? We think the commissioner and the presidents of the universities owe that to us as parents, they owe it to you as fans, that’s what we want.”

Though Babb is president of FPAOS, it was Randy Wade, father of cornerback Shaun Wade, who originally posted on social media about the idea of holding a rally at Ohio Stadium. Wade’s major talking point was about not taking the easy way out, which he had the audience repeat throughout his speech, as neither he nor his son have throughout Shaun’s football career.

Randy Wade says the Big Ten is taking the “easy way out” by postponing the season. pic.twitter.com/wb9oTiC3MF

“This week right here was a hard week for my job. I got put on a leave because of a situation that has nothing to do with this, and I could have easily said ‘Man, you know what? Shaun’s going first round, I don’t have to be here,'” Wade said. “But you know what I did? I came here to support the Buckeyes, because I didn’t want to take the easy way out.”

Scott had a specifically emotional speech talking about the heartbreak of not being able to play that conference-only schedule, and how it should be up to the parents and the players if there is football played this fall.

A very impassioned speech by @GeeScottSr on why it should be up to the players and families to decide if Ohio State, and the Big Ten, plays this season. pic.twitter.com/Sa7ItTC1UE

“When that schedule came out, was it not the best looking schedule you’ve seen in your life?” Scott asked the crowd. “And four days later, rip, the season was yanked from us.

Johnson said to the crowd of fans that when her son committed to Ohio State that he was also committing to the Big Ten, but that she now is uncertain that the Big Ten’s commitment is the same to the teams and players.

Monica Johnson, the mom of freshman OL Paris Johnson, says she has always taught her kids that they can’t come to her with just a problem. They need to find a solution. And the Big Ten hasn’t done that. pic.twitter.com/pOjwxJFeFs

The Ohio State parents were part of a group that wrote a letter to Warren under Big 10 United on Aug. 26 that asked for more transparency, a parent organization forum and a request in the findings from the conference’s Return To Competition Task Force.

“We are extremely disappointed in your Aug. 19, 2020 correspondence in response to widespread requests for an explanation. Candidly, at this point, the parent organizations have a total lack of confidence in your ability to lead and communicate effectively with all key stakeholders,” the letter reads. “This correspondence is intended to convey the total lack of confidence in the Big Ten Conference’s leadership, specifically in the lack of planning, collaboration and/or communication.