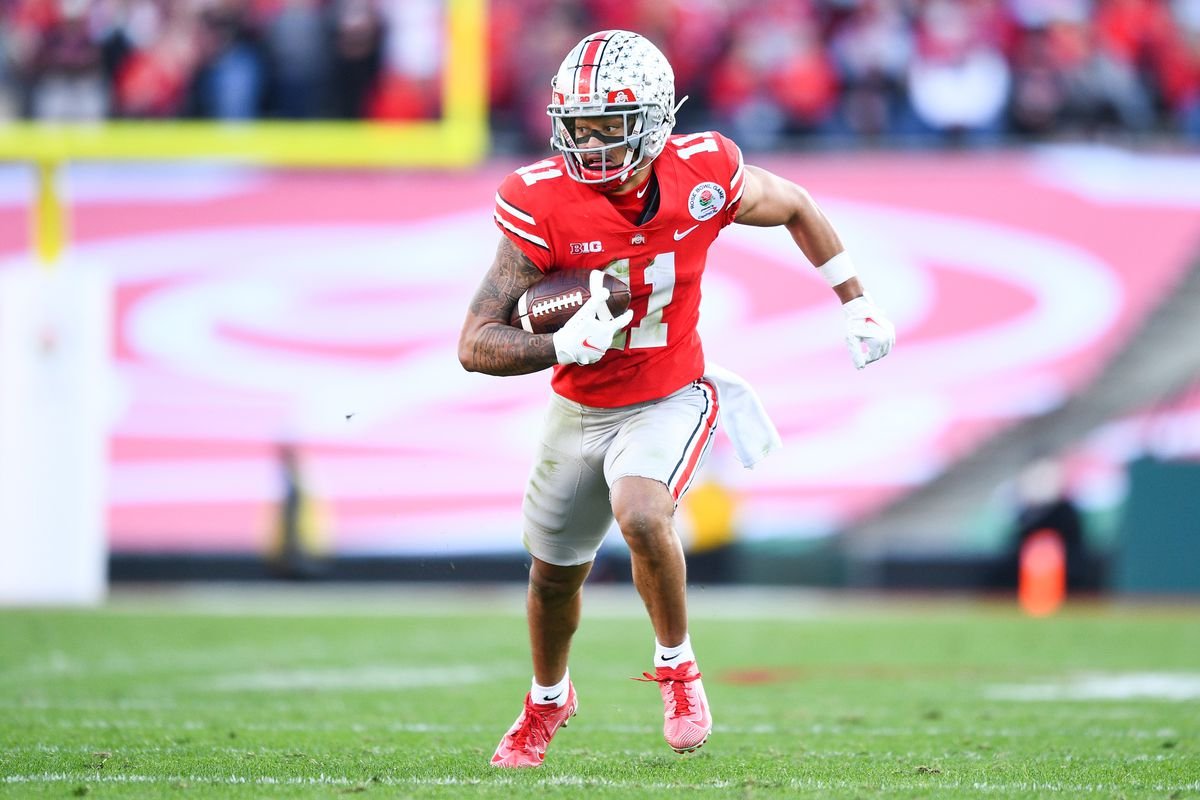 Jaxon Smith-Njigba and Marvin Harrison Jr. are locked in as Ohio State’s starters at wide receiver, while Fleming and Egbuka look to be in a battle for the third spot in the offense. Egbuka will be in line to return kicks this season, and he can presumably play anywhere in Day’s scheme, making him an enticing option to start out wide for the Buckeyes.

This year, there will likely be more of a rotation at receiver than there has been in past years. Chris Olave and Garrett Wilson are off to the NFL, opening plenty of opportunities for snaps behind Smith-Njigba — the only returning starter.

After Ohio State’s season-opening win over Minnesota last season, it looked like Smith-Njigba was going to be the third wheel behind Olave and Wilson in the passing offense. The slot receiver mustered only two catches for 12 yards. Meanwhile, Olave caught four passes for 117 yards and two touchdowns while Wilson added hauled in five passes for 80 yards and a score.

However, throughout the next 12 games, quarterback C.J. Stroud and Smith-Njigba developed a connection that would take the Buckeye offense to new heights. In fact, Smith-Njigba became the most dependable option of the three wide receivers. While that might be hard to believe, the rising junior surpassed Wilson and Olave — the No. 10 and No. 11 picks in the 2022 NFL Draft.

Smith-Njigba broke the single-season receptions record (96) and single-season receiving yards record (1,606) for Ohio State last season. In the Buckeyes’ Rose Bowl win over Utah, he set the single game receiving yards record with 347 yards against the Utes. He also tied his single-game reception record of 15 that he set earlier in the year in Lincoln, Neb.

The Rockwall, Texas, native, returns to Ohio State this season as the unquestioned leader in the wide receiver room. He will be Stroud’s top option in the passing game and should repeat his success in his third season. Like his quarterback, Smith-Njigba is a projected top 10 pick in the 2023 NFL Draft and will look to prove himself worthy of that distinction this fall.

Around this time last year, Harrison had become a household name for those familiar with Ohio State football. The first-year Buckeye had a breakout spring camp where he caught a touchdown in nearly every practice. The anticipation for the son of NFL Hall of Fame wide receiver Marvin Harrison could not have been higher.

However, the younger Harrison did not make a significant impact on the Ohio State offense through the first 12 games. He primarily took a backseat role to Olave, Wilson and Smith-Njigba and quietly developed behind the scenes. When Olave and Wilson announced they would not participate in the Rose Bowl against Utah, Harrison received his first opportunity to show how far he’d come in his first season as a Buckeye, and he did not disappoint.

Harrison caught six passes for 71 yards and three touchdowns in his first career start, creating even more excitement for his future in an Ohio State uniform. Harrison brought in three balls from Stroud, who had a record-breaking New Year’s Day at quarterback, and developed a strong connection with the Buckeye signal-caller — one that will undoubtedly continue growing before the 2022 season begins. His 6-3, 205-pound frame will create a massive target for Stroud in the end zone, so get used to hearing that duo connected often this fall.

Fleming’s Ohio State career has been riddled with injuries. With a sport as physical as football, injuries are the unfortunate reality for some football players. Still, the former No. 1 overall wide receiver in the class of 2019 will be a junior this fall and has time to salvage his Buckeye career.

With more consistent playing time, Day and Hartline can only hope that Fleming will develop into the talented receiver they know he can become. While he might not be the record-breaking player he was in high school, he can still provide the Buckeyes with a weapon on the outside for Stroud to hit in stride.

At this point, Fleming feels like a natural frontrunner for the third wide receiver spot, but he will need to fend off Egbuka from the position. Like Fleming, Egbuka was a former five-star recruit and top receiver in the nation which levels the playing field and makes the competition all about production in summer workouts and fall camp.

Egbuka will battle with Fleming for the third wide receiver spot in the Ohio State offense. Buckeye Sports Bulletin sees Egbuka as a backup for Smith-Njigba in the slot, but with the latter also bouncing outside or moving to the backfield, Egbuka could see plenty of opportunities in that role.

Rather than scrap for backup snaps, Egbuka could win the third spot outright and never have to worry about receiving developmental reps. Egbuka proved in small sample sizes last season that he’s capable of breaking things open for the Ohio State offense. Remember his 85-yard reception against Akron? He almost took a screen pass the entire length of the field for a touchdown before he fell short of the goal line. That kind of playmaking is a rarity even in the Buckeyes loaded wide receiver room.

Egbuka’s athleticism and versatility will create problems for opposing defenses, and how he maximizes those qualities in fall camp can determine whether he or trot onto the field for Ohio State’s first offensive snap against Notre Dame on Sept. 3.

Ohio State will primarily use Smith-Njigba, Harrison, Fleming and Egbuka in the passing offense next season, but the Buckeyes will also rely on players like Babb and Ballard to provide depth in the rotation.

While one of the four incoming freshmen could flash in their first seasons, they don’t have the same expectations as Harrison and Egbuka had entering 2021. They will likely see most of their playing time come against lesser opponents when the game is all but decided. Look for Burton, Grayes, Brown and Antwi in games like Arkansas State, Toledo, Rutgers, Northwestern, Indiana and Maryland.