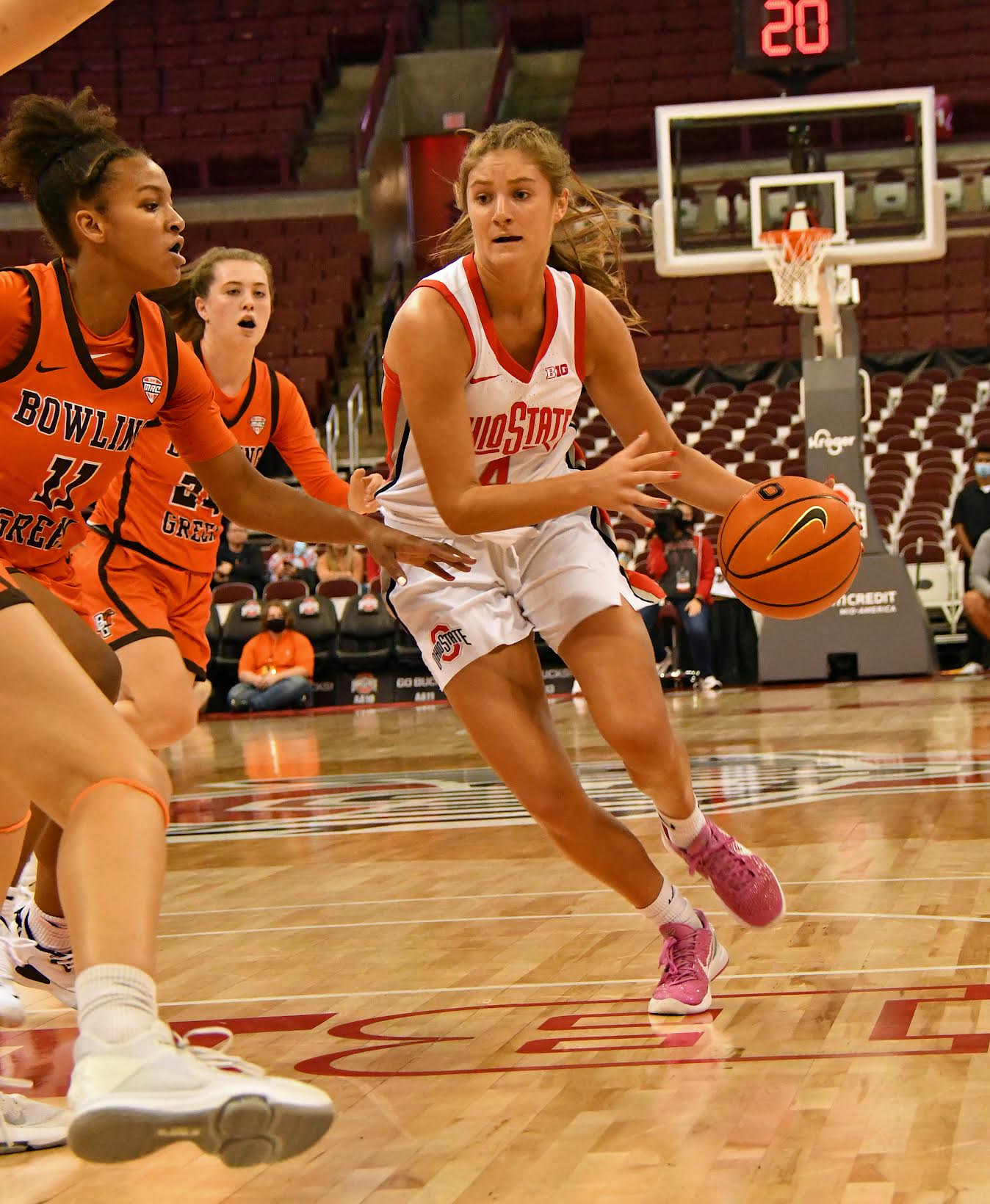 Senior guard Taylor Mikesell and junior forward Rebeka Mikulasikova each continued their impressive starts to the season as they helped lead the Buckeyes (3-0) to a 94-63 win over the visiting Bowling Green Falcons on Nov. 17.

Ohio State quickly lit up the scoreboard in this contest, taking advantage of four and-one opportunities in the first quarter to take a 15-5 lead just four minutes into the game. Mikesell added a three-pointer, followed by a pair of baskets by graduate forward Tanaya Beacham, to give the Buckeyes a 26-14 lead at the end of the first.

The defensive press for Ohio State caused problems for the Falcons early on, forcing nine turnovers in the first quarter, with the Buckeyes scoring nine points off said turnovers. Additionally, Bowling Green committed eight personal fouls in the first 10 minutes, leading to a double-digit deficit despite shooting 54.5 percent from the field in the first frame.

In total, the Falcons ended the game with 25 turnovers, of which Ohio State scored 27 points off of.

Junior forward Rebeka Mikulasikova took over in the second quarter, scoring seven points on 2-of-4 shooting and two trips to the free-throw line, plus picking up four rebounds.

Junior guard Jacy Sheldon (six points), sophomore guard Kateri Poole (five points) and Mikesell (five points) each contributed in the quarter as well to make it 52-33 at the half.

While Ohio State’s shooting gave way to a significant lead throughout most of the contest, the Buckeyes’ intense press led to a number of open drives and looks from beyond the arc for the Falcons, who finished 8 of 18 from three-point range, but in general were not knocking down good looks.

Regardless, the offense kept rolling in the third quarter, scoring 21 points off the shots of Sheldon, Mikesell and Mikulasikova, while defensively they held the Falcons to just 13 points to make it 73-46 heading into the fourth.

The Falcons went on a run of sorts in the fourth, scoring 17 points, but the deficit was far too much to overcome as the Buckeyes added 21 points in the final frame to make the final 94-63.

Mikesell and Mikulasikova tied as the team’s leading scorer with 19 points. Mikesell finished 6 of 10, while Mikulasikova was 8 of 13. Sheldon was the team’s best shooter, finishing with 17 points on 8-of-11 shooting, and senior guard Braxin Miller had a team-high nine rebounds and seven assists.

As a team, Ohio State shot 56.7 percent from the field while holding the Falcons to just 42.6 percent. The Buckeyes also finished over 50 percent from beyond the arc on 8-of-14 shooting.

Ohio State will return to the court Tuesday to play Bellarmine, with tip set for 7 p.m.