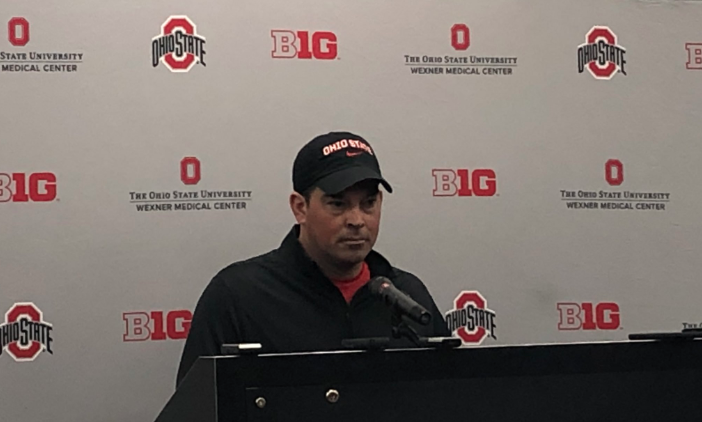 Ahead of Saturday’s spring game at Ohio Stadium, a noon kickoff on Big Ten Network, the Buckeyes have one more practice Friday morning.

The annual scrimmage presents Day and the coaching staff a first look at OSU in a game-like atmosphere after 11-on-11 glimpses in March and April, but competition is expected to continue across the board into fall camp.

“Going into preseason, we just want to pick up where we left off that way and it’s the same thing with the competitions,” Day said. “Preseason’s a long time. It’s three weeks. Injuries happen. Different things happen. We’d like to mix up the different guys working with each other. I think some positions are more important than others, but we always want to have a competition. So we’re not in a rush to name starters or anything like that. I don’t think that’s appropriate, really, until you get into the preseason. So competition is really good because that drives guys to get better.”

Quarterback headlines the battles with sophomore Justin Fields and redshirt freshman Matthew Baldwin in contention, but Ohio State has holes elsewhere on its roster.

While talent comes up the ranks in the receivers room, the Buckeyes graduated three of their top wide outs — Parris Campbell, Johnnie Dixon and Terry McLaurin — as they fill the voids around fifth-year senior K.J. Hill.

Seniors such as Austin Mack and Binjimen Victor bring a veteran presence, but sophomore Chris Olave and freshman Garrett Wilson are standout underclassmen.

“If some guys have been starters before or are more experienced, they’re kind of the incumbent — other guys have got to beat them out,” Day said. “Other positions, you’ve got to play depth. So who was the starter last year? Parris Campbell, K.J. Hill — they both played (H-back) but never got into (who’s the starter). Who’s the starter at ‘Z’ (receiver)? Terry McLaurin, Johnnie Dixon — they both kind of played. So I guess that sometimes depends on the position, too.”

Regardless of unit, Day plans to process each position with guidance from his assistant coaches. Day ultimately decides, but as spring camp nears its completion, two-deep choices will be written in pencil — not pen — before practices pick back up in August.

“So at the end of the day, I have the final say. But again, empowering the position coaches and the coordinators to give their opinion. And ultimately, it comes down to me. But the majority of the time, everybody knows who the starter is.”

Without full tackling, OSU’s “thud” spring game will feature 10-minute quarters and a running clock in the second half. Looking beyond the returning starters from the 2018 team, such as defensive ends Chase Young and Jonathon Cooper, Day said he studies how his younger players react to a potential capacity crowd of 76,000 in the Horseshoe as a lasting impression into the summer.

“I just kind of want to see how some of the guys go out there and play,” Day said. “I think when you look at, on defense, a lot of guys have experience. They played a lot of football, but they’re in new schemes and kind of see how they put that on the field, what that looks like in a game situation. On offense, we have guys who have some experience, but not a lot of game starts. … So those guys, you know what you’re going to get out of that group. It’s the younger guys, not as much. Some of the guys on the offensive line, quarterbacks.

“I’m excited to see how the secondary plays. I’ve got a good feel for what the defensive line’s going to look like with Chase and Coop and (sophomore end) Tyreke Smith and those guys coming off the edge. Interior guys, kind of excited to see what those guys look like, they’ve had a really good camp. And then at linebacker, I think they’ve gotten their hands on a lot of balls. They had an interception (Wednesday), got their hands on a pass and they’ve been more active. So that’s good. So you know what you’re going to see with a lot of those positions, but some of the younger guys who haven’t played, just want to see how they react in the Horseshoe.”