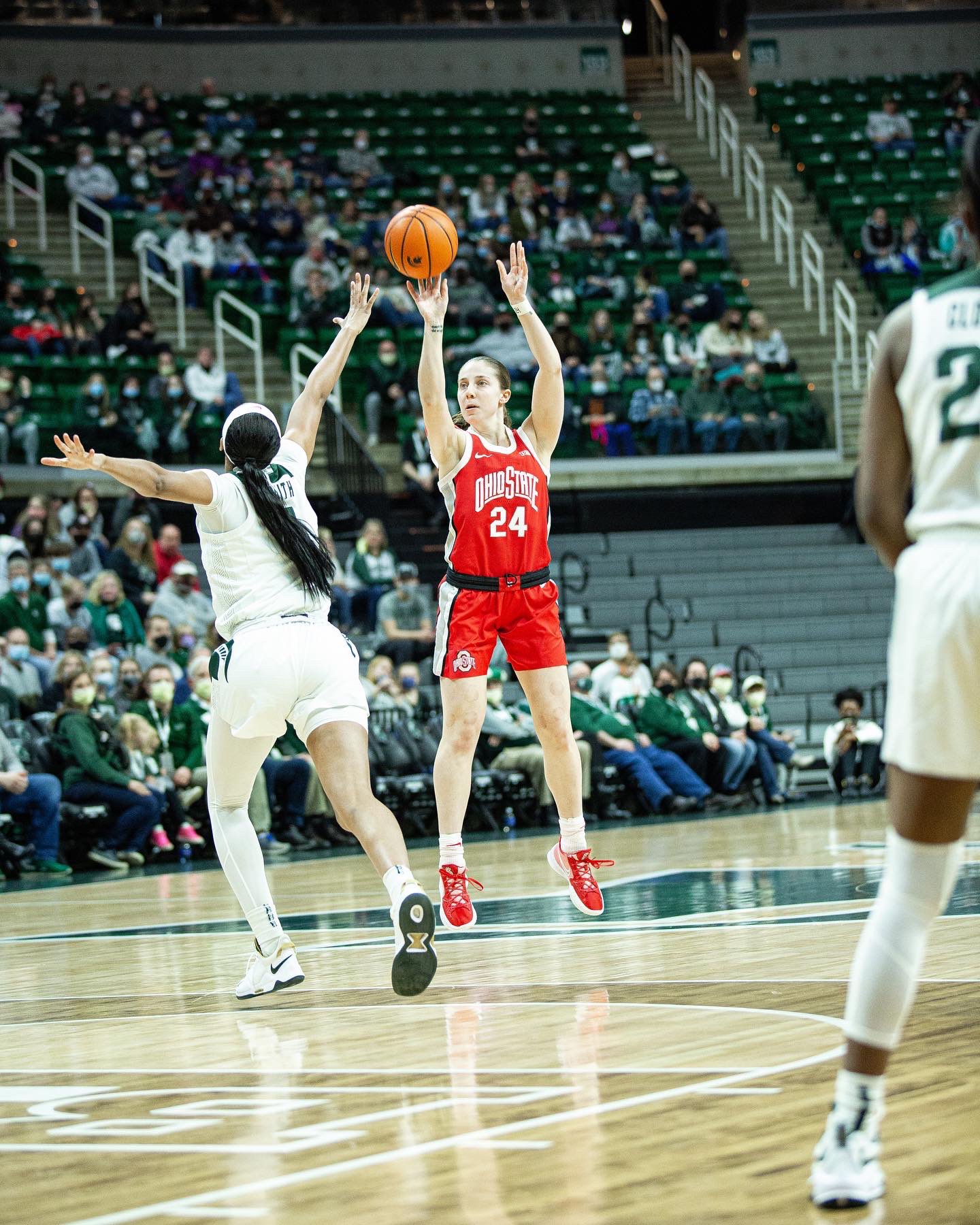 The stakes were clear for Ohio State headed into this contest – win, and have a chance at a share of the Big Ten regular-season championship, or lose, and get relegated to either third or fourth in the conference standings.

For most of this season, the Buckeyes have won the games they were supposed to, and against a Michigan State team just one game above .500, Ohio State (22-5, 14-4 Big Ten) took care of business with a potential conference title on the line, heading on the road to take down the Spartans (14-14, 8-9), 61-55.

The Buckeyes led 22-15 after the first quarter, but the lead could have been more if not for a stronger rebounding effort. Ohio State was 9 of 17 from the field (52.9 percent) and forced six turnovers resulting in nine points, but the Spartans outrebounded the Buckeyes 12-6 in the first frame, pulling down six on the offensive end that resulted in five second-chance points.

Ohio State seemed to get things in order, holding a 28-20 lead with 5:57 remaining in the second, but the Spartans took off on a 7-0 run, requiring just 39 seconds to get right back in the game after a dominant opening to the quarter by the Buckeyes. Michigan State appeared to be building momentum, but after guard DeeDee Hagemann’s triple to pull within one, 28-27, with 3:44 remaining, the Spartans scored just two points on a pair of free throws from guard Nia Clouden, and trailed 32-29 at the half.

Despite holding Michigan State to just 25.0 percent shooting from the field in the first half, the Buckeyes led by just three points as the Spartans were 11 of 12 from the free-throw line and outrebounded Ohio State 28-14 in the first 20 minutes. Beyond a strong performance on the defensive end, senior guard Taylor Mikesell, who had 12 points on 5-of-11 shooting, and junior guard Jacy Sheldon, who dished out five assists to four different players, were the main reasons Ohio State stayed ahead in that first half.

Both teams struggled from the field to open the third quarter, combining to miss their first six shots before the Spartans hit a layup with 7:47 remaining, cutting the deficit to one point, 32-31. It took until the 6:13 mark for Ohio State to get its first points of the half, a layup from Beacham on which she was fouled and converted the free throw to make it 35-31.

Michigan State threatened to take the lead just minutes later, tying things up at 37 with 3:23 remaining after a layup from forward Taiyier Parks after she secured an offensive rebound, but senior guard Braxtin Miller responded on the other end with a layup as Sheldon assisted on her seventh basket of the game. Just three possessions later, the Spartans took a 41-39 lead after a pair of free throws from Clouden, their first since they led 2-0. Ohio State retook control heading into the fourth, as sophomore guard Kateri Poole knocked down a triple as the third quarter ended to lead 44-41.

Poole – who has been playing but has not seen significant action since being injured earlier in the season – continued building upon her best game in the second half of this season, knocking down another 3-pointer to start off the scoring in the fourth, and after a free throw by Mikesell, the Buckeyes led 48-41.

After Ohio State took the seven-point lead, the Buckeyes connected on just one of their next eight shots as the Spartans took a 51-50 lead with 3:33 remaining in the game. Beacham finally broke through the scoring wall as Beacham connected on a jumper near the basket, giving the lead back to Ohio State, 52-51.

The Buckeyes forced a miss on the other end from Clouden, and Mikesell hit a jumper on the other end. Then, after a steal from freshman forward Taylor Thierry, Sheldon hit a layup to give Ohio State a five-point lead, 56-51, with just 2:27 remaining. Michigan State then cut the deficit to just two points, 56-54, forcing head coach Kevin McGuff to call a timeout with under a minute remaining.

The Spartans had the ball with the chance to tie or take the lead, but after a miss from Clouden, they were forced to foul the Buckeyes, who closed things out at the free-throw line with Sheldon and Thierry for the 61-55 win.

Mikesell led the Buckeyes with 17 points in the win, while Thierry led with a career-high 11 rebounds and Sheldon dished out 10 assists, tied for a career-high. Michigan State forward Tamara Farquhar finished with 10 points and 22 rebounds, 10 of which came on the offensive end.

Ohio State did its part to potentially be named a conference champion, but will not know whether it will be named co-conference champions until the final of the game between Michigan and Iowa, which was set to tip off at 4 p.m. With a Michigan win, the Wolverines will become outright Big Ten champions and the Buckeyes would be the No. 2 seed in the Big Ten Women’s Basketball Tournament.

With a win by the Hawkeyes, however, Iowa and Ohio State would share the Big Ten regular-season title, each with 14-4 conference records. The Buckeyes would be the No. 1 seed in the tournament due to their win over Iowa earlier this season.

Regardless, Ohio State secured a double-bye in the tournament with its win over Penn State, which means the Buckeyes will not take the court until Friday, with their opponent and tip off time still to be determined.