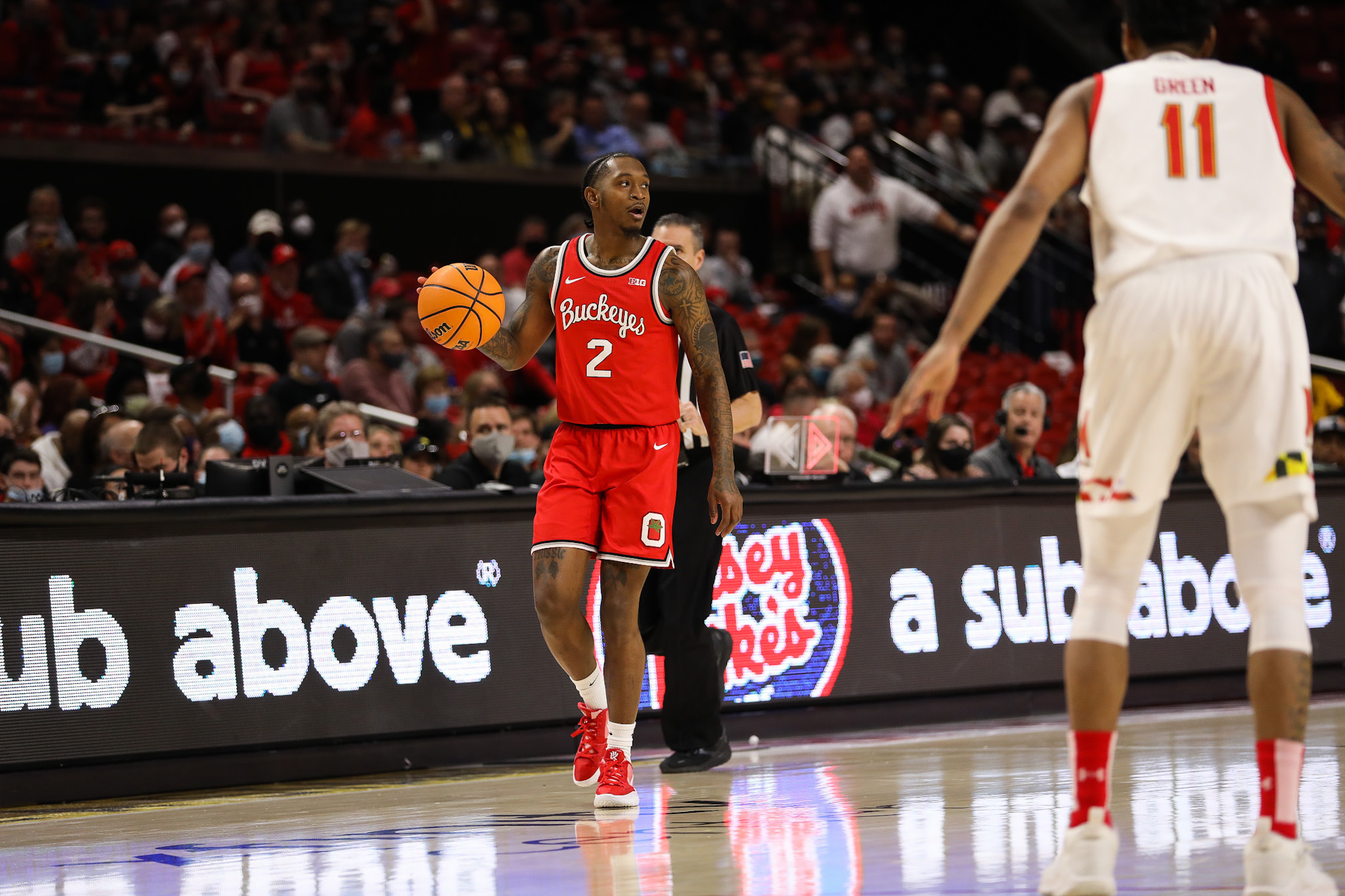 Ohio State freshman Malaki Branham had been the story of the week in Columbus. The silky smooth 6-5 guard had led the Buckeyes in three consecutive matchups, delivering a critical road win over Illinois on Feb. 24 with 31 points and lifting OSU in overtime against Indiana on Feb. 21 as he pitched in another 27 points. He was rising fast on NBA draft boards and quickly evolving into a reliable second option next to junior forward E.J. Liddell, who had carried the load for much of the season but was able to take a bit of a break against the Fighting Illini and Hoosiers.

Unfortunately for the Buckeyes (and for Branham), it seemed on Feb. 27 that the story had spread from Columbus and that its final road game host of the season, Maryland, was well-versed in the new freshman phenom. The Terps made Branham a focus of their defensive efforts throughout the game, limiting him to 4-of-13 shooting for 13 points.

That gameplan proved wise for Maryland, which managed to force Ohio State into a run-heavy attack that was unable to keep up with the Terp attack, led by 23 points from guard Eric Ayala, on the way to an 75-60 defeat. The Buckeyes still hold the best odds for the fourth and final double-bye spot but will need to finish the season with three straight wins against Nebraska, Michigan State and Michigan (all at home) to ensure its security in that position because of this defeat.

Although Branham’s struggles were the headlining story of the opening frame, it was Ohio State’s struggles from downtown that played as large, if not an even larger role in a 32-28 deficit at the half and to the eventual defeat. The Buckeyes were just 3-of-16 shooting from 3-point range in the opening frame, sustained only by a pair from Cedric Russell and one for Jamari Wheeler. Branham missed all four of his first-half tries, while Liddell and Eugene Brown III each went 0 for 3.

Out of the break, those struggles persisted. Wheeler knocked down a pair to open the second set of 20 minutes but the onslaught would not continue as the Buckeyes converted only three more on 10 tries.

Ohio State was not alone in its efforts to drop this matchup, though. Maryland experienced a much hotter-than-usual showing from the field all game, doing the majority of its work from within the 3-point line while leaning heavily on the guard pairing of Ayala and Fatts Russell. Russell added 27 points to Ayala’s effort as Ohio State struggled to find any long-term solution defensively.

That was a bit of a new problem for Chris Holtmann’s squad. The Buckeyes have had problems with talented big men in the paint because of their lack of size down low, but Maryland is largely without that – starting center Qudus Wahab makes his presence felt more defensively. Instead, the Terps went right at Branham, Brown, Meechie Johnson Jr., Russell and Wheeler and found frequent success. Forward Donta Scott played an important role offensively as well, finding opportunities against Liddell and totaling 14 points.

Those three and Maryland’s continued hot shooting ultimately provided the spark for an 11-3 run that spanned more than three minutes and gave Maryland its largest edge of the game, 64-53, with 4:17 to play. Ohio State had stayed within two possessions for much of the second half and never fell behind by more than eight points (early in the half, 36-28) before that run, but without its stars, the OSU offense just could not keep up.

Liddell chipped in only 11 points, among his lowest outputs for the season. It was Russell who led the Buckeyes beyond Branham from the field with 12 points, all coming from 3-pointers. Maryland let the Buckeyes back within single-digits when Liddell hit a pair of free throws right after that run but expanded its lead to as many as 18 points before settling into its final 15-point winning margin.

With those new defensive issues, Branham’s disappearance from the offensive attack – and Liddell’s, as it turned out – and the tepid shooting from deep, Ohio State had a formula for an upset loss that, despite the frustration it inspired, really won’t sink any of its largest hopes for the season. The possibility of a top-four seed is fully intact still, and because Wisconsin toppled Rutgers the day prior, Ohio State’s chances at sharing in the Big Ten regular season title had already dipped to almost zero before its loss.

But for it to secure that bid, it’s hard to imagine that another 36.2 percent shooting performance from the field with 11 turnovers and 18 free throws allowed would be acceptable, even with the lowly Cornhuskers and bubble-sitting Wolverines on the docket.