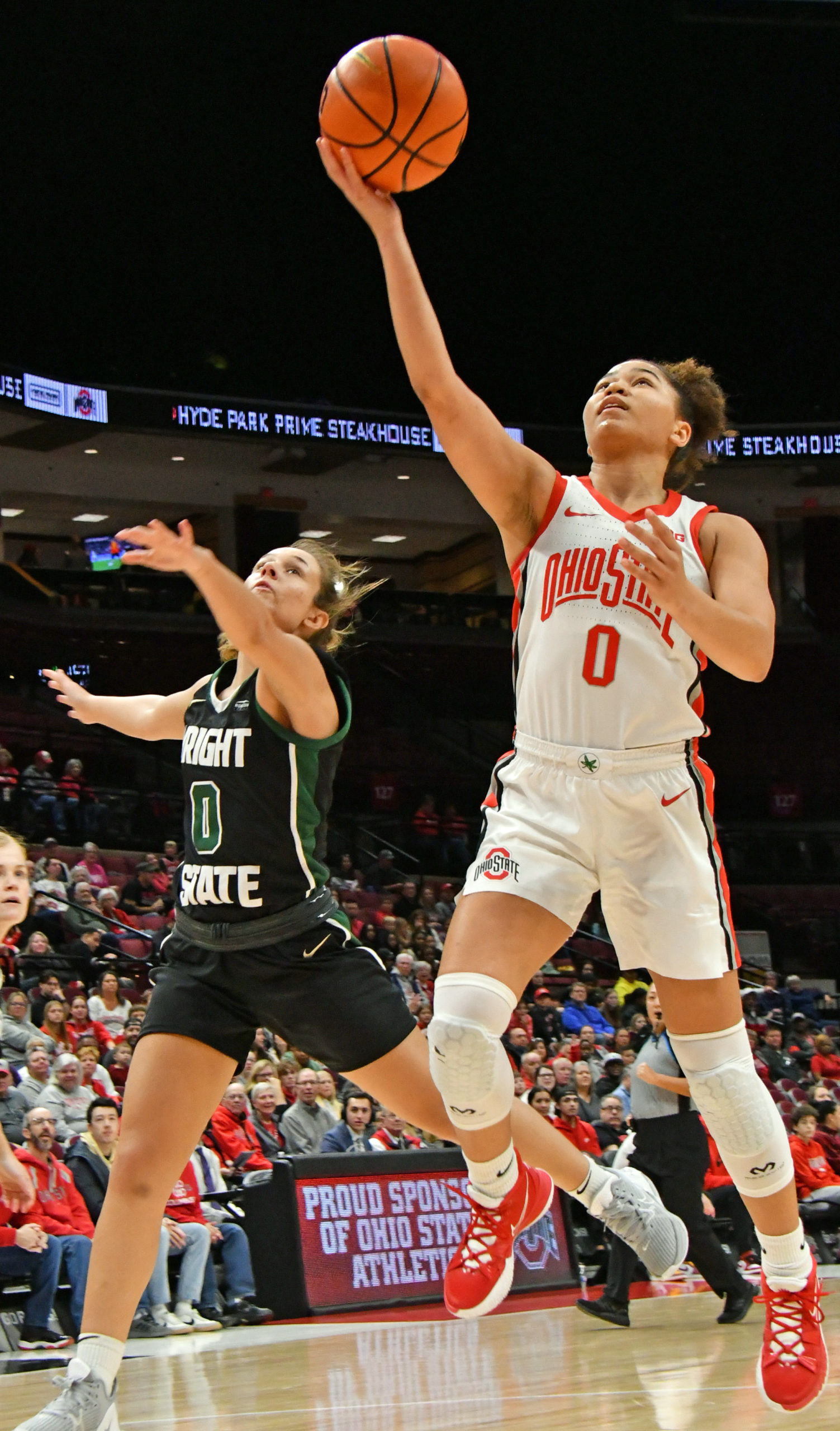 The Wright State Raiders were looking to plunder a win from Ohio State on Wednesday, but the Buckeyes dominated from deep en route to a 105-52 win to move to 5-0 on the season.

Even though the Buckeyes were without the services of guard Jacy Sheldon – who was on the team’s bench during the game but sported a boot on her right foot – Ohio State still got off to a hot start offensively, connecting on 6 of 8 shots to begin the game. That stretch included a trio of triples from guard Taylor Mikesell, who finished the game 4 of 9 from deep.

Wright State had a slightly better time handling Ohio State’s press, turning the ball over just four times in the first frame, but still trailed 26-13 as the Raiders shot just 31.3 percent by the end of the opening quarter.

The Raiders upped the pace early in the second, outscoring the Buckeyes 9-7 in the first three minutes as they fared better against the press than most teams have this season. But Ohio State then embarked on a 17-2 run to put the game out of reach, and eventually led 56-28 at the half.

Guard Madison Greene – who started her first game of the season in place of Sheldon after coming off the bench for the first four games – heated up in the third quarter, adding 8 points on 3-of-3 shooting. She finished with 17 points on 5-of-9 shooting, her highest scoring total since dropping 24 on Maryland on Jan. 25, 2021.

Freshman forward Cotie McMahon led the Buckeyes during the frame with 10 points (and three steals) and guard Taylor Thierry added a pair of impressive baskets, including a fast break score following a steal, as Ohio State entered the final quarter with an 85-41 lead.

The Buckeyes broke the 100-point threshold in the fourth, adding 20 points in the frame for the 105-52 final.

Forward Rebeka Mikulášiková led the Buckeyes with 18 points on 6-of-7 shooting and added six rebounds, while guard Hevynne Bristow, Greene, McMahon, Mikesell, and Thierry all finished in double digits. Wright State guard Isabelle Bolender led the Raiders with 12 points on 5-of-12 shooting, while the team has a whole shot just 38.5 percent from the field. Ohio State finished 12 of 26 from deep.

Ohio State will return to the court Sunday as the Buckeyes host North Alabama at 1 p.m.