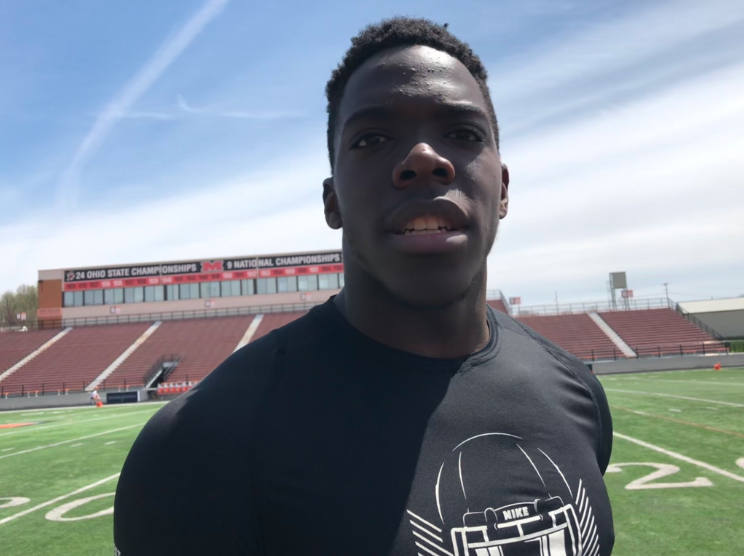 Wednesday afternoon at Olentangy Orange High School in Lewis Center, Ohio, the Zach Harrison saga came to an end. The five-star defensive end announced his commitment to Ohio State, issuing a letter of intent to the Buckeyes and ending a recruitment that had been scattered with question marks.

The 6-5 1/2, 243-pounder picked OSU over finalists Michigan and Penn State. He announced his decision Wednesday at Olentangy Orange in an event closed to the media, sticking to the status quo of how he has approached his process — privately and out of the public eye.

“I want to thank my family, my big sister, for being here, always someone I can talk to when I need to and being my best friend for the past couple of years. Then I want to thank mom and dad for traveling across the country with me and the long car rides and the hotel rooms and all the dinners and the late-night conversations, trying to help me sort through all the chaos that’s been going on. I know it’s been stressful for all four of us. I just want to thank you guys all for helping me through it and just let you know that we did it. That’s all.

“It’s been a long process, but I’ve decided to continue my academic and football career at The Ohio State University.”

Harrison is the 247Sports composite’s No. 4 overall prospect, No. 1 strong-side defensive end and No. 1 player in Ohio for 2019. He has been at the top of the Buckeyes’ board in this class for the past years, drawing out his recruitment after an initial announcement was scheduled to be made Aug. 14 — Harrison’s birthday.

On May 5, Harrison had that date in mind before he began his official visits to Michigan (June 21) and Ohio State (June 23). Those summer trips followed his official visit to Penn State the weekend of April 20, attending its spring game the next day.

Between the month-long investigation at OSU involving head coach Urban Meyer and Harrison’s overall indecisiveness, he pushed his decision back until after Olentangy Orange’s season finished. On Aug. 24, BSB spoke exclusively with Harrison after Olentangy Orange’s 27-26 win over Columbus Worthington Kilbourne. At the time, Harrison told BSB he was torn between his three finalists.

“It’s just that I like all the schools,” Harrison said. “It’s different things about each school, you know? But through this, I call all the coaches, all the players and I’m picking the best of the best.”

I want to thank everyone who was involved in this process and who helped me get this far. With that being said I’m commited to THE OHIO STATE UNIVERSITY!!! pic.twitter.com/stRD32wLQz

Throughout the fall, Harrison took three unofficial visits. He started at Penn State for the Nittany Lions’ 27-26 loss to the Buckeyes on Sept. 29, heading to Michigan for his second trip for the Wolverines’ 38-13 rout of Wisconsin on Oct. 13 and then taking in OSU’s 36-31 victory against Nebraska on Nov. 3.

Harrison, who rarely does interviews, has not spoken in detail about those trips publicly. He addressed reporters during his All-American jersey presentation at Olentangy Orange on Oct. 31 but was brief in his remarks during the question-and-answer portion of the ceremony.

With Harrison’s commitment, Ohio State has two defensive ends in the fold for 2019. Harrison joins Mentor, Ohio, four-star Noah Potter (6-5 1/2, 250), who has been committed to the Buckeyes since April 16.

“Extremely long defender with big joints that wears 245 pounds naturally,” 247Sports director of scouting Barton Simmons said of Harrison in an August evaluation. “Young for his grade and will bulk up to 275 pounds with ease. Archetype, hand-down defensive end frame. Generational testing numbers at his size. Athletic versatility to play wide receiver. Uses hands effectively to read and shed in the run game. Eats up space in zone read game. Possesses twitch and suddenness and can bend the edge as a pass rusher. Speed in pursuit is elite. Very raw as a pass rusher. Still learning to use his hands and developing pass rush instincts. Doesn’t yet dominate the way his physical traits dictate he should. Potential No. 1 overall pick in the NFL Draft and definite impact Power Five defender.”

Off the field, Olentangy Orange head coach Zebb Schroeder has told BSB, is what separates Harrison from other five-star prospects of past recruiting cycles. Despite the quiet personality Harrison displays in public, Schroeder has said the defensive end’s natural leadership and team-first mentality have made the difference in leading the Pioneers to an 8-4 record on the 2018 season.

“I think he can be the type of guy where he’s a captain-type guy — even at that (college) level when you have 25 elite guys in the locker room,” Schroeder said.