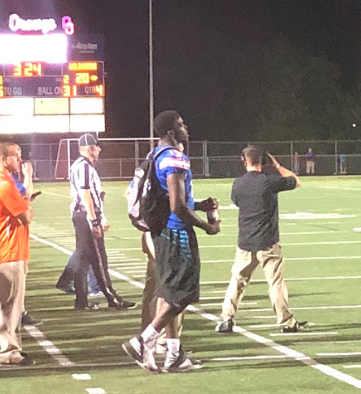 Dinged during a recent practice before he could start his senior campaign with the Pioneers, an injury held Harrison out of pads, keeping him in a jersey and shorts with a black brace on his right knee.

But he refused to let it stop him from making an impact. 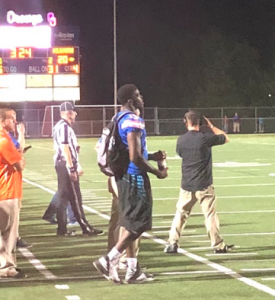 Harrison’s top-five status in the 2019 recruiting class — ranked by the 247Sports composite as the nation’s No. 4 prospect, No. 3 weak-side defensive end and Ohio’s No. 1 player — clearly had no bearing on his team-oriented approach to Olentangy Orange.

Throughout the back-and-forth contest, Harrison patrolled the sideline like his coaches. Animated and invested, he went from picking up players on the bench with helmet pats and high fives to looking back at the crowd and furiously pumping up the student section on pivotal plays of the game.

He took his role seriously, even going into timeouts with Gatorade bottles and aiding the trainers during water breaks, circling teammates with swigs and emphatically providing words of encouragement.

The way Harrison saw it? He had to do anything and everything his team needed to grind out a win.

Olentangy Orange head coach Zebb Schroeder knew his team had to overcome the void Harrison (6-5 1/2, 243) left on the field as a two-way threat at wide receiver and defensive end, but the sideline presence provided a much-needed boost for the Pioneers throughout the four quarters.

“With his future, we need to make sure he’s 100 percent before he goes back out there,” Schroeder told BSB. “It’s kind of a week-to-week thing. I know he’s frustrated. But at the same time, he’s an unbelievable, constant teammate. He’s so smart.

“I know he can do a lot of things in life, but he can be a great football coach. He just gets it. He gets the emotions of the game. He loves talking with his teammates. He was a real added value on the sidelines.”

Those sentiments support Schroeder’s stance on why Harrison, beyond his freakish physical attributes, isn’t your average blue-chip recruit. Past his 4.6-second speed in the 40-yard dash and eye-popping burst off the line of scrimmage, Harrison possesses a mentality that truly makes him jump off the page.

“But I feel like they’d even go just a little bit harder if they knew what type of guy he was behind the first glance. If they saw him tonight, I think he can be the type of guy where he’s a captain-type guy — even at that level when you have 25 elite guys in the locker room.”

Right in Ohio State’s back yard on the north-central outskirts of Columbus, Harrison has undoubtedly been the Buckeyes’ top target in the 2019 class. Recruited heavily by head coach Urban Meyer and defensive line coach Larry Johnson, Harrison has had OSU in his top three for the past few months now with Penn State and Michigan rounding out the trio of Big Ten blue bloods.

“It’s just that I like all the schools,” Harrison said. “It’s different things about each school, you know? But through this, I call all the coaches, all the players and I’m picking the best of the best.”

As the process plays out, Harrison has no upcoming dates in mind for future unofficial visits — he took his official visits to Penn State (April 20), Michigan (June 21) and Ohio State (June 23). The Buckeyes begin their 2018 season Saturday at noon against Oregon State, but he plans to stay put in Lewis Center and watch the noon kickoff on ABC.

OSU enters the campaign without Meyer, who received a three-game suspension without pay after an investigation throughout August recently wrapped up. While he has been aware of the situation, it hasn’t swayed Harrison one way or another, despite the delay of his originally planned announcement for Aug. 14.

“I haven’t really been worried about that,” Harrison said. “I’m just going to let it play out however it’s going to play out.”