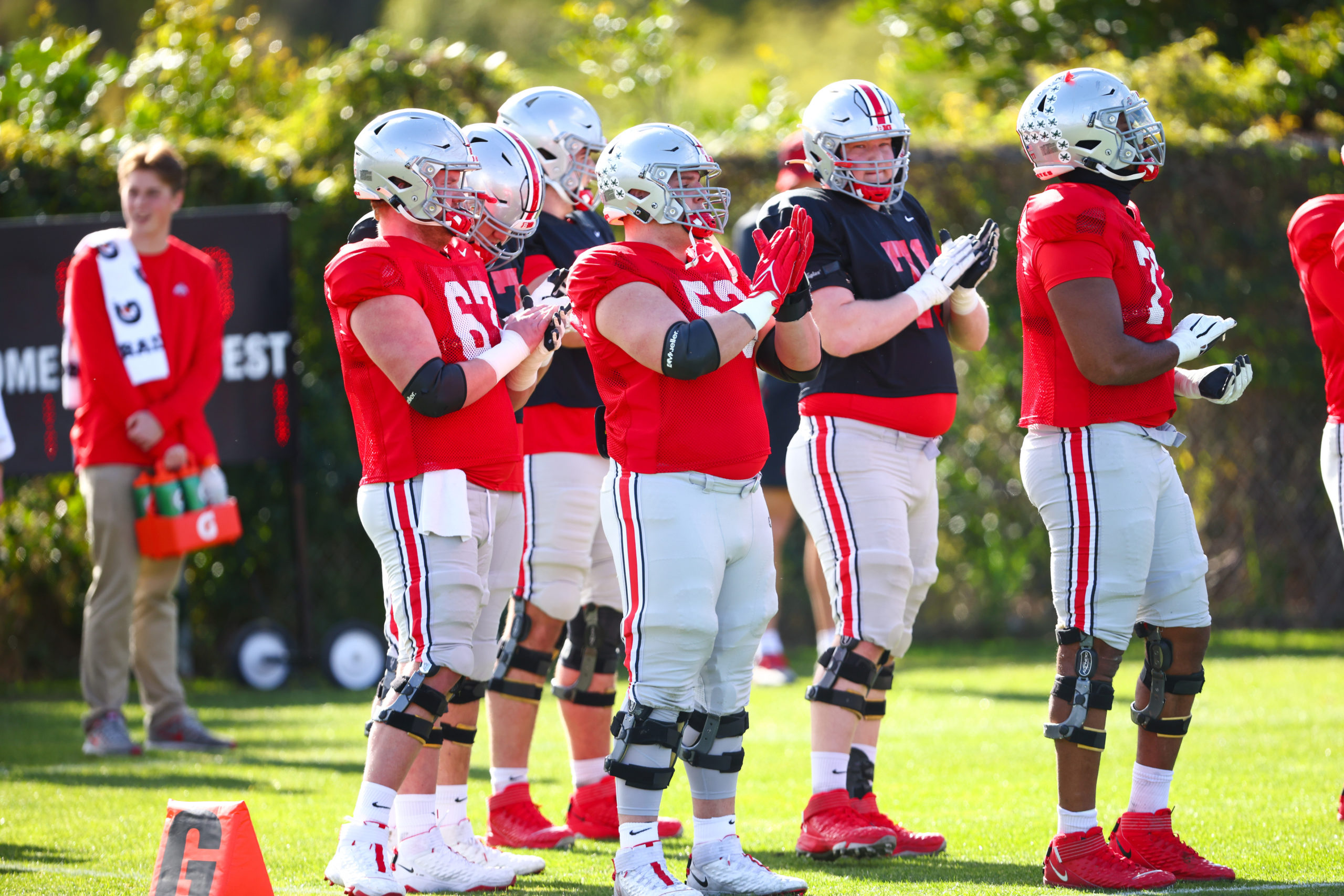 If you collected a shortlist of storylines from last year’s football season, the most interesting would be Ohio State’s five-tackle experiment on the offensive line.

When the Buckeyes traveled to Minneapolis for their season-opening contest with Minnesota, Nicholas Petit-Frere, Thayer Munford, Luke Wypler, Paris Johnson Jr. and Dawand Jones were the linemen standing left to the right. All five came to Ohio State with offensive tackle experience, yet only Petit-Frere and Jones started in their natural position.

Although unorthodox in theory and practice, then-offensive line coach Greg Studrawa believed those players offered the team its best chance to win football games. Ohio State’s run game produced a 26-carry, 201-yard performance in a 45-31 win over the Golden Gophers. Miyan Williams also recorded the Buckeyes’ longest run of the season — a 71-yard touchdown in the first quarter.

So far, so good for Studrawa’s plan. However, like many talented defenses after them, Oregon dismantled the offensive line with a quicker and more explosive front, exploiting the group’s weaknesses in Week 2. Ohio State barely cracked 100 rushing yards against the Kayvon Thibodeaux-less defense. While Tulsa, Akron, Rutgers and Maryland couldn’t replicate the success because of inferior talent, the Buckeyes’ more formidable opponents offered them a significant challenge in establishing the run.

Look no further than Ohio State’s first loss to Michigan in 10 years. The Wolverines stuffed the Buckeyes at the line of scrimmage, suffocating TreVeyon Henderson and Williams more often than not. It became evident earlier in the season that the experiment wasn’t working, but the loss to “That Team Up North” became a cherry on the hypothetical sundae.

After the Rose Bowl, Ohio State went back to the drawing board. Head coach Ryan Day parted ways with Studrawa and hired former UCLA offensive line coach Justin Frye to fill the role. Day said he wants Frye to find depth at the positions throughout spring practices and rank the most talented players before the season begins.

“On the offensive line, you want to find out that you have five guys and then find No. 6, 7 and 8,” Day said. “There are a couple of things to look at there, firstly in the running game, can you knock back the line of scrimmage, get physicality and movement. And then in the passing game, it’s firming up the protection.

“We’re going against really good guys on both sides of the ball every day, so you’re getting challenged, which is great. Our defensive line has been challenging the offense and vice versa. You want to see how you stack up every day against each other in practice, how you compete. We have talented guys up there but it’s the discipline and skill you want to create over time.”

If the first six practices are any indication, Ohio State has moved to a more traditional offensive line involving two tackles, two guards and a center. In the first practice with media attendance, the front five included Johnson, Matthew Jones, Wypler, Donovan Jackson and Dawand Jones.

Johnson came to Columbus as the No. 1 overall tackle in his class. He was a backup to Munford at the position before breaking into the starting lineup at right guard last season. Day said the Cincinnati native learned valuable lessons from his time in the interior, but he is looking forward to seeing Johnson return to his natural position.

“We recruited him as a tackle, and we always felt like he was a tackle,” Day said earlier in March. “To his credit, he wanted to get on the field last year and learned a lot from playing guard – his pad level and understanding calls. It will pay dividends for him down the road. But now, making the transition to tackle, he’s played it his whole life other than last year, so it’s not like it’s new to him. This will be his first time starting there, and he will grab onto it and own it. His approach every day, and his work ethic, all those things are really off the charts.”

Matthew Jones looks poised to take over Munford’s left guard spot he vacated. Last season, he was the No. 6 offensive lineman and rotated wherever Ohio State needed him. Matthew Jones stepped in when Munford was hurt against Tulsa and Akron. While he can be the utility lineman, Day said he wants Matthew Jones to feel comfortable and develop more chemistry with a more consistent role.

“Everybody is different, but I do think that being on the offensive line having some chemistry, being at a spot, and having the same guys on your sides over and over does bring a level of consistency that can help a play,” Days said. “Some guys do better when they compete every day, having someone push them. Some guys, once they’re in a role and they aren’t looking over their shoulder, they feel like they can focus and do a little better. We’re hoping this is a great opportunity for Matt, being thrust into this role, so far, he’s done a great job, but he’s got to keep growing. Like every position at Ohio State, the expectation is that you’re one of the best players in the country at what you do.”

Day has not commented on Wypler in two availabilities with the media. However, that’s no indication of his role changing. With the recent news that Harry Miller would medically retire from football, Wypler seems to be the unchallenged front runner at the position. Day did reveal that Matthew Jones would likely be the backup center if Wypler needed a break or suffered an injury.

Jackson, a former No. 1-ranked guard in the 2021 class, continues to impress Day and his staff. The 6-4, 300-pound sophomore is one of the only players with guard-like size on the Ohio State roster. That, coupled with superior athleticism, allowed him to take the lead for the right guard spot Johnson vacated.

“Donovan is very athletic, very smart, great young man,” Day said. “Now it’s about acquiring that discipline and skill needed to play guard at the highest level. He can do it. He’s very gifted athletically, very smart and conscientious. The more reps he gets, the better he’s going to be.

“I would say Donovan was probably offensive lineman No. 7 or 8 last year. Athletically we felt great about putting him in the game, but the experience of a true freshman who came in during the summer didn’t have a full year. That’s a tough ask. I’m not saying he couldn’t have done it, but that’s why we had him do some of that on-the-ball tight end stuff. We felt something was there, but we didn’t want to overwhelm him.”

Dawand Jones returns for his final season as the starting right tackle. Day said he wants the 6-8, 360-pound lineman to develop a more consistent approach to his practices, claiming it will make him a more well-rounded player in the fall and help his NFL Draft stock in 2023.

“There was conversation inside the building (about Dawand potentially going pro),” Day said. “You identify where you think you could go in the draft and decide if that makes sense for you in the future. He wanted to come back and be a first- or second-rounder. That’s his goal. He’s been challenged with a set of things he needs to get done if he wants to get there. I don’t think there’s any question that he can be one of the better tackles in the country.

“Now, whether he is or not will depend on some of the things he has to get accomplished here in the offseason and then during the season to get to that point – and consistency will be one of them. But he’s done some good things, and I think he knows what he needs to get done.”

Day and offensive coordinator Kevin Wilson have held firm that this collection of talent would be the starting five linemen if Ohio State started its games this spring. However, there is still much time before the team hosts Notre Dame in Columbus on Sept. 3, leaving much room for competition up front.

Last season, the Buckeyes proved that they are willing to do whatever it takes to win games, even if it means starting five tackles on the offensive line. While that might not be the approach for this fall, Day said he would continue searching for the best players to take the field when games start.

“We’ll look back up in a couple of weeks and see where we are,” he said. “We’re in the middle of it right now, asking every guy to figure out their strengths and weaknesses, the things they need to work on, and if they’ve addressed those things at the end of each week. Then you come up for air and figure out the next challenge as an individual. As we get closer to preseason, we start to come together with a little more as a group, but the focus right now is getting together individually.”