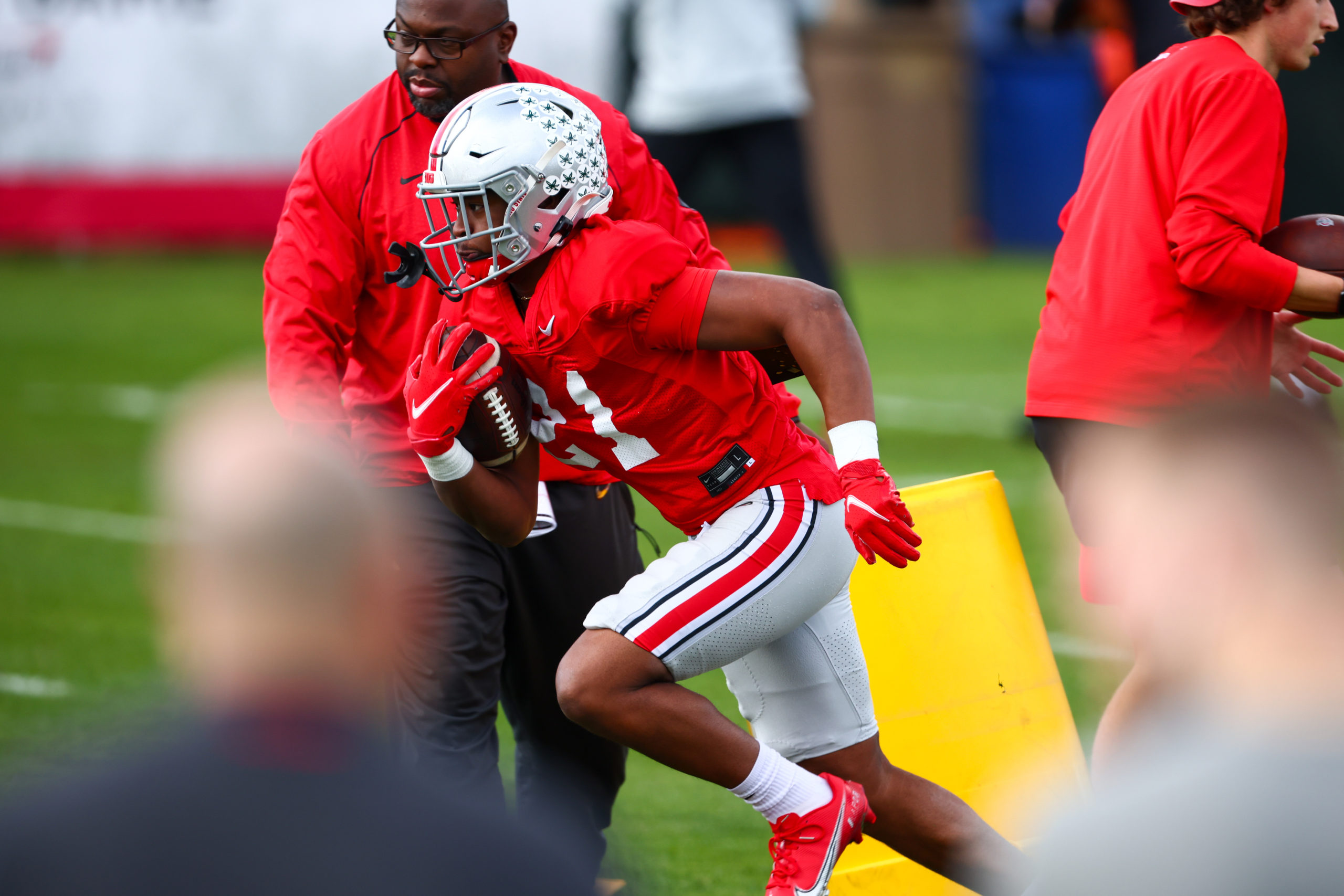 As it continues through the 2022 offseason and into the back half of spring practice, Ohio State certainly is not lacking skill-position talent on the offensive side of the ball. One look at the roster or a second at recent recruiting rankings make that abundantly clear.

The Buckeyes have, in the latter’s estimation, four former five-star prospects, nine former four-stars (almost all of whom checked in within the top 150 of their respective class rankings) and four three-stars. Even if some of those highly touted recruits haven’t yet panned out, they came to Ohio State with a major pedigree, and are parts now of one of the nation’s most explosive offenses.

That can be a blessing and a curse for head coach Ryan Day, the director of said offense. With such talent comes the burden to deploy it, and as the Buckeyes work through a critical spring camp in Columbus, the fourth-year head coach is still working to determine just how many of those players he can realistically work into an offense.

“We have to figure out how many guys deserve to be on the field,” Day said March 29. “We have a lot of experience coming back, but we have a lot of young guys coming on. As we continue to build that we can figure out how to get these guys on the field to best attack the defense. Evan Pryor, Gee Scott Jr., those are weapons and we have other guys who are built like that. That’s exciting. The more of those guys we can have in the stable the better, and we do have some talented guys.

“It isn’t so much like a role – some of it is – as it is just putting guys in a position to be successful based on their skill set. Not asking someone to do something they can’t. Now, the more they can do, the more they can play.

“It’s the same on defense, if someone is a really good pass specialist, but they can’t stop the run, they’re only coming in on third down. If you’re really good against the run but not as much against the past, you’re probably playing on first and second down. A really good cover guy who struggles against the run you’re probably in a nickel situation playing against the pass. It’s the same on offense. If you’re a wide receiver who can block in the running game it gives us a lot of flexibility. A tight end who can block a seven-tech but then go out and run a route against a safety or a linebacker gives us a lot of flexibility. The more guys who can do many things, the better. Evan Pryor for example can run a route on the outside and line up as a running back in the backfield. That gives us something. The more someone can do, the more of a weapon they are for us.”

Day mentioned redshirt freshman tailback Evan Pryor and junior tight end Gee Scott Jr. by name, but the Buckeyes have several players in similar positions as they approach the end of March and the turn into April. Ohio State gave 12 skill position players at least 100 offensive snaps a season ago and returns eight of those players for this season, with wideouts Chris Olave and Garrett Wilson, tight end Jeremy Ruckert and halfback Master Teague III departing.

Those four took up a ton of snaps – combining for 2,136 offensive reps – meaning there are plenty of snaps to go around, but Day has signaled that he doesn’t expect any major changes to his offensive scheme. That’s good news for the eight returning, who should be able to step into either equal or larger roles barring practice struggles, but it does present an interesting challenge for the Buckeyes. Assuming that a 12-man rotation is near the upper limit of what Day wants with his skill talent – the Buckeyes had nine skill players above 100 reps in (shortened) 2020, 12 in 2019 and 2018 and 13 in 2017 – there are just a few openings for new skill players to emerge.

It seems that Pryor and Scott have curried favor with the staff, which works out well with gaps at running back and tight end as Teague and Ruckert depart. There are players ahead of them on the board, but those players were already in the rotation, and someone new is always going to need to step up. Pryor’s placement as RB3 and Scott’s as TE3 or TE2 seem nearly cemented without obvious competition from within their position rooms.

The other two spots lie at wide receiver. The lion’s share of Olave and Wilson’s snaps – No. 1 and 3 in receiver snaps a season ago respectively – will likely fall to the new starters out wide, while Jaxon Smith-Njigba continues his emergence as Ohio State’s true top receiver from the slot. Julian Fleming and Marvin Harrison Jr. are the presumed replacements there in spring camp as the next receivers on the board for snaps a season ago, with Emeka Egbuka behind them.

The numbers will increase for all three, just as they will at tight end for Ruckert’s primary backups in Cade Stover and Mitch Rossi, but the question here is about the new members of the plus-100 club. Fleming, Egbuka, Harrison, Rossi, Smith-Njigba and Stover were already there last year, as were sophomore TreVeyon Henderson and redshirt sophomore Miyan Williams at halfback.

That receiver spot seems to be the hardest to get a feel for, largely because of the talent involved. Receivers coach Brian Hartline has racked up three five-stars and five four-stars on the spring roster (this will increase with the arrivals of Kojo Antwi and Kaleb Brown) and has – again assuming that Day’s rotation remains as it has been – six spots to work with in a group that Day has praised ad nauseam despite its losses to the draft.

“I feel good about the wide receivers,” Day said on March 29. “We’ll have to watch the film and see continually where it’s at. Any time you lose two really good players like that on the outside, it’s a lot of production to replace. While guys are talented, they’re going to have to step up and make those plays. Those are two players who made a lot of clutch catches, we counted on them to make plays on third down, make tough catches when it mattered most. We think we have some really good candidates to push forward and be those types of players but we’ll see. It’s going to take a lot of hard work. It won’t just happen in five or six practices, it takes time and will develop through the season, but I think we do have some really talented players in that room and the depth is being built.”

The five-stars are all but locked in, as is Harrison, leaving fifth-year senior Kamryn Babb, redshirt freshman Jayden Ballard, freshmen Caleb Burton and Kiyon Grayes to pick from. The elder statesmen are the easy favorites, but the Buckeyes still have an entire offseason to work through before making that choice. For now, the job of Hartline and his counterparts is thinning the herd and building comfort with a core of players to surround superstar redshirt sophomore quarterback C.J. Stroud with.

“You have to figure out how many guys you’re comfortable with at a position before you start rotating,” Day said. “We’re not just going to do that because it’s little league and everyone gets to play, we’re going to do it because guys deserve it, they’re putting in the work.