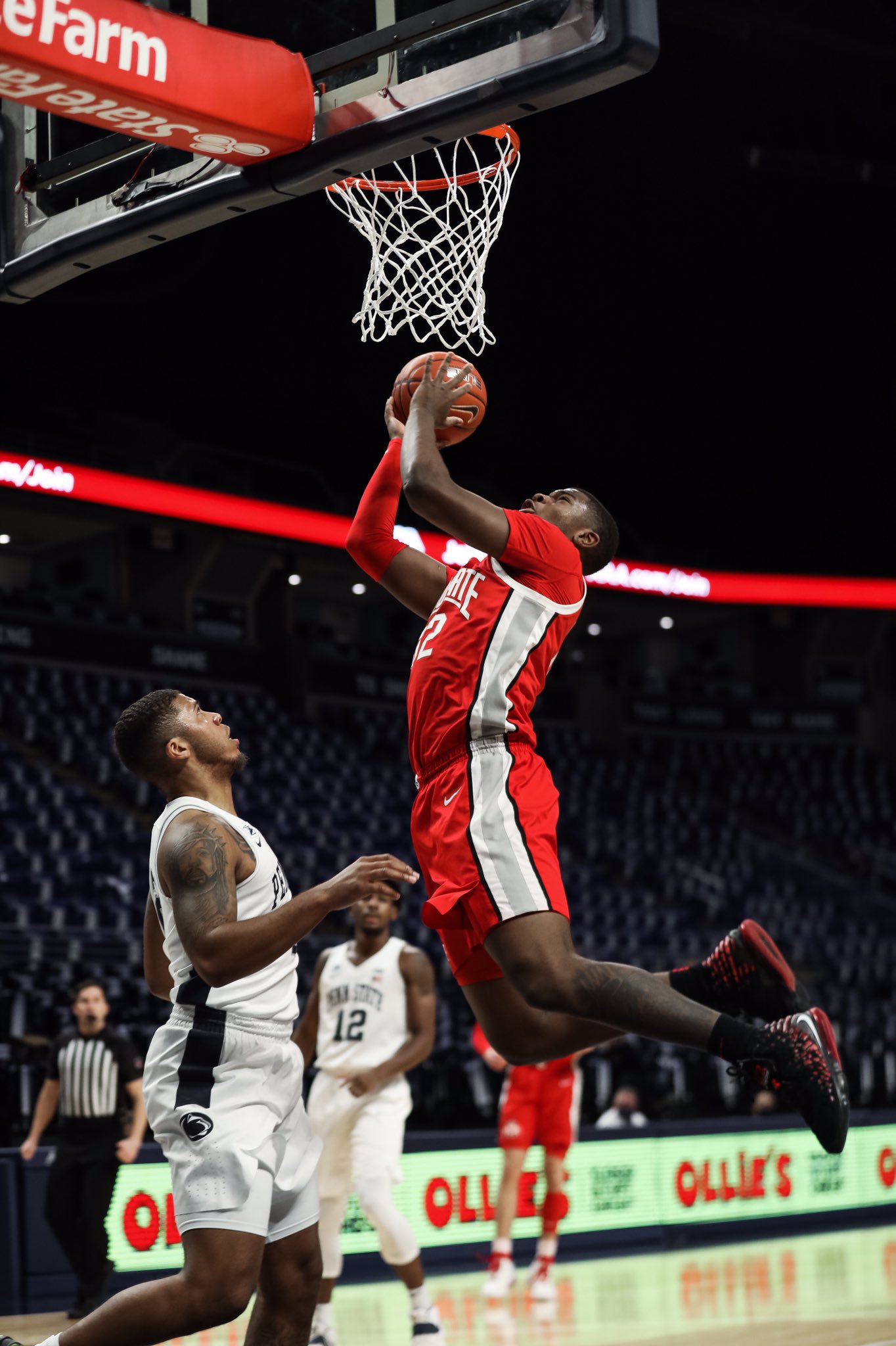 The No. 4 Ohio State men’s basketball team overcame an eight-point second-half deficit to defeat Penn State 92-82 at Bryce Jordan Center on Feb. 18 for its seventh straight win and No. 10 in 11 games.

“Our bench really carried us, and then players win games, and our players made plays offensively,” Ohio State head coach Chris Holtmann said. “We were not good enough defensively; we’ve got to coach and play better defensively. But our group collectively, offensively, was really good again.”

Penn State took its first lead since the opening minute on a three-pointer by sophomore wing Seth Lundy to take a 50-49 edge 2:50 into the second half.

Walker responded with a contested three-pointer at the end of the shot clock before Penn State junior guard Sam Sessoms made a layup to put the lead at 61-54 with 14:05 left.

Walker and Washington took over for the Buckeyes, ripping off 11 points on a 15-0 run across 4:14 that was capped by a three-pointer from freshman guard Eugene Brown to take a 69-61 lead with 9:51 remaining.

“Overall, just our defense,” Walker said of the difference on the 15-0 run. “They didn’t get a lot of second-chance points, limiting their offensive rebounding. Our stops got us going. We didn’t let our offense affect what was going on at the other end; we just got big-time stops.”

After Walker hit a tough pull-up mid-range jumper along the baseline to push the Buckeyes’ lead to 74-66 with 7:57 left, Penn State cut the deficit to 76-72 with 5:12 to play on a layup by junior guard Izaiah Brockington.

The home team did not surrender, but the visiting Buckeyes pushed their lead to 80-72 on two foul shots by senior forward Kyle Young and a layup by Jallow off a steal by junior wing Justin Ahrens.

“K.Y got to the line and made some free throws,” Walker said, “and once we saw the ball go in a couple times, we just got comfortable and we made our run late in that second half.”

Junior guard Myreon Jones, Penn State’s leading scorer, knocked down a three-pointer from Brockington to cut it to 80-75 with 3:28 left. Liddell extended the lead to 85-76 on a dagger of a triple with 1:36 on the clock.

Junior guard Myles Dread answered with a triple for Penn State, but Washington converted and and-one with 52 seconds left to push the lead back to nine at 88-79.

The Nittany Lions led the game 2-0 through the game’s first minute, but that was the only lead they held in the first half. Ohio State answered with a 9-0 run on three pointers by Washington, Ahrens and Liddell to take a 9-2 lead just 2:33 into the contest.

After Penn State cut the deficit to five with 9:06 until the midway point, Liddell drilled a couple of mid-range jumpers to push the Scarlet and Gray’s lead to 31-22 with 7:55 until halftime.

Ohio State’s nine-point first-half lead evaporated in just 2:11 due to a 9-0 spurt on a three-pointer by Lundy followed by a pair of triples by senior guard Jamari Wheeler to tie the game at 31 with 5:44 until the break.

After a back-and-forth battle in the final five minutes of the first half, Ohio State led 44-43 before Ahrens nailed a three-pointer in the corner from graduate forward Seth Towns as the shot clock expired.

Holtmann came away from the contest pleased with the play of his veteran guards in Walker and Washington.

“Having older guards is really, really important because they’ve been through a lot of these moments,” Holtmann said. “And those guys are fearless too. It’s how they play, it’s who they are, they’re fearless. But they also understand what winning possessions late look like.”

Young gave Ohio State a great overall effort, scoring eight points, dishing five assists, and posting two steals and two blocks. Ahrens had nine points on 3-of-7 shooting from beyond the arc, and Jallow added nine points off the bench.