No. 15 Ohio State Women’s Basketball Shoots Lights Out In 100-85 Win Over Purdue 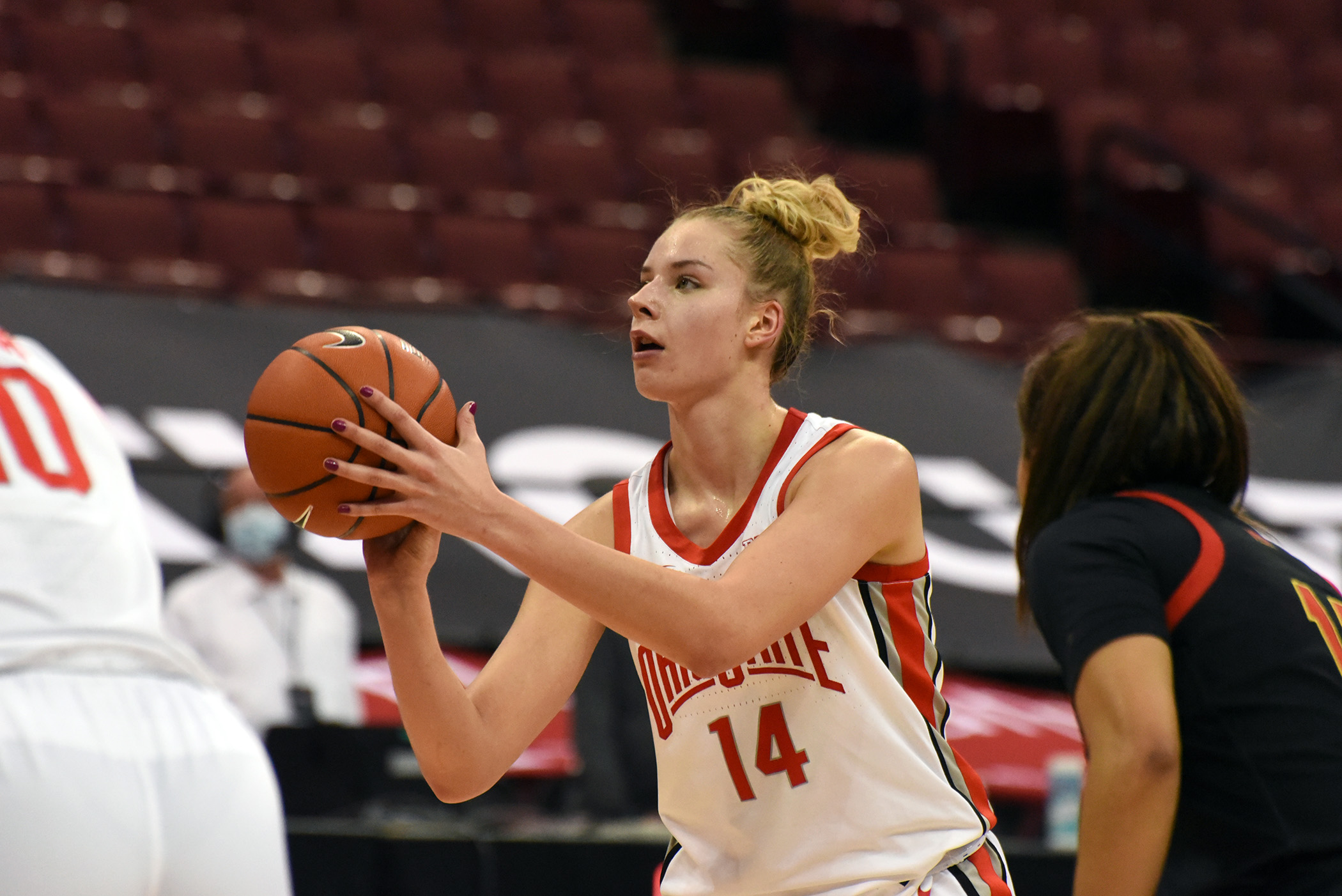 After an up-and-down first quarter, Ohio State women’s basketball rode a 26-5 run in the second quarter and 58.2-percent shooting from the field all the way to a 100-85 win over Purdue.

“We knew we had to come out tonight and just put a full effort in and make sure that we really locked in to do what we need to do to be able to get the win,” senior guard Braxtin Miller said.

Sophomore guard Madison Greene was unavailable for Ohio State for the first time this season. Freshman guard Kateri Poole replaced her in the starting lineup and finished with nine points and seven assists. She shot 3 of 6 from three in the contest.

Poole said she had some “freshman jitters,” but that she was happy with how she played overall in her first collegiate start.

“Definitely knew I had a big role to step up and play for, so this game was for Madison and the rest of the team,” Poole said. “I think overall I did a solid job. There’s always room for improvement no matter how good you do.”

Without Greene, the Buckeyes relied on their other primary scorers, and they stepped up. Junior forward Dorka Juhasz (23 points), sophomore guard Jacy Sheldon (19), Miller (15) and junior forward Aaliyah Patty (12), Ohio State’s four leading scorers this season not named Greene, combined for 69 points and shot a combined 28 of 40 from the field in the 15-point win.

Juhasz also finished with a double-double by adding 10 rebounds in the contest.

“I thought on offense we did a great job,” head coach Kevin McGuff said. “Kateri really helped us move the ball and share the ball, she had some great passes and (redshirt freshman guard) Rikki (Harris) had some good minutes, and then Jacy and Braxtin were their normal selves, and I thought the post players, when we got them the ball, very efficient. You look at their numbers and the number of shots they took and the way they finished, they were really good.

“We probably missed Madison obviously more on the defensive end as much as anything.”

Ohio State trailed Purdue 27-23 with 9:05 left in the second quarter after a make by junior guard Kayana Traylor. That would be the largest deficit the Buckeyes would face the rest of the game.

A jump shot by Miller started a run of 18 straight Ohio State points that gave the Buckeyes a 41-27 lead. That lead ballooned to 49-32 on what ended up being a 26-5 Ohio State run that spanned 6:03 of the second quarter.

Miller said it was the defense, which forced seven Purdue turnovers in the second quarter alone, that helped spark the major run.

“I think our offense was pretty much efficient the whole game,” Miller said, “but being able to get some defense going and some stops and steals just really picked up on what we needed to get done and start making things move a little bit more in our favor.”

In a portion of the run, starting with Miller’s jumper and ending with a three by Poole to make it 44-30, the Buckeyes made eight consecutive field goal attempts, including a pair of makes from deep.

That ended up not even being the longest stretch of made shots in the game. In the fourth quarter, Ohio State used a stretch of 10 straight makes to go up 99-74 and put the final nail in the coffin for Purdue’s chances at a comeback.

Ohio State led 100-76 with three minutes to go before Purdue went on a late 9-0 run to cut the final deficit to 15, making a lopsided victory look a bit closer than it truly was.

Off the back of the aforementioned second quarter run, Ohio State led 49-36 at halftime, with Juhasz leading the team with 13 points and seven rebounds on a perfect 4-of-4 shooting. Sheldon also made major contributions with 11 points, two rebounds and two assists in the half.

The Boilermakers were led offensively by fifth-year senior forward Fatou Diagne and junior guard Brooke Moore, who had 21 and 18 points, respectively.

“We were really good on offense,” McGuff said. “I thought we shared the ball, we had 22 assists and eight turnovers, I thought we really did a good job making the extra pass, sharing the ball, not settling until we got the shot we wanted, and then they were efficient on the other end.

“They did similar things and we were not good defensively. I thought we really struggled on that end of the floor.”