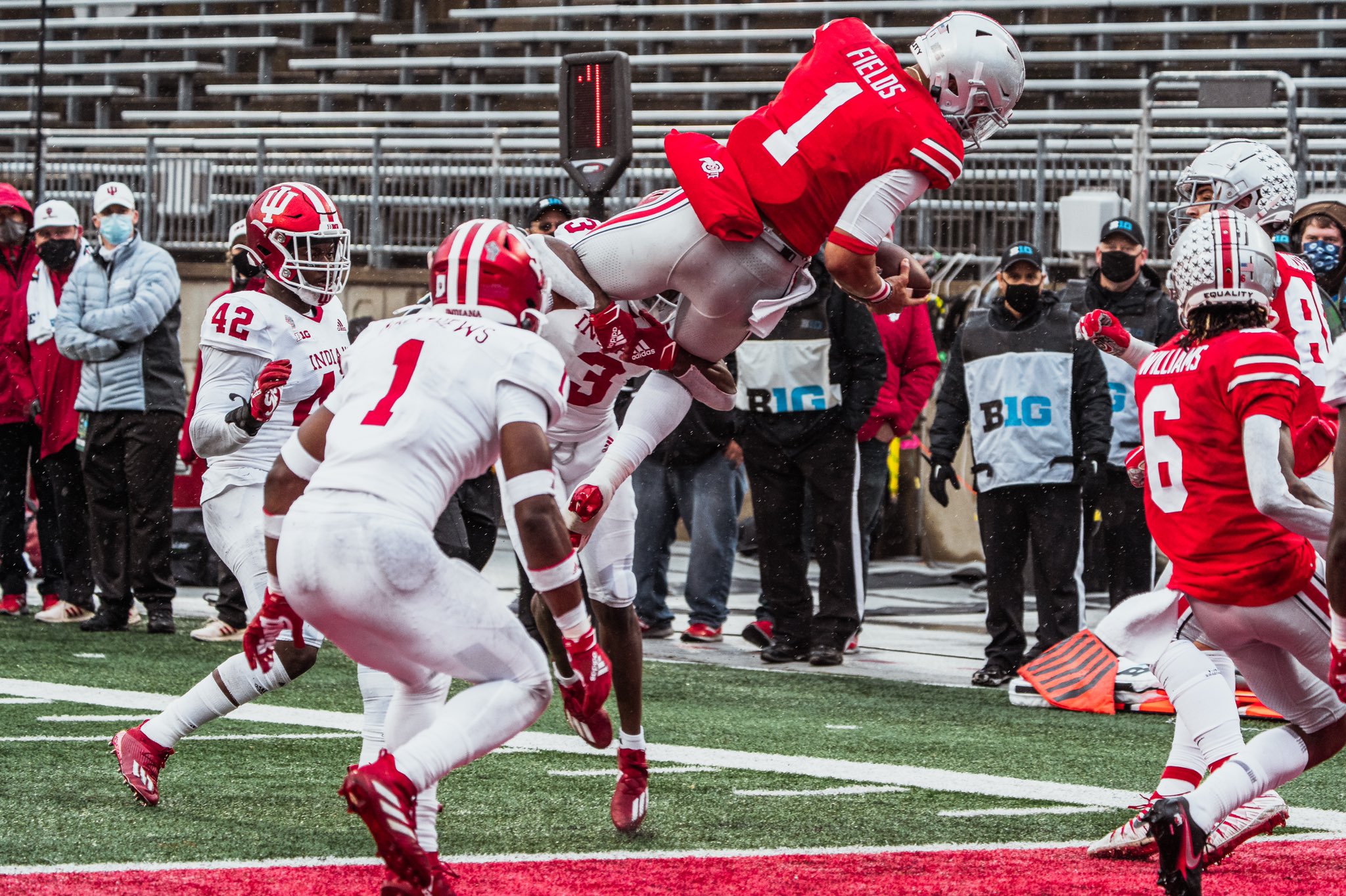 After Indiana punted on its first possession, it took 33 seconds for the Buckeyes to take a 7-0 lead. That was enough time to go 75 yards in two plays – a 65-yard run-and-catch from Justin Fields to sophomore receiver Garrett Wilson to the 10 and a toss to Wilson on the next snap with 13:05 left in the first quarter.

On the Buckeyes’ next drive, Fields threw his first interception of the season when Jamar Johnson grabbed it at the IU 23 and returned it 33 yards to the OSU 44 but the Hoosiers turned it over on downs at the 36.

Fields threw another interception in the first quarter at the IU 43 on a tipped ball corralled by Jerome Johnson. The Hoosiers went three-and-out.

Indiana made it 7-7 at 11:03 of the second quarter by going 84 yards in 3:05 with the biggest of  the six plays being Michael Penix Jr. connecting for 68 yards with Miles Marshall to the 3.

Two plays later Whop Philyor, who had a 10-yard reception to convert a third-and-8 from the Indiana 19 to keep the drive alive, had a 4-yard TD catch.

The Buckeyes gained a 14-7 lead at the 8:57 mark of the second when Master Teague used strong blocking on the edge to run 41 yards. The seven-play, 75-yard, 2:06 drive was made possible by Chris Olave’s third-down catches of 16 and 8 yards for first downs.

Ohio State extended the lead with Teague’s 2-yard rush with 4:32 left in the quarter. Trey Sermon had three carries for 28 yards; Jaxon Smith-Njigba had a key third-down catch at the IU 48 and Fields scrambled for a 30-yard run to the 2 to set up the score.

The game turned even further for the Buckeyes thanks the defense, which after allowing a 51-yard catch by David Ellis to the 13 on blown coverage, got the ball back on the ensuing play. Ellis caught the ball at the 5, but Baron Browning loosened it with a reach around, Pete Werner smacked Ellis and Browning recovered the fumble at the 7.

OSU went 93 yards in nine plays, consuming 2:54 before Fields escaped pressure and ran for a 9-yard TD, leaping into the end zone from the 2, with 17 seconds remaining before the half for a 28-7 advantage. Olave came up big again in the series. Facing a third-and-4 from the OSU 13, he had a 31-yard catch to spark the drive and later added a 13-yard catch.

Ohio State began the second half just like the first with Fields finding Wilson for a 9-yard score to make it 35-7 at 12:10. Wilson had a 39-yard grab earlier in the drive  and Fields added an 11-yard run as part of the six-play, 75-yard march.

Penix continued to torch the OSU secondary when he hooked up with Tyler Fryfogle for 63-yard touchdown on the next series to lower the deficit to 35-14 with 10:48 left in the third quarter.

Wackiness ensued when the Buckeyes took over as Fields was in the grasp of tacklers when he wildly threw his third interception. Jamar Johnson was again the culprit. He picked it off at the OSU 40 and ran to the 16 where the intended receiver, freshman receiver Julian Fleming, ran him down and forced a fumble that left tackle Thayer Munford fell on.

Undeterred, the Hoosiers limited the Buckeyes to 5 yards on three carries and after the punt made quick work for a 35-21 score. They used five plays to 60 yards with Marshall grabbing a 12-yard from Penix, Philyor adding a 15-yard catch and Fryfogle scoring with a 33-yard reception with 5:14 left.

Ohio State wasted a 32-yard gain by Teague when freshman Jake Seibert, kicking for the injured Blake Haubeil, missed from 44 yards on his first career attempt.

Cornerback Shaun Wade got some redemption for the defensive backs with a 36-yard pick six with 49 seconds remaining in the third quarter to make 42-21.

Ohio State used up 5:47 and went 68 yards but was stopped on fourth-and-1from the 7 when Fields’ pass in the flats to Luke Farrell was incomplete with 4:39 to play.

The Buckeyes forced a punt after three plays and took over at their 32 after a 55-yard punt but punted back to the Hoosiers who started at their  22 with 38 seconds left.

Indiana had a last-ditch pass and lateral that ended at the OSU 34.